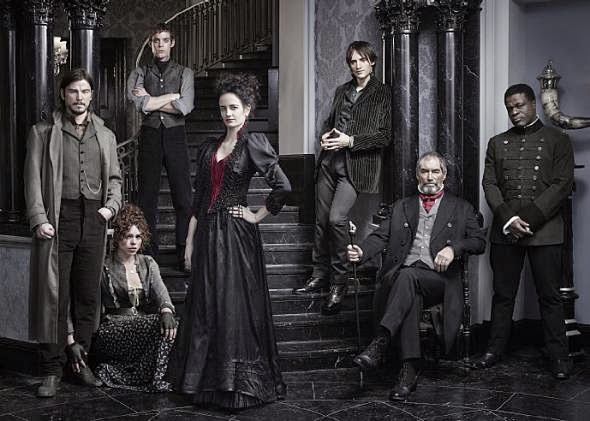 Sunlight! Actual bright sunlight! Am I watching the right show? A boy walking through a sunlit field, quoting Wordsworth until he reaches the decomposed body of a dog, seething with maggots. It’s a young Victor Frankenstein. That night, a feverish and sickly Victor and his mother talk about death, right before his loving mother coughs up blood. She’s tended to by doctors and servants, but ultimately dies and is buried while Victor realises that, contrary to all the poetry, “death is not serene.”

This is when child Victor sets off on his voracious study of anatomy, of life and death.

To the present where a cowering Victor is facing his “first born”. The first monster demands Victor face him and dramatically confronts him (with beautiful, flowery language to prove his facility of speech). He recounts his own creation and we flashback – he didn’t peacefully wake, he work in terrified agony and how horrifying it was to Victor. Victor fled in terror – the Monster’s first human interaction was of rejection. He was abandoned to a small room, experiencing the world through a window where he saw humanity, its cruelty; he studied Victor’s books, his poetry. He points out the irony of Victor doing something so cutting edge that it was the very pinnacle of modern progress while still holding to the romantic, pastoral words of Keats and Wordsworth.

Victor tries to run but the Monster stops him, when Victor asks about the murder of Proteus, the Monster calls it a mercy – to abort him before he knows pain. He recounts coming to London to find Victor – being attacked but also being shown kindness by a wonderfully dramatic actor (Vincent) who introduced him to the theatre. Not the Shakespearean theatre he prefers – but a penny dreadful, gory spectacle theatre – the Grand Guignol. The wonderfully verbose Vincent dubs the Monster Caliban and gives him a job running things backstage.

We have a nod at the irony of him supporting actors who died every night on stage, then to be reborn; though he kept to the shadows because not everyone was welcoming of his disfigured face. His tale finished, Victor finally asks what he wants – and Caliban tells him to walk with him and see

As they walk, Caliban notes that Victor has learned and his “younger brother” was better made than him – prettier, faster learning, gentler – though he’s taken aback to learn Victor named his brother; even more when Victor calls Caliban “Demon”. Caliban wants love (not Victor’s and is quite angry when Victor rejects him again because Caliban doesn’t seek his acceptance), he wants a companion. And Victor will make him an immortal woman or Caliban will kill all Victor loves; Victor isn’t intimidated by death threats. It is life that hurts him, not death.

At Sir Malcolm’s, Vanessa has a vision of Mina, begging her for help. And she goes to see him (interrupting his masterful performance of endurance and pain).

In their dockside pub, Brona and Ethan have sex. Afterwards she continues to struggle with her tuberculosis; he asks if she had medicine, but she can’t afford any.

Ethan goes to see Malcolm and Vanessa for another job – for money (presumably for Brona’s medicine). Which is great because Malcolm is planning another expedition (Vanessa is left to explain the details “as far as she sees fit”.) After an uncomfortable moment when Vanessa explains she had a vision (which Ethan accepts), Vanessa tells Mina’s story: becoming engaged to Jonathon Harker and then becoming involved with a creature that now controls her.

Their expedition takes them to London Zoo (Vanessa heard animal noises in the vision) while Malcolm warns Ethan about Vanessa’s gifts making her “desireable.” Vanessa gives Malcolm A Look. He hurried moves on (even Sir Malcolm is intimidated by Vanessa’s Looks). As they walk something stalks around them and Vanessa declares something is wrong – and that Malcolm hasn’t told her something (making Malcolm a very brave man).

A whole pack of wolves appear; Malcolm draws a gun, Sembene draws knives but Ethan tells them not to fire and to hold still. Ethan faces the four wolves and puts his guns away – holding his ungloved hand out to them. The snarling lead wolf takes Ethan’s hand into its mouth – but doesn’t bite him. The pack leaves. Mina leads them to a monkey cage – where a man is eating the monkeys. Raw. He leaps at Vanessa and Ethan punches him – but Malcolm stops him shooting the man. Malcolm opts for chains instead.

They chain the man and Sembene goes to find Victor. The man is called Fenton and is a creepy servant (Renfield like) of the vampire. He super creepily talks about his master, the light ending, darkness vampires – and Amunet and Amun Ra. He insults Vanessa and Malcolm beats him demanding to know where his master is until Ethan takes exception.

They gather for an argument, Ethan objecting to a child being so abused while Victor points out the hypocrisy of Ethan objecting to brutality when he fought in the Indian wars “pacifying” whole nations into non-existence. Victor discusses ways of curing Fenton of the vampire infection; a useful thing to know if Mina is also afflicted with it. Ethan objects to experimenting on Fenton – Vanessa tells him where the door is: “we here have been brutalised with loss, it has made us brutal in return.” Malcolm has his own rousing argument – they need to be loyal to each other, no other – it’s not for the weak or the kind and that none of them are kind. He demands their mutual oaths of loyalty or for them to leave. Ethan pointedly looks at Vanessa before saying he’s with her.

Oaths made, Vanessa confronts Malcolm about what he’s not telling her – and Malcolm admits the creature probably wants Vanessa and Mina is just bait. But he claims ignorance as to why – but he admits that Vanessa is bait. Vanessa seems to accept this.

When they’re alone, Vanessa and Ethan talk about where he’s staying – and Brona. And Victor has a dramatic speech for Malcolm about them being responsible for Fenton – if you transform a life you are responsible for it.

In his cell, Fenton seems to greet his master.

Oh, someone definitely has a grounding in the classics and, for once, uses it perfectly. The poetry of the young Victor, his experiences, the birth of the first monster (complete with wonderfully meta reference to Percy Shelley, the husband of Mary Shelley who wrote Frankenstein), he considered an abomination because of how he was created – yet him speaking with the beautiful, elaborate language of a Shakespearean actor. His philosophy, his glorious rant – it’s perfect.

The whole aesthetic of the show is incredible.

Vanessa and Malcolm continue to hit the perfect notes as well – Vanessa’s strength and pain and endurance and will – and Malcolm’s barely holding himself together in his grief and worry are both excellent performances.

I don’t understand why Sembene gets such top billing in the show credits and advertising when all we see of him is opening doors. Either his character is going to vastly improve or they’ve literally splashed him on the promotional material to give the impression the show as a main Black character.

I think we have more hints of Ethan the werewolf, though I do rather suspect a twist in the offing

One thing that is worth noting is the depiction of nudity on Penny Dreadful which rather breaks the pattern. We’ve had non-sexual male full-frontal nudity with Proteus (which is unusual in and of itself), but even the sexual nudity hasn’t done the standard TV practice of showing the women completely naked while the men manage to keep their trousers on (Da Vinci’s Demons I’m looking at you). Ethan and Dorian  have shown as much – or more – skin as Brona.