Tales of the Hidden World by Simon r Green 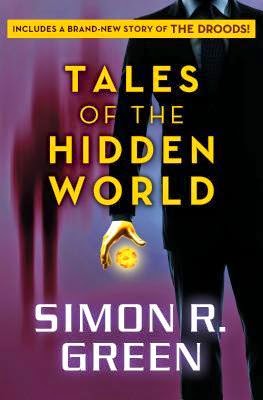 This short story collection has an excellent, coherent, link between the best stories in the book (something that many collections miss) – they’re all extremely, incredibly eerie. There’s a sense of darkness, of creepiness that permeates every story here. Not otherness – speculative fiction lends itself to otherness and weirdness – but crawl down your spine creepiness. For most of them

There is a theme of death that carries through many of these stories – the nature and fear of death in particular and even a question of whether death is worse than life. A Question of Solace takes an old man who has lived an exciting and productive life, finally slowing down and losing his touch but not realising it; his memories, his doubts, his guilt over his legacy all combine to be a beautiful, powerful and moving goodbye scene for him – a time when death is certainly not to be feared or grieved, but a life celebrated. Dorothy Dreams is a powerful story of Dorothy from Oz growing old, being forgotten, neglected in her old age, finally getting to return to Oz. It’s a beautiful interpretation of that old story – and so many other stories – and another story that celebrates death even as life is seen as something painful to endure.

Find Heaven and Hell In the Smallest Things takes it to the next level, with Paul, the protagonist, enduring a living hell after his life was “saved” after a terrible accident; saved but now doomed to work the rest of his days imprisoned in a mechanical suit, enduring horrendous conditions to serve the government with the incomplete memory of his dead wife in the suits computer for company – a wife who cannot remember the last 3 years of their marriage or that it had fallen apart before her death. The excellent writing really does bring home a fate worse than death and any release as a relief.

Down and Out in Deadtown also follows the theme of death but to a far more cutting degree – the dead rises in a zombie horde… that doesn’t hunger. They’re dead… but moving. Not moving much or doing anything – they’re just… there. And people are happy until they realise the returned dead aren’t who they want them to be so they’re shuffled away and forgotten, rendered invisible; and all of this is told through the eyes of a homeless man – shuffled away and forgotten, rendered invisible. The comparisons and insight is razor sharp and very very true.

Many of these stories make me want to read more in the universe – A Question of Solace certainly will have me looking up the rest of the Drood series – supernatural James Bond’s trying to deal with world wide supernatural and sci-fi problems, with a side order of moral quandaries as they have to do terrible things for the “greater good”? Sign me up for that – exciting, well written and full of surprising depth and characterisation, I’m sold. I’d already read Street Wizard in another anthology and what I said then still applies. It’s All About The Rendering is probably the only story in this book that isn’t a little dark in some way – it’s a surprising break among the deep, dark, grittiness, hard choices, and uplifting death: a fun, whacky story of a house on the border between normality and wonder. And I really want to read more. It does seem completely out of place in the book, however.

From Out of the Sun, Endlessly Singing is part of the theme of hard, morally questionable choices along with A Question of Solace – thought provoking as well as a fascinating story; we have the remnants of humanity facing one solution to save the human race – the ultimate End that can only be achieved by a truly terrible Means. There’s the moral quandary of just what can we do in the name of the greater good?

Food of the Gods; He Said, Laughing and Soldier, Soldier take the other side – killing and death as tragedy and as brutality. Not death when it becomes a relief and not doing terrible things for the greater good – but killing for sadistic enjoyment, for cruel fulfilment and through sheer serial killer need. While the complete opposite of the other stories of death, they fit the full spectrum of the theme and add the missing elements to the question of “Ends justifies the means” that has been raised – after all, we may say yes in the first two stories – but is this where such an answer leads us? More, how many times do we sit in peaceful ignorance while, as He Said, Laughing and Soldier, Soldier expose, we allow these terrible decisions to be made for us, away from our gaze so it doesn’t disrupt our peaceful lives.

The remaining stories all felt out of place to me and didn’t really add much. Death is a Lady tried to latch onto the death theme but was just a brief anecdote. Jesus and Satan Go Jogging in the Desert seems to have no connection with the rest of the stories but also feels kind of pointless in and of itself. I don’t see what it really adds or the twist it brings to the Bible story; nor do I see the advantage of retelling it from Satan’s point of view.

Manslayer; Awake, Awake, Ye Northern Winds; Labyrinth and Cascade (very creepy) are all decent stories but, again, are somewhat adrift. The first three especially are high fantasy stories of a pretty standard swords and sorcery bent; they’re not bad – but there’s nothing special about them nor do I see them as fitting this book.

Cascade isn’t exactly on theme beyond the sheer creepiness and beautifully dark writing which means it feels like a part of the book even if it isn’t. The same applies (including the super creepy, beautifully dark writing) to Soulhunter and it would actually be a story I’d be interested to see continue since it has a fascinating and very different world, a very dark style and the author’s usual high standard of writing. But the author’s notes themselves admit that this book is “controversial” since it has some really unpleasant anti-choice messages.

This anthology tackles some excellent issues of homelessness, class, slavery and misogyny as well as some really big moral questions and takes a look at the treatment of the elderly as well. Some really meaty issues really presented in a soul-searching and even harshly insightful manner; it demands they be thought about. It also

What it doesn’t have are much in the way of POC (there’s one possible Latina woman) or any LGBT characters - and this is a book full of a huge number of characters as is inevitable with any anthology. Erasure is never something I accept however tight the cast – but it’s even more dubious when there are so many characters

This is a truly excellent anthology and I loved the vast majority of the books in it – not just loved but am pretty eager to read series from these worlds that have been revealed. But I also think it’s an anthology that could have used some editing and a few of the extraneous and out of place stories cut out and put elsewhere – and some decent inclusion is sorely needed.