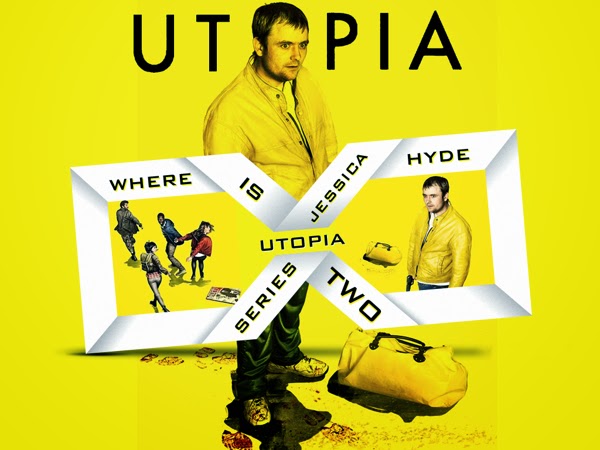 The nefarious goes to Ian’s workplace and his place of employment to fiddle with his computer. Ian’s boss arrives and Lee tries a series of lies to convince him that he has every right to meddle with the computer. It fails. Mainly because it’s absolutely impossible to pass yourself off as a member of the MET when you’re a silly muppet wearing a lemon yellow suit and a hair right out of the 50s. He resorts to slitting Ian’s boss’s throat. It’s messy and, no, “suicide” will not be a reasonable cover up for this

Cut to our favourite gang with Garth, Ian and Becky all looking traumatised in a room full of creepy dolls when Pietre arrives to tell them he made breakfast. Yes, him announcing breakfast is slightly scary because just about everything he does is slightly scary. In the kitchen there are more scary dolls and a very very healthy breakfast. Over brown rice and nuts he tells them that since their DNA would be all over the battle scene none of them can run, that Christian is the one they’re after and they have to figure out why to survive

Also, Pietre is on their side now.

So time to question Christian (yes Anton is the source of a lot of knowledge but they don’t know about him) in this house that is FULL of creepy dolls! He finally admits to meeting his old professor, Gorsky who may have been in the Network – but he was drunk so it’s fine, right? Garth checks the internet – Gorsky is now dead. Pietre insists on hearing what Gorksy said – which was “Jimmy De Chelle is a fat man.” Oh yay, a cryptic code! Which Christian did not the wise thing of googling (turned up nothing except DEATH of course). Pietre suggests no more googling. And since it’s Pietre that reasonably worded request always sounds like a blood curdling threat

Becky hallucinates, possibly from trauma, possibly illness – and lashes out unfairly at Ian which leads to Ian pointing out how desperately he missed her (while this makes her curtness seem unfair, it also makes him look more than little like a depraved stalker). Then Pietre asks “where is Jessica Hyde?” Which makes for excellent flashback fears, given that was almost his only line through much of season 1. Right before mangling people

Ian, who assumed the whole Network was other, (and he still thinks Milner is on their side) reasonably doubts why they should even trust Peitre – and even asks how sure they can be that Pietre rescued them last episode – or killed their rescuers. All reasonable points that are neatly answered when the news reports that he has been framed for the murder of his boss.

More interestingly restrained emotional scenes where Ian can’t deal with his boss being dead and hides in hostility and the reason why Chrtisian is creeping all over Becky all the time is that she slept with him once when she was extremely depressed and vulnerable, a memory that makes her “want a vagina transplant” which is a pretty unequivocal reaction. Also, Garth can steal cars better than Pietre.

Over to the badguys of the Network, and poor Geoff who thought he was so important is being firmly told how much of a tool he is – Milner won’t even meet him and Leah doesn’t care if him going forward with their plan (releasing the vaccine everywhere at the same time all over the world) destroys his political career and ambitions.

Meanwhile Jessica is doing her very best to freak out everyone, especially Milner, but standing still and staring into space for 8 hours (yes, Milner was too busy staring at CCTV of Jessica doing nothing rather than meet with Geoff). Of course it could be an excuse not to look at Leah in her eye-searing red outfit. Leah’s also laying on the ultimatum for Milner – they need to know if Phillip messed with Janus and they can’t let Milner delay them any more –they have to look at Jessica’s brain! Aside from sounding bad, the fact Milner tearfully says “she’s all that I have left of him” suggests that this isn’t going to be a fun procedure.


They take a restrained and unresponsive Jessica to their little operating theatre (even risking transporting her by van), plan which bits of the brain they’re going to take chunks of to study. She’s tied to an operating table and the two doctors don’t even see the point of having a guard in the room

1 dead. The other taken hostage and forced to piggy back her towards the exit. Before he too is disposed of. Unpleasantly.

Milner decides to find Christian, Ian, Becky and Grant it’s a good idea to team up Wilson and Lee – except Lee is still bitter about Wilson shooting him and causing partial paralysis after Lee cut his eye out. Oh and killed Wilson’s dad. They’re not friends and I think it’s either terrible writing/character development or proof of how upset Milner is that she would make this awful decision. They investigate and Lee finds some of Pietre’s signature sweets

Pietre has found someone to help. If they’re not helpful Ian is to make sure Grant is taken away because there are things he shouldn’t see. I still don’t know if Jessica or Pietre manage to be the most menacing. The person they’ve come to see is Ben, a teenager. He’s nastily stroppy with his parents (who seem to be high. Or embarrassing parents. Or both) and also part of a hacking collective

Anyway, he knows that they’re actually looking for Jimmy Dishe L, some kind of secret American weapons project. Teenaged cockiness meets Pietre’s pleasantness and becomes proper terror, as it should be. After much searching he learns that Project L was a weapon that scared people who were willing to weaponise ebola. It is based on the flu and Ian realises that the line was “is fat man” an allusion to the nuclear bomb dropped on Nagasaki. Well, that’s ominous.

Inside Anton seems to panic over an internet video of a cat in a shark costume riding a Roomba. He speaks in a foreign language before finally saying “Janus, you’re all going to die.”

Jessica has made her rather messy, unpleasant escape and works on getting clothes and a phone – and fixating on Ian with a rather silly smile on her face.

Milner tells Leah the bad news – Jessica has a escape. And the idea of getting her back is ludicrous – it took 35 years to find her the first time. Leah blames Milner and her sentimentality. Leah is ready to call it all off but Milner stops her – they can’t stop now. They don’t have a plan B, they don’t have another vaccine, another world wide flu scare or another conveniently well placed politician – all their eggs are in this basket.

In other worrying elements that may go wrong for the Network, Michael is now head of Corvadt and has an adoring assistant called Bridget who, in addition to being adoring, is also very attentative and notices irregularities; including the fact that a lot of the testing for the Russian flu vaccine is identical to vaccine tests in the past – i.e. they’re not real, they’re just copied. Michael quickly writes her a note to be quiet and careful – and arranges a clandestine meeting

Michael tries to convince Bridget to get away from the whole thing but it’s too late – she’s already testing a vaccine sample. Which is more than he ever managed. And she has a home lab – all hail her geekdom! Super geeky sexual tension time! But she also finds something, a protein, which shouldn’t be there. This causes Michael to run out after telling her to keep everything secret – he leaves and Network goons kidnap her while he watches from across the road.

Back to Wilson and Lee who have a quite ridiculous altercation in which Wilson fails to shoot Lee (alas) and Lee smacks him in the leg with a crowbar. All because, as Lee points out, Wilson could kill people, but only when he deems it necessary. Revenge and anger are not motive enough for Wilson.

Pietre splits off from the main group, carrying his ominous yellow bag, because there are “things he needs to see to.”  While he goes to get them new identities from Ben the hacker, the rest of the group expounds on the whole “fat man” comment. Basically it’s a virulent deadly fly epidemic to convince the world that they need to take the vaccine against “Russian flu” – therefore ensuring that everyone gets behind taking Janus.

They also realise Anton is making sketches – sketches which are either duplicates of, or in the same style as – the Utopia comics. Becky calls Anton Phillip Carville – and he responds. Phillip is alive… Ian suggests telling Milner but Becky is wary – because Milner said the whole drama was over and that was a blatant lie. She’s also not willing to let the man who actually made Deels disease, the disease she’s suffering from, disappear from sight. They also have a together moment – and kiss.

So Christian decides to throw a spanner in the works by revealing Becky spent a lot of season 1 trying to get the Utopia manuscript to him in exchange for Deels medication.

So Ian decides to call Milner and tell her they have Phillip. Oh, Ian. Of course this news rocks Milner to her core. But being emotional she reveals that she knows Becky is with him. He hangs up on her. But Milner tells Leah to go ahead with the plan.

Geoff goes on TV to announce his support for “V-Day” when the world is vaccinated. While Lee creeps into Ben’s house, tracking Pietre, to kill Ben’s parents. Who are already dead. As is Ben. Pietre holds a gun on Lee – he’s willing to trade the others to keep Amanda and Tess, the family he was living with, safe (who he got new identities). Lee tries another recruitment pitch, but Pietre has already vanished.

Michael goes home –and finds Jessica. With a big knife. And awful awful awful clothes. The clothes scare me.

Jessica or Pietre, I don’t know what is scarier

Ok, I can’t decide whether the amount of mistakes the Network is making is shoddy writing (they used to be much slicker) or really clever writing. I suspect the former but hope for the latter

After all, The Assistant, who ran Corvadt, was part of the Network from the beginning and was so very efficient is dead. That’s got to hit their operation efficiency. Especially with Milner so distracted and so many of their funds invested in V-day. Even the defection of Pietre – all of these must have an effect on the Network

So are their mistakes, their sloppiness creeping in round the edges, all just a twist in the writing or indicative of the strain the Network is under.