Race on The Last Ship: Tokens, Set Decoration and Cheerleaders 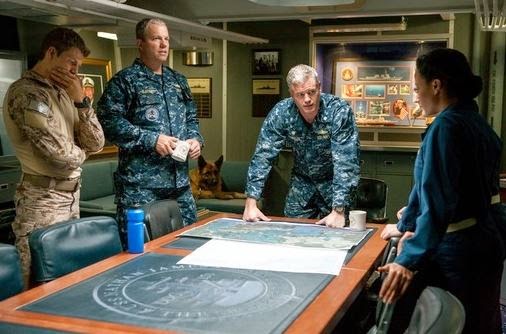 Over quite a few posts on Fangs for the Fantasy we have spoken out about a number of tropes and the treatment of marginalised characters in our preferred genres. It has, I think, helped us become more aware of the tropes that dig marginalised people and certainly revealed how much the genre is saturated with them.

But I did worry that maybe, just maybe, it could make us jaded and cynical - especially when the pilot of The Last Ship aired and I was already predicting so many fails. Clearly I need to work on being more hopeful
And now the last episode has aired and I have the rather dubious comfort of knowing that I may be jaded and cynical but I do have accurate instincts

This show embodied a great deal of the racial tropes we’ve come to know and loathe, even though it had a surprisingly diverse pilot. As predicted, that surprising number of POC characters  in the pilot was just setting us up for Minority Decay. This was not actually done by making the POC disappear or killing them off - in fact, rather ridiculously most of the crew of the Nathan James actually live now matter how perilous their situation is (but I have to point out, of the crew who have died - Frankie, Cosetti, Maya, 2 of them are POC). No, this decay is caused by the POC slinking into the background and becoming extras - little more than set decoration.

I mean that almost literally - when we have conferences where more than 3 characters gather to discuss whatever issue the episode has thrown up, around the table will be one or two POC - some we know, some we vaguely recognise. They’re there, they don’t talk (or if they do they have a single line) while the white people (usually Tom, Mike and Danny, occasionally Rachel() speak and decide what to do. They’re set decoration with little actual role to play in the episode and little input to add.

None of the POC have a major role to play on this show. We have several characters who are just names - like Burk and Cruz, who I only know are actually supposed to be characters rather than nameless extras because their uniforms have names on them. We have Dr. Rios, the ships doctor, who does virtually nothing: CDC investigator Rachel actually provides more meaningful medical care for the crew than he does - he’s on the periphery at best. Bernie (known through most of the show as “Bacon”) plays chess with Quincy (and, because he listened to Quincy’s manipulations, ended up as a pawn in a plan against Tom). Alisha is supposed to be a woman of some rank, but all she ever seems to do is repeat what the captain says to other people or take what they say and tell the captain. Jeter - Master Chief - is definitely supposed to be a man of some importance on the ship but he does nothing but wave pom-poms for Tom. Even Bertise is little more than a repository for the special blood she has in her veins, she’s a tool and a resource. The only POC who actually had a storyline they were deeply involved in was Chung, the Engineer, who had one episode in which to shine before his boss was back in action.

Contrast that with the major characters in this show: Tom, Rachel, Mike, Danny, Tex even Quincy and (at a great stretch) Kara. They’re all white, all straight and nearly all male. They all have personal stories and plot arcs that extend over the series (and relationship drama the show could have done without) and/or are deeply involved in many episodes in a meaningful way - not just as background observers or random people who follow orders and look tense while Tom is a Big Damn Hero. They’re involved in the plot, they’re part of the plot, they’re important to the plot, they have personal stories and issues that are revisited several times. They’re characters, they’re not background decoration. They’re important, they’re integral to the show - they’re not tokens with no real impact on the show and no real role to play other than to show some non-white faces to the cameras.

The white characters are not only dominating the show, but embodying the pervasive trope of white male leadership and hyper-masculinity in dystopians. Tom is the commander of the ship, he is the leader and he is virtually worshipped by his crew. In the case of the Master-Chief, I don’t think it is “virtually”, I think he outright worship’s Tom. Nearly every word out of his mouth is to praise Tom’s awesomeness, in the pilot he was there lavishing praise on the man for holding in a fuse and it continued from there. At one point he describes Tom as being on an actual holy mission. Praising Tom is quite literally the sole point for his existence. I don’t know much about the American military, but it seems “Master Chief” means “cheerleader” or possibly “cultist”.

Tex tells Tom how utterly essential he is while they both await rescue. And Alisha clues into her mother’s nefarious actions because she has the temerity to question whether Tom would follow civilian authority (Alisha seems shocked at the very idea that Tom would follow anyone else’s orders). Praise - outright adulation for Tom is a regular part of this show.

But it’s not enough for Tom to be the commander of the ship and lead from the Bridge as would be sensible. No, Tom needs to lead nearly every mission personally, despite the risk (in fact, the Nathan James used a lot of fuel and time and went to considerable risk when facing the Russians because Tom insisted he lead the mission himself). Whether it’s rescuing Bertrise from a yacht, delaying escape from the Russians, personally going into the jungle to get monkies for Rachel or leading raids for supplies Tom is nearly always at the front of the action. The Big Damn Hero leader can’t stand at the back and dispatch minions (though Danny is there as a secondary Big Damn Hero when necessary) he has to personally go out there and be the hero every time. It’s also notable that sometimes he will deign to share his heroic accolades with Danny (who further cements his position as Big Damn Male Hero with his protectiveness of Kara despite her being a soldier as much as he is), or occasionally Mike - but never with a POC. This was especially glaring when fighting El Toro when Master Chief was left behind (and the only one voicing objections to the heroic rescue) so the Big Damn White Heroes could go save the day.

Which also brings us neatly to the not-even-remotely subtle villains of this show. Two single-episode villains we’ve faced have been a Latino drug baron/warlord in Central America and the other was a collection of Al Qaeda terrorists who want to kill people because TERRORIST that’s why. Both were just blatant stereotypes, caricatures with added jingoism thrown in. That jingoism was also apparent in Ruskov, but even if he were cartoonishly evil he was presented as an ongoing threat, a competent menace that lasted for several episodes. Not a throw away villain in a random one-off for Tom to prove his Big Damn Heroness again.

Of course, by the look of things that is going to change in season 2 - because the last episode introduced a new enemy, Amy Granderson, a Black woman. And she’s not just content with being a wannabe warlord of her own - no, she’s practicing genocidal eugenics, deciding who lives or dies, who is worth saving and killing those who don’t fit her criteria. Needless to say, eugenics has been used over the years to justify the persecution and genocide of minorities at the hands of prejudiced straight, white abled bodied men. It does not bode well that next season will improve when the apparents enemy is going to be a genocidal, eugenics minded Black woman

The Last Ship is another example of how simply showing POC faces to the cameras isn’t sufficient to make a show diverse or inclusive. Having heroic white characters drive the plot while POC serve as servants, enemies, cheer-leaders and background set decoration is blatant tokenism - and having numerous tokens doesn’t change that or make it better.