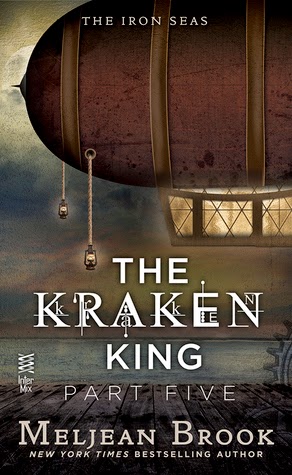 Zenobia has been kidnapped to try and force Ariq’s hand and make him reveal the location of a devastatingly powerful weapon to the Horde rebellion – as an added threat, general Tatsukawa threatens to unleash the might of the Nipponese empire against his settlement.
Zenobia doesn’t expect rescue. Ariq is a ruler, he has people he is responsible for. And she’s no stranger to being used as a bargaining chip. While it hurts, the sensible thing is for Ariq to comply and leave her, or look after his people – and leave her
But Ariq does not respond well to threats
This book managed to play with a lot of romance tropes that could be very headache-worthy to read (because I’ve read so many) but manage to do it in a way that makes them really work. This seems to be a pattern with the whole Kraken King Saga and I have to say I love it
Take Zenobia’s pain and angst that Ariq won’t rescue her. She’s sad about that, it hurts her that she isn’t his top priority. But at the same time she understands it. She doesn’t think he won’t rescue her because she’s unworthy or not important to him or otherwise flawed and unloved. She doesn’t think he will rescue her because, as a leader of his people, it would be impractical and even selfish for him to do so. She knows how kidnapping works – you are held, unharmed, for ransom.  There’s no reason for Ariq to make her a priority. It’s painful, but it’s based on solid logic.
Similarly, her own attempts to escape are not based just on how much she needs to see Ariq and how sad she is without him, but because she’s tired. She’s tired of always being the victim, of living her life in fear of being a target for her brother or – now – her lover. She has motivations and thoughts and pain and trouble which are not based on Ariq and are deeply personal and, in many ways, separate from him. Zenobia has always been her own characters – as has Ariq – which has always made their romance more compelling because they both have so much in their lives above and beyond each other. Their romance is an important part of the lives of two fully rounded and involved characters – but it isn’t their sole reason for being; these characters were created for more than just being a vehicle with which to display the romance
Zenobia isn’t good at escaping – it isn’t her skill set – but nor does she meekly wait for rescue and nor is she incompetent. Her plan is flawed, but reasonable. This book brings her to one of her lowest ebbs, but, again, her pain is very personal and a very reasonable part of her character – and completely separate from Ariq. She aches because of an attack to her family and her work and it cuts her deeply. I like that she’s not invulnerable but also that her vulnerability is not her love interest.
She also recognises when she isn’t being sensible – but also has a reason not to be sensible, deeply personal, emotional reasons that work; her not being sensible is even her own overt recognition that she isn’t a robot and something has to give.

I also like that this same subtle, fully characterised lens has been placed on the bad guys as well. The antagonists have reasonable goals in mind, they have solid, understandable motives even sympathetic motives. Even through Ariq’s eyes, who has every reason to loathe Tatsukawa, also understands why he is doing what he is doing and can even feel some sympathy for the man (even while wishing he could kill him). The horrors of the Horde, occupation and slavery which go with it aren’t forgotten and is a common enemy to all of them – which adds a wonderful blast of complexity to the mix.
As ever with this series we have a lot of racial diversity. In fact, I think Zenobia is the only White person in the book. This is a book focusing mainly on the Horde rebels (from  Asia and North Africa) and the Nipponese empire. This whole section of the Iron Seas series is very free from any kind of European or American centrism which is very refreshing to see – and the world it has created, with the Horde empire, has removed Western-European/North American dominance  from its history which has created a wonderfully new paradigm
Alas, there are still no LGBT characters.
I think the humour that has been present in other episodes of this story is missing, but since this is Zenobia in something of a nadir, I can understand that. I don’t think the wonderful, amazing snarky humour of the other books would have been entirely appropriate here. Though I miss it.
This whole series is one I love – I keep waiting for it to crash or fall into a pit of unpleasant tropes – but it continually manages to avoid it. My only complaint is the format – splitting the Kraken King up into so many parts, though I think you can buy the books together now – which I would advise.