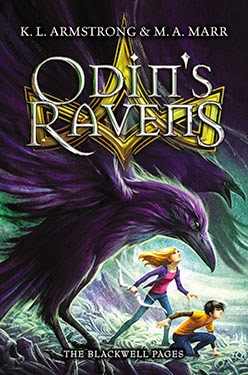 Baldwin is dead, avatar of the god Baldr in legend he stayed dead because Loki would not cry for him – but this time Loki’s descendants grieved for his loss. With the myth changed, Laurie, Fenn and Matt are willing to enter the underworld and bring Baldr home – even if it means facing the dead, giant dogs and the goddess of Hel.
Even then they’ve still got Mjolnir, the hammer of Thor to find and an apocalypse to stop… and Matt, a 13 year old boy, has to grow into the shoes of Thor.
Plot wise I think this book has a similar issue with the last book – it’s very linear. They have a step-by-step plan and are railroaded along it. They have to rescue Baldwin, they have to find Mjolnir and to do both they’re basically told how to do both. We then have all the necessary action scenes described (and they’re really good, don’t get me wrong) and they all flow very smoothly, there’s little in the way of down time or dead places in the book – but it’s still linear. They have a task, they know exactly where to go, they go there, they fight whatever gribbly thing they have to fight then either they succeed and fail and move on to the next step. There’s no real complexity there. And it isn’t written badly and it certainly doesn’t flow better and it’s generally fun to read – but it’s a classic quest story. A well written quest story, a nicely paced quest story with some great description – but still a linear quest story.
The research behind the book is excellent with a real nice inclusion of all kinds of Norse legends and not just the common ones (Thor, lord of goats doesn’t make its way into many stories). I do so love the legends
One thing that does set this book above the first book is the character development – there’s a lot more of it. It also had some nicely fun moments in between the action
I am torn over Fenn. On the one side he’s a pretty annoying character – he’s surly and moody and his cousin Laurie spends waaaaay too much time tip-toeing around his stompyness. I honestly spent most of the book a little tense waiting for him to do something unforgivably outrageous, turn to the dark side, or otherwise make me want to strangle him. In the end he was still a character I didn’t like – but he wasn’t unrealistic, excessive or aggravating – or any more aggravating that a bad tempered 13 year old with a chip on his shoulder should be. I think there’s a level of realism to him, he’s had a hard pretty neglected life, he’s always been second or overlooked and accused (which we also see from the general Thorsen way of treating him and the other Brekke’s) and the only person he has ever had he could rely on is Laurie – who now has other friends and is supporting them and not just following in his wake. His behaviour is understandable – annoying but understandable and realistic.


Laurie has stepped forward a lot in this book – both her changing role as champion and her getting a weapon and finally taking her place in combat rather than being the portal bus for the rest of the group. She is a more active participant, she still has to constantly navigate around Fenn’s ridiculously stifling “protectiveness” which I had hoped would have been dealt with in the last book, but she’s more involved than being the transport. I also like more of her Loki-ness coming through in cleverness – when she meets Helen (goddess of Hel) she is quick to call her “auntie Helen” and play into the relationship while Fen is more reluctant. She sees a potential advantage and she works it – to Helen’s amusement. Laurie is beginning to show signs of craftiness.
Owen also made more appearances in this book and he had some nice elements of character development – including the way his gift of all seeing forces him to be vague and not to intervene. He wasn’t around a lot but he had a lot of conflict in that time and managed to come across as a major power without stealing Matt’s thunder.


Of all, I think Matt actually had the least development because he was pretty much already in the right mindset after the last book. Still there was some excellent maturing of him – (including an awesome scene with Rayna, basically telling him to stop being so damn wet and get his Thor together) – as he turned more and more from a rather lost and apologetic boy into Thor, a war leader. He came into his own this book.
We have no minorities in this book. Everyone is straight, cis and white and largely able bodied (Owen has one eye which is a recent development). There’s zero attempt at diversity here. There are some nods towards how the Brekke’s are treated but the class elements of it are pretty much ignored or irrelevant, it’s more a comment on the Thorsen’s power and the contempt for Brekke criminality than anything else. At least Laurie’s development and the addition of Helen and the return of Reyna makes for some better depiction of women.
I would say this book is a step up from the last one because there’s some more meat on the bare bones of the story. The character development, the further exploration into Norse myths and the greater involvement of the characters all worked to make it less sparse than the first book. I also think it was an excellent idea to spend some of the book paring back to Matt, Laurie and Fenn for a time to help us establish them more before throwing the huge number of characters at them as happened at the end of the last book. It’s a step up but it has some way to go yet.