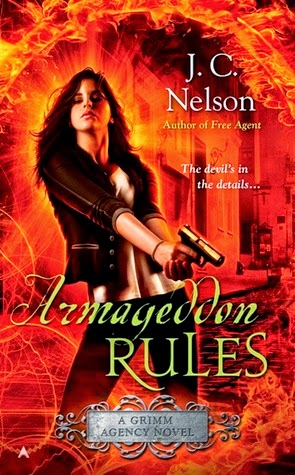 Marissa has a new wonderful life. She’s Grimm’s partner, fully involved in running the agency with all its wonders and petty annoyances. Her best friend Arianna has put her princess past behind her and is settling in as an agent. And her boyfriend Liam is still with her and it’s wonderful –barring some singeing from the half-dragon

But she made enemies – and those enemies have a lot of resources and a lot of patience. When they come for her Marissa finds herself alone, her friends endangered, absent or depowered and her juggling saving them and keeping the agency going

Also, she kind of started the apocalypse…

This book is exponentially more silly than the first one. And it works

It works in a way it wouldn’t with the first book because Marissa is now Grimm’s partner, not his indentured servant. By putting her in charge, by making her an equal, the book has more scope to be fun and silly than dark and gritty and angsty. There were certainly elements of the silly in the first book, but the darker undertones pulled us away from it and stopped it going too far

The darkness has been dispersed, Marissa has moved on from her previous wishes, her laments of the life she is forced into and her general moping. She now has a career she’s embraced, power and agency, a man she loves and some very good friends. She even has a new intern to shoot. She’s happy. She’s in a good place and it really changes the entire tone of the series

So we have gnomish monster-truck death cults! We have infernal energy manifesting as plagues of murderous poodles! We have princesses blessed with so many positive attributes so there has to be balance – and they cannot drive. We have a love sick wraith of pure hatred dancing attendance on Arianna. We have a prince and true love’s kiss bearer with a phobia of physical contact. We have a zany apocalypse complete with plagues of encyclopaedia salesmen, we have the need to kill golden-egg-laying geese before they destroy the market and a weekly gig of turning frogs back into princes (finding which are which because princes are far lazier and more entitled than frogs) and dwarves digging up balrogs (“nothing says ‘you shall not pass’ like a howitzer.”)

We have Marissa being awesome and competent and long suffering and holding everything together as the new co-head of the agency. Liam, her new dragon boyfriend, has been shipped out of the book for most of it which is good – because we can focus on Marissa and Arianna. Arianna may be my favourite character - she has grown leaps and bounds, she’s a powerful magical princess, has a great big gun and really really hates the fact she’s a princess despite the magical bonuses she gets. While both she and Marissa are contemptuous of normal princess behaviour (“flail helplessly and wait for a man”) it’s also wonderfully clear that Queens and princesses are the real powers in this world. Marissa’s contempt for princesses isn’t carried over into reality and we see Marissa’s envy shining through.

If it can be said to be anyone’s book than Marissa’s, it’s Arianna’s as well

Now the problem. This book suffers from a lack of focus and a huge twist in the storyline half way through which I felt was jarring and resulted in neither storyline being developed as much as it could be

For the first half of the book the focus is on Queen Mihail and her desire for vengeance on Marissa and all her friends and contacts after the events of book one. This is a fun, dramatic storyline because Marissa did promise vengeance, is an extremely powerful being and has the resources to make it stick. We see Marissa reeling from multiple attacks but also having to handle more and more things on her own as her support network grumbles. It was an excellent chance for Marissa to shine without Grimm’s power and knowledge and even without Arianna’s magic or Liam’s new dragon nature. It allowed Marissa to remind us of her competence (even if there are meta-plot hints of her being manipulated) and her capabilities despite being the only non-magical human in the cast. She’s still powerful, she still leads the story, she’s still pretty awesome and this bit of the book shows her off and the world to an excellent degree

Then half way through Marissa accidentally becomes the harbinger of the apocalypse (which could be a fun little mistake to make, but the whole rules around it and how she is duped are implausible to say the least – yes I know it’s a book all about the implausible but this pushes it further than I can run with). Now we have another major storyline and it all kind of mooshes together clumsily. Despite putting all this effort into squishing Marissa, Queen Mihail seems to take a break while Marissa runs around trying to save her friends from their various predicaments. The brewing apocalypse requires nothing more than a few, brief, delaying moves from Marissa which are definitely funny (she has to provide mounts for the 4 horsemen. But her contract doesn’t specify what constitutes a mount) but it generally feels like Marissa is just putting off the apocalypse. An apocalypse, I feel, generally demands more of one’s attention.

On top of that we throw in Ari’s relationship issues and lots of meta-angst with the secrets Grimm is keeping from Marissa and the future looming of the Black Queen. Together I think it ruins a lot of potential in the book – because we have so much going on and so much of it conveniently puts itself on hold while Marissa deals with one of the other storylines or some of the random mundane elements

I’m also not 100% behind the depiction of the new piper. Most of her is fun and the mockery of her infected and silly piercings would work – except Marissa doesn’t quite make it clear that she’s mocking her for her unwise choices of unmaintained piercings (hence the infection) and not for being pierced at all. There’s also the plague of blood – causing every woman in the city to start their periods which contains all kinds of problematic elements (though the suggestion of agony and pain is more related to cramping than bad tempers) Similarly when the obese Famine shows up, Marissa is outraged that Famine is using this form to, in her eyes, mock the starving but doesn’t quite draw the line between that and being outraged that he’s fat. Also, War – when war appears as an old White guy she considers it appropriate given the most destructive and widescale walls in the world have been started by old white men, but it doesn’t change that War’s most common form is a Black or Latino man.

Death is the other POC horseman, he’s Asian and probably the best of them – he’s less of a caricature and much deeper in his role than just “I’m Pestilence, I cause plague”. He’s infinitely patient, because he’s inevitable.

The other POC in the story are Rosa, who is around a lot but really she’s just a ball of bad attitude with a shotgun (and occasionally a rake). Which is fun, but not a character. And Shigeru the Japanese assassin who very briefly appears. It’s relatively decent number of characters but very low in actual content or involvement.

In the end, the plot doesn’t quite hold up – just a little confused and conflicted and lost. It’s mainly an issue of not living up to its potential or developing its ideas more than anything but it does fall short. But I’m honestly inclined to let that go because the book was so much fun – it’s an excellent book for a grumpy day and it’s a hard book to finish without smiling. I got this book and the previous one on a whim and I think I got lucky and I look forward to the next book in the series