Refugees (the Remaining #3) by D.J. Molles 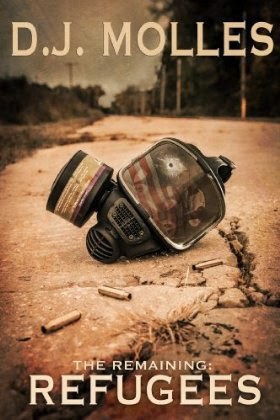 Lee is beginning to organise the camps of survivors into a network – one that is growing. The foundation of society is beginning to be put in place; winter is coming but they are read

Then there’s what his fellow soldiers are up to…

The world building of this series is huge. I really like how here’s a real attempt to look at some explanation behind the zombies (or infected in this case). We have scientists explaining what causes the infection, scientific reasons for why they behave the way they do and a real attempt to study and explain the biology of the infected. It doesn’t just say “zombies” and rely on pop culture to fill the gaps – or just let the word “zombie” cover everything

This makes the world setting much more real and believable. It also means that we have a lot more scope for plot lines – because the realness of the infected, the fully fleshed out nature of the infected means they can do far more than just be background noise. In most books and on most shows with zombies, eventually the zombies become something similar to a natural disaster – some big background thing that everyone works round while the storyline focuses on how people deal with it and how they interact with each other while dealing with it. They become character driven stories in the background of a zombie apocalypse because after a few stories of surviving zombies there’s not much else to say

I’m slightly frustrated that more isn’t made of these unique zombies and the greyness that comes from killing them. Unlike other zombie books where the zombies are blatantly corpses and there’s absolutely no way they could be brought back to who they are, these zombies are still very human. Physically, recovery still seems possible. More they are reasoning, they are forming groups, they are protecting each other, they are providing for each other and helping their weakest – and more (which I won’t reveal for fear of spoilers).

Basically, they’re not mindless monsters – they show at least a level of intelligence on par with more intelligent animals, they’re not undead, they are infected. There’s every reason to think they can come back, they can be cured. Rather than viewing the obvious humanity of the infected as a threat, it would have been nice to see some of this explored.

Especially considering the utterly clumsy way the professor and his students where handled – here we have people who are supposed to see the humanity of the infected, but instead it’s handled in an almost laughable manner with them working to bring about a coup to stop military control (the “military” being 2 people…) of their little enclave. This isn’t close to an actual attempt to portray compassion so much as it trying to parody war protestors – it’s like some pro-gun, pro-war attempt at satire by creating straw pacifists that would be the most ridiculous ones I’ve ever seen if I hadn’t read the Sword of Truth series (which tends to beat all other series when it comes to ridiculous, thinly-veiled straw-men).

It all adds up the whole presentation of Lee. He’s just… so perfect. In fact I want to put the label Gary Stu on him pretty badly. He’s right, he’s always right and people who disagree with him don’t just have different opinions or are presenting different ideas or have equally sound ways of dealing with things – they’re just wrong. Completely and utterly wrong. And now that the other agents going a little off the rails, this also applies to them as well

Which adds to my annoyance – because they have a point here. From a civics point of view, they as soldiers should be under command of the last legitimate civil authority is very reasonable (and a writer interested in more nuance could even tie it in to his straw-academic-protestors) and Lee deciding “screw that” is dubious and needs more analysis. Further, the commands he sees as so appalling make a lot of tactical sense. But there’s no even consideration of the idea and saying “no, we can’t do that because X, Y, Z” – it’s just dismissed as outrageous and wrong. But it makes sense – it’s cold and involves sacrifice and abandoning people, but the plan is sensible.

Because every idea presented by everyone else is instantly dismissed as wrong and because everyone who is in opposition to Lee is an almost caricature of awfulness (the new head of his fellow soldiers, the straw-man-academic, and        ) this, in turn, justifies Lee shouting down any opposition and seething in barely restrained violent rage to anyone who doesn’t hail him as their great saviour and unquestionable leader. It generally makes for a terrible dynamic. All we need is the occasional person actually disagreeing with Lee, being listened to without being shouted down and them not being the worst thing ever.

Interestingly I do actually like the concept of Jerry. He’s an unquestioned villain but, because he’s not a straw man for government control or ivory tower pacifist academics (really, authors, Terry Goodkind did it and it was a glorious mess, don’t emulate this) he actually has some level of development to make his villainy characterful. It is a fascinating take that there are people who have not just survived but thrived after the zombie apocalypse, people who become powerful and influential in small-scale autonomous groups and even people who welcome the loss of all the trappings of civilisation. He has done well out of it and doesn’t want it all turning round, society rebuilding and him, again, being reduced to one cog in the giant machine. He’s a big fish in a small pond and doesn’t want to go back to the ocean. There’s a motivated villain, there’s an antagonist with a motive – albeit and evil one – that actually makes sense.

We have several POC, but I don’t think of any of them as memorable particularly or in the top 5 main characters. They’re there and they’re described and a Latino man plays an integral role (not a good one though) and the most memorable other role is of a Black man tragically dying.

While there are a number of women in the background, there are 3 with any real presence; 1 is the cook. She cooks. Here endeth her role. One is more complex, Angela has been with Lee since the beginning and she and he have an interesting relationship, they have moved into an almost couple dynamic with the communal living in the camp without ever becoming a couple which is interestingly complex. And there’s Julia – she is interesting and has a much greater role as both a key player of Lee’s team and the team’s medic. But she’s also far more emotional than the men on Lee’s team (something Lee rakes her over the coals for, how she expresses her grief and pain). It’s also notable that the two involved women in the books are both heading towards or in a quasi relationship with Lee

There are still not LGBT characters –clearly being LGBT made you especially vulnerable to infection.

I said in the last book that Lee was a hero and the book lacked nuance but it was fun for all that. Unfortunately we’re taken a step up and “hero” is becoming “unassailable Gary Stu” which worries me – I think we’re one, maybe two books away from full on Deacon Chalk territory. Step away from the edge, Gary Lee.