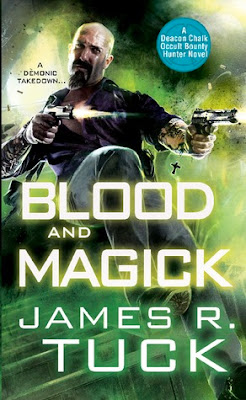 Deacon Chalk can’t even enjoy a quiet dinner out with his friends and loved ones without witches swooping in and ruining the meal.

Witches are a pretty new one to face, especially witches as powerful of these, transforming demon witches, witches that raise the dead and witches that can kill with a word. And they have one target in mind – the Trinity, Sophia’s baby triplets. If they get them, they may have power enough to end the world.

And Deacon Chalk faces conflict in his own inner circle as people close to him try to find their own solutions.

There are elements this book that continue the improvement of the writing style we saw in the second book. It’s cleaner, the descriptions less inclined to be too overwrought and there’s less of the utter melodrama – the writing style is definitely improving.

We’re also having a sense of meta-plot. Not just repeating characters and growing power on Deacon Chalk’s part, but the new connection with the government, Sophia’s 3 mystical children are definitely going to lead to more in the future.

We have a lot of the women growing as well, Sophia is ferocious in defence of her children – yes, an old trope. But we also have Tiff growing into her own, becoming a capable and dangerous hunter in her own right and seeking her own place and own career in monster hunting in her own right. While, naturally, very much under Deacon Chalk’s shadow still – and certainly never in a position to challenge him (because no-one is ever allowed to do that ever – Kat tried in this book and is suitably punished for daring to question Deacon Chalk).

We continue to have a diverse range of antagonists and powers suggesting the world is extremely broad which is always something I favour. The story itself isn’t complicated or difficult – being a rather linear “protect the prize, kill the enemies” with no great mystery or twists. The enemies are known pretty much from the beginning, what is needed to be cone is known from the beginning. What they’re after is pretty much known from the beginning. It’s another action-film type book, it’s there for fighting and action and adventure and taking hits and keeping moving and overcoming all the odds.

All pretty good so far. And it was a book I couldn’t put down until I’d lost rather a lot of sleep – but not because I was enjoying it, but because I was angry at it – too angry to put it down in case it somehow managed to either redeem itself or damn itself thoroughly. And it damned itself.

What broke me? Deacon Chalk is an arsehole. He’s a self-righteous, judgmental arsehole. He’s right, everyone else is wrong. It’s been growing through the books but this one was the straw that snapped the camel in two.

When people argue with him he intimidates them. He beats his fists against tables, walls, cars. Even with people he’s supposed to love – Tiff presumes to argue with him and he’s slamming his huge fist into car roofs and walls and whatever. He threatens them – in the last book he’s threatened Charlotte, he threatens Larson, he’s threatened nearly everyone around him. He’s a huge man, we’re constantly told this, a leather clad massive man, a thug as he calls himself. He’s huge, he’s intimidating, he’s strong, he’s dangerous – and he uses that to force people to obey him. He’s a bully. He’s a violent, angry bully. Are we supposed to be impressed by what a big, hard man he is that he loses his temper and has tantrums unless everyone does everything his way without question?

The one shred where him insisting everything go his way would make a fragment of sense if he actually had ANY kind of plans or even relevant experience of, well, any of the encounters we’ve seen in the book. But he doesn’t – his plan is constantly “show up and kill stuff”. That’s the fullest extent of his planning – he hopes he’ll think of something and, ta-da, by authorial fiat he comes up with something on the spur of the moment, usually after he’s had some dramatic “ugh, my rib has been cracked for the 11 thousandth time, oh it hurts but I’m so manly I’m going to keep going!” moment. They even make a joke of the fact he never ever has a plan – but everyone has to obey him and follow orders?

The only reason this character isn’t a shining beacon if arseholery is because author will makes him right all the time. He is the ultimate Gary Stu, he is never wrong, he is never mistaken, his lack of plans never go wrong because he always comes up with just the right solution on the fly

And then there’s the glorious exceptions. Magic is evil – but Deacon Chalk’s ever expanding Angel powers? Don’t count. The three impossible kids with their special, unknown powers? Don’t count. Deacon Chalk controlling a vampire in exactly the same way as a necromancer (evil) did not a few paragraphs before? Doesn’t count. It’s Deacon Chalk! What he says is evil is evil and what he says is good is good. There’s no reason behind this no further depth not even proof of knowledge or research. Deacon Chalk is right. You agree with him or you are wrong and probably evil and need threatening or killing.

And I love that when he has one MILLISECOND of questioning his self-righteous, bullying, “my way or the high way” beliefs and he has both Father Mulcahy and Tiff there warning him against the dangers of questioning and self-doubt and even a holy weapon that works better so long as you don’t question and are certain in how right you are. I could almost take that as some kind of commentary on religious dogmatism, but it’s clearly serious in the book.

Deacon Chalk is an arsehole and he’s not presented as one, we’re not expected to think he’s one. We’re expected to cheer for him, to like him, perhaps even to want to be him.

Which brings us to the next issue – not only is Deacon Chalk right, right and always right in his own right, but he’s also Catholic and that same arrogant, self-righteous, definitely right everyone else is wrong attitude continues. A weregorilla loses his faith after the love of his life is killed and he starts drinking (which is described as “alcohol steals his soul”. If someone loses their soul because they’re grieving that hard then I wouldn’t want anything to do with a god that cruel) – and gets possessed by a demon – and in the aftermath is being taken to Mass; grief counselling? Maybe even discussing why he lost his faith? Nah, he lost his faith – that was Wrong in the Book of Chalk so now he goes to Mass and is Right again. All power from god (the One god) is good – but anyone else? It’s a demon. All other deities and their powers are demons tricking you – satanic even.

This also ruins one of the few positive elements of inclusion in the book – Boothe and his partner are gay men. Now they’re problematic in some ways – there’s that classic heterosexist need to make one partner big, strong and alpha and the other much much smaller and more delicate and younger (repeated over and over), but they weren’t bad. And nobody gave them grief except the demon possessing someone. Which I like – except when they realise they kissed in front of the priest and stop worried about his reaction. Now I love that he doesn’t have a problem, what I don’t like is the complete dismissal of the idea that he would have or could possibly have. I don’t like the complete handwaving of the possibility of Catholic homophobia or that the Catholic church has any issues with homophobia – they turned what could have been a glorious accepting moment into a whitewashing of bigotry.

Inclusionwise we have the gay couple mentioned above and some passing POC bit parts, without Charlotte being in this book they were largely relegated to villain roles. We also had a fat vampire – and everything he did was covered in commentary on how very very fat he was. Larson, the disabled character, uses magic to heal himself in this book – which is an annoying and gross trope in and of itself. But from the beginning, Chalk threatens and attacks him for daring to use magic and, in the end, uses his magic to rip away Larson’s cure, leaving him collapsed and crawling on the ground.

There still is an awesome world in this book and the core of a good story – and a lot of potential for more. The hooks of the three children (not so much Deacon Chalk since we’re getting a typical not very interesting power creep there) and the already huge world are fascinating and could go far. The writing issues of the first book are much more downplayed as well as are some of the other problems. But Deacon Chalk has evolved into something intolerable. The only thing stopping him from being an intolerant, bigoted bully is the author insisting he’s right about everything. Without that clumsy writing, he would be one of the worst people you could hope to meet and I simply cannot abide him.