In the Flesh Season 1 Episode 3 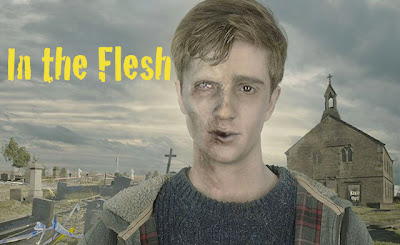 Steve and Sue Walker are up late worrying about where Kieren is and what they should do. Calling for help could have him locked back in the centre – but what if he is hurt?
Kieren walks home  in the early morning twilight, while Rick and the HVF drive past him, the captured zombies in the back. When they arrive home, Bill is in a foul mood, snapping and snarling at Rick. He’s furious with Rick for siding with the “Rotter” and ignoring him. He tells Rick the Walker lad – Kieren – has to go and Rick has to do it.
Phil wakes up – next to Manic Pixie Dream Zombie, half dressed with definite morning after overtones. He panics at the idea of people knowing he slept with Amy the hell he’d have to pay – and Amy turns it round, saying she doesn’t want anyone to know she slept with someone like him. he tells her to keep her mouth shut, he’d but strung up if people knew he slept with a “Rotter”
It’s another strong parallel, many marginalised people are considered good enough to sleep with, but the privileged people – or closeted people – can still maintain the contempt and fear of their sex partners and not only want to keep it hidden but express their derision in doing so.
On the way out, Phil runs into his mother, Shirley, and both make up lies for why they’re there.
The two extra-hunters, Gary and Dean (whose name I keep forgetting and I hereby dub Tweedle Dee and Tweedle Dum) go to the cage they have for zombies (an old basketball court) and Dum gets locked inside for “quarantine” after he was bitten last week. But probably more to do with Dean saying he fancied Gary’s wife.
As Kieren walks home, he reaches the super market – it looks like the same supermarket we see in his flashbacks to when he ate his last victim. He goes inside, his concealer is fading and one of his contacts is missing. Everyone stares at him as he remembers Lisa’s last moments. Only this time we see more, not only do we see Lisa die but the girl she was talking to on the Walkie Talkie arrives, killing zombies – it’s Jem and she finds Kieren bent over Lisa’s corpse, eating her brains. Back in the present, Kieren retreats out of the shop and goes home where his parents have fallen asleep on the sofa waiting for him.
He goes upstairs into Jem’s bedroom where she’s still asleep, having a nightmare. She awakes in shock with him in the room (his lack of concealer and missing contact probebaly doesn’t help) and points a gun at him. He tells her eh gets flashbacks of his memory returning and says she was there when Lisa was killed. She corrects him – Lisa wasn’t killed, Kieren killed her – Kieren changes what he said to “I killed her.” She waits for him to make excuses but he doesn’t – he killed her and he feels awful and guilty for it. He says he would have done anything to stop it – and Jem asks if he thinks she’s a coward since she could have stopped it. Jem has her own guilt – she told everyone, including Lisa’s parents, that she ran out of bullets. But she couldn’t shoot her own brother. Kieren says he’s going to Lisa’s parents to try and bring them some peace – and Jem asks him to wait for her
And this scene with its excellent acting hereby takes the prize for most plucked heartstrings, ever.
At the Masey household, Bill is coaching Rick on how to kill Kieren – making it look like Kieren was the attacker. He continues to talk about the PDS as if Rick isn’t one of them. He wants Rick to kill him, today and calls Kieren an animal, a monster, while Janet (Bill’s wife, Rick’s mother) overhears everything getting more worried. And then he runs out of ciggies and Rick volunteers to go get some – secretly collecting change off his mother on the way out. Money for the phone box.
he calls the Walker household – but Sue’s arguing with Kieren and Jem about going out and the phone handset isn’t on the charger and Steve’s busy playing “it’s not me! I always put it back!” game to actually look for it – so it rings off without anyone picking it up (oh that is such a perfect family scene). And in a moment of subtle, but perfect writing – Jem gets a biscuit from the cupboard – she gets 2 and gives Kieren one. It’s so casual and natural, like the kind of thing a brother and sister would always do, but it says more for Kieren being accepted by her than any amount of speeches could.

Despite that, this series is powerful, it has some immensely well crafted messages, even with their dubious foundations, and the acting, writing and emotion involved is strong enough and well done enough that it’s sometimes painful and difficult to watch – certainly impossible to watch without being moved. Scenes today – like Lisa’s parents and Sue’s speech in the tea club were heart rending.

And if you really do have to present marginalised issues through the lens of fictional creatures - THIS is the way to do it. This is as perfect as it can be. This is as emotive, as real and as evocative as it can be. this is as tragic as it can be, this carries as much of the immense impact you possibly can. This came as close as it possibly could to Getting It Right.
It’s a beautifully well written, well acted and incredible show. It’s powerful, moving if not exactly fun or comfortable watching. It'll bowl you over and knock you down.