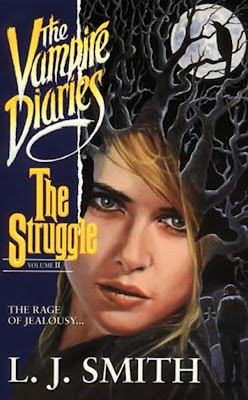 Stefan is missing and Elena thinks Damon is responsible – for both the missing Damon and the bodies that are starting to pile up messily around town, making the place untidy. Unfortunately, much of the rest of the town is focused on Stefan as the culprit and he has too many secrets to be put under such close scrutiny

And Elena’s own rising star is dimming with her association with a suspected murderer. Once Queen of the school, Elena is rapidly becoming a pariah and even her own family are doubtful of her ongoing relationship and wish she would end it. This newfound unpopularity just hands mean girl Caroline more ammunition with which to attack Elena.

Behind it all, there’s Damon – who is disturbingly interested in Elena and keeps appearing at random moments with a declared goal of having her – even if he has to hurt her loved ones to achieve it.

In the last book I found Elena annoying. In fact, I found her intolerable to an unbelievable degree. She was incredibly selfish, utterly self-absorbed and the way she treated the people around her was beyond contempt. I wanted very much to give Bonnie and Meredith large wet fish and encourage them to take it in turns slapping Elena around the face with them.

In this book it’s not quite as much. Now, don’t get me wrong, it’s still bad. Elena is self-absorbed, incredibly selfish, treats her friends like servants, has incredible, disproportionate tantrums and epic woe-is-me sessions; but it’s not longer to an UNBELIEVABLE degree. It is to an epic degree – but it’s no longer at a level that is inconceivable for a teenager to adopt. Her behaviour is potentially real and human

Of course, not all teenagers are like this, not even close. And, if I didn’t know better, I’d put Elena down as a teenager of 14-15 by her behaviour and viewpoint rather than 17. But Elena is now a realistically possible, albeit immature, 17 year old character who we have probably all met before or something close to it, she’s not the mutant hellbeast of raging selfishness. So that’s a step up.

But I’m left with 4 issues on this.

Firstly, if she is a, rather immature, 17 year old then why, in the name of all that is sensible, are Robert and Judith encouraging her to date the college student who was polite to her at dinner one time? I get that this is the convoluted foreshadowing of the love triangle and an attempt to create conflict for Elena’s tantrums by having her guardians be so against Stefan – but they can be against the guy they suspect of murder without deciding their 17 year old niece needs to be dating college students.

Secondly – ENGAGED?! Are the readers supposed to SUPPORT this choice? Are we supposed to sigh and say “oh it’s so romantic”? Or are we actually meant to have our jaws drop in sheer horror before gasping aloud what a terrible, awful idea this is.

Thirdly – why are her friends so epicly, amazingly loyal? Why do they even like her, let alone be willing to break into houses for her? While her treatment of Meredith and Bonnie is better than it was, it’s still poor and their lives still all centre around Elena. Everything Meredith and Bonnie do is based on serving Elena – even Bonnie’s psychic gift centres around Elena! And Matt? Ye gods that man needs a spine, some self-esteem or to get out of town because Elena has some kind of spooky toxic hold on him. I think she might be his secret crack dealer because I can think of no other reason why he does what Elena and Stefan ask of him. I don’t understand why Stefan is so completely gone on her unless it’s entirely because she looks like Katherine. I don’t understand why Damon is fascinated by her unless, again, it’s because of her resemblance to Katherine.

Fourthly, and most strongly, are we supposed to like Elena? This is a major thing for me.

Now, it’s not always necessary to like the protagonist of a book – and it’s certainly a good idea to make them flawed for fear of them – but I think there needs to be some connection. On some level there’s to be a reason why I, the reader, am interested in Elena’s story – and I really don’t think “tiny possibility of seeing her eaten by monsters” really counts. To me this is a real barrier in the book because I have a strong dislike for Elena. That doesn’t make her an unrealistic character – I dislike lots of real people as well! That doesn’t mean (contrary to what reality television seems to think) I’m interested in their lives. Am I supposed to be rooting for Elena? Am I supposed to feel sympathetic when she has her tantrums or angst fests? Am I supposed to exult in her victories? Because I’m not – I just don’t find anything about this character pleasing. Again, realistic, but is that good for the book?

I can’t say I understand any of the side characters – they just aren’t developed enough for their motives to be clear. And this, unfortunately, includes the antagonists Tyler and Caroline. I get that they dislike Elena and I get that Tyler has some kind of familial grudge against the town. But they amount of time and effort they’re putting into this, Caroline apparently changing over the course of one holiday?

Without the characterisation we just seem to have a whole lot of things happening because the author says so: Tyler and Caroline hating Elena. Meredith and Bonnie and Matt being so Loyal. Stefan and Damon being fascinated by her. Aunt Judith pushing Damon as a love interest. And it’s not just characterisation – several of the plots and reactions rest on this same lack of foundation – this same “it happens because the author says it does.” Elena goes storming out into the night after an overblown argument with her aunt. A teacher invites his whole class round to his house for a party. Caroline reading out Elena’s diary could be the worst thing ever. Sure it could be embarrassing, but it’s more likely to get the town founders pissed at her for reading a teenager’s diary rather than the poetry reading she’s supposed to be doing. None of it feels real to me, everything needed a little more development or explanation or build up to make the actions of the characters, the reactions etc less strained.

I also have a sneaking suspicion that book 3 is going to open with the GRAND REVELATION that Damon isn’t the one behind all the bad things in this book and then we shall be Shocked and Surprised despite the really unsubtle foreshadowing.

I think this book is a step up from the last one in many ways. But I’m not sure if this points to an improvement in the story or whether there’s simply less opportunity to repeat the same problems. Without Elena stalking Stefan, we don’t have the same skeevy behaviour. With so little Stefan in the book, we get a lot less melodramatic angst. With Bonnie and Meredith loyally on side, we don’t get Elena lashing out at them for being disobedient.  Is this a step up or have we just wandered away from the mine field? And I need some indication of this – I can live with Elena if I have the assurance that, yes, she’s young, she’s immature, she’s going to grow and a beautiful butterfly is just waiting to emerge from this nasty little caterpillar. But I don’t see it yet.