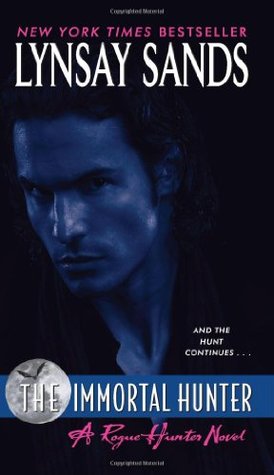 Decker Argeneau is finally getting his long awaited vacation.  Before Decker can settle in however he is called in to put a stop to a crew of really violent rogues.  The chase becomes intensified when Decker learns that his cousin and Rogue Nicholas is also hunting the murderous crew.  Determined to save the latest victims Decker dives in head first only to be shot for his troubles, trying to save Dr. Danielle McGill.  Decker quickly learns that the best laid plans go astray when the leader of the rogues manages to escape and kidnaps a young woman to torture for later.  Unfortunately the kidnapped young woman turns out to be the sister of Danielle, Decker's lifemate.

The Immortal Hunter is in part a continuation of Rogue Hunter.  It's been about two weeks since Sam and Mortimer have declared eternal love for each other and worked out a way to live together.  Decker and Danielle's relationship takes the same predictable turn that Sam and Mortimer's did with the exception being a misunderstanding which has to be solved. Due to Lynsay's typical woo woo justification, Decker is immediately in love the moment he realises that he cannot read Danielle.  Danielle questions her own feelings for Decker however and reasonably considers that she might be in lust but of course, this quickly (and by quickly I mean 2 days), becomes love.

We are told how much Danielle loves her sister and her desperation to find her; however, she spends quite a bit of time fixated on Decker.  Yes, the lifemate thing is used to justify this but it makes Danielle a very unlikable character.  To be having sex for hours on end when she knows that her sister could be being bled dry, physically assaulted and potentially raped, does not speak well of her.  The happy ending with the sisters being reunited doesn't fix that.


The Immortal Hunter introduces us to two different kinds of vampires: Edentate and No-Fanger.  I found myself asking why Sands is just getting around to this in book eleven?  It makes no sense given how often she has described the nanos and life in Atlantis.  It reads as a cheap gimmick with no forethought.  Endentate's and No Fanger have no fangs and in the case of No Fanger, they are mentally disabled.  Have you guessed the problem yet?  No Fangers are not only mentally disabled they are absolutely homicidal and incredibly violent. This makes the first introduction of a marginalized character in this series incredibly problematic to say the least. Can we just do away with the violent neurologically atypical character please? It flies in the face of the reality of those with mental disabilities.

Once again, we have another book in this series which has no LGBT characters but decides to invoke them using a reference.


"Well," Justin said finally when no one else seemed eager to speak.  "I thought you'd never come out of the closet." (pg 117)


This little joke is told after Decker and Danielle are found passed out in the closet (cause fainting after sex is just what happens in this series).  It's not at all funny.  I would like to know why Sand keeps invoking LGBT people but cannot seem to get around to including an actual character?

The Immortal Hunter is also as erased as every single book in this series despite taking place in Ontario, Canada.  Where are all the damn POC?  It's ridiculous and insulting.  Having lived in this province my entire life, I know that there is no reasonable justification to this beyond Sand doesn't seem to give a shit that we actually live here.

By now, these stories I'm sure are written by rote.  We know that some vampire is going to fall in love with a human because well lifemates and they will get their HEA.  Each time, we will get introduced to another member of the ever expanding Argeneau family. This in fact seems the only thing holding this series together.  I never really expected much from this series given that it's paranormal romance but the exclusion continuing into book 11 of all things is beyond offensive at this point.