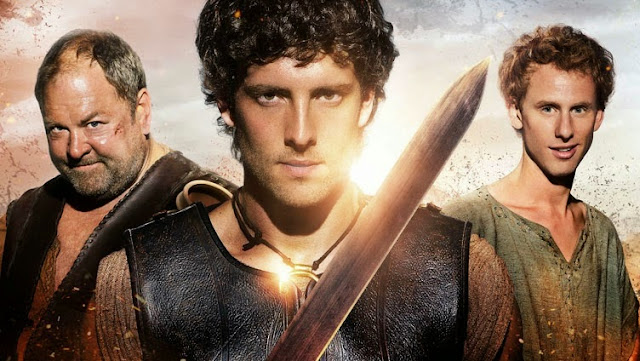 Pasiphae and Medea are delivered the news that Jason and Ariadne are to marry. Pasiphae is all angry at herself for being all weak about Jason and she will kill him before losing Atlantis.

In Atlantis there are other oppositions. General Delmos, Ariadne’s new advisor would like it be known that Ariadne marrying someone with no royal blood, connections or anything else is a terribad idea and the nobles will really not accept it and will become enemies. She cannot rule without their support – Ariadne is actually kind of petulant in response to his very clear advice.

Ariadne decides they need the gods’ blessing – which means consulting the Oracle. Which will mean the Oracle actually making sense for once. I don’t have high hopes for this. This requires a blood offering to the gods

Hercules thinks this should be fine and the gods will be super happy since Jason actually is of royal blood, unknown to him. Pythagoras has more suspicion about assuming anything about the Greek gods.

The ritual goes ahead and they offer their blood while also tempting fate by saying they know they’re meant to be together no matter what the gods say. Someone’s just asking for a thunderbolt there. Equally Pythagoras notes nobles who are never going to be happy about the marriage.

After a tense night the Oracle has her message – it’s all goods and she tells her priest Melas that the gods have blessed the union.

But shadowy figures also infiltrate Atlantis and they attack the Oracle (but not before she gets a few slashes in). Jason arrives after the attack and rushes to the rescue. Well, almost rescue, he takes down most but doesn’t look behind him so gets knocked unconscious. Well, you tried.

The Oracle is taken by Pasiphae’s minion. Of course, without the Oracle (as Pythagoras points out) they can’t claim the gods’ blessing (it would look suspect “the Oracle… who isn’t here right now, says the marriage is totally ok. Honest”).

They suspect a spy at court and naturally suspect Delmos because he dared to give good advice. We switch to Pasiphae who confirms they do have an agent in court. She also goes to see the captured Oracle and Oracle lets loose with both barrels about what a terrible person Pasiphae is, hitting several sore spots. In turn Pasiphae casts derision on the Oracle’s power and faith. She also plans to have the Oracle killed despite the gods disapproving of such shenanigans.

Medea takes a huge ominous wooden crate to the temple. It’s all quite ominous. Whatever’s in there is so terrible she’s willing to fling soldiers across the forest rather than have them peek inside. C’mon Medea, the CGI on this show isn’t that bad.

Having brought the crate to the temple, Medea and Pasiphae clear out the guards and open the box. Inside is Medusa (YAY! MEDUSA!) Apparently Medea and Pasiphae are immune to her stony gorgon gaze like Jason – and she’s been told that Pasiphae has a cure, for a price of course. The price is to kill the Oracle. They take her into the Oracle’s cell and the Oracle turns to face her

In the woods, Jason & co have wandered around looking for Oracle and find the temple, though they’re suspicious of the lack of guards. They enter the temple and Jason sees Medea and Pasiphae leave – before they find the Oracle statue, broken. Of course they know that Medusa must be behind it, even as Hercules denies it.

He runs and finds Medusa – restored to her humanity. I wouldn’t get comfortable, she has an Oracle curse heading her way. Their reunion is tarnished by the knowledge that Medusa killed the Oracle since she couldn’t abide any longer alone in the cave. Hurriedly, Hercules encourages the tearful Medusa to leave and go to a hunting lodge he knows so Jason and Pythagoras don’t find her. She leaves and Hercules lies to the others to protect her

Back in Atlantis they bring the bad news to Ariadne and Melas – and telling Ariadne who killed the Oracle. Ariadne demands that Medusa be brought before her despite Hercules’s objections with Melas adding that epic punishments have to fall on Medusa.

At home, Hercules won’t eat or be comforted by Pythagoras. He insists Medusa was forced and refuses to hear that the time spent cursed and alone could have changed her.

Jason has also decided to sink to angst – deciding it’s all his fault for wanting to marry Ariadne, woe is him. He goes to Ariadne to share his angst because of the damage their wedding causes at least they quickly leave the Oracle’s death behind and focus on just how unsuited it is. Ariadne also, wisely, points out that Pasiphae clearly fears them getting married which is definitely a good sign and a good reason to marry.

Ariadne insists on going ahead with the wedding and demands Melas set a date, even without the gods’ blessing. Pasiphae’s agent hears of this and threatens Melas, insisting he find a way to stop the wedding.

That involves arresting Jason for the murder of the Oracle which is…. Beyond ludicrous and virtually points a flashing finger at Pasiphae’s agent. Pythagoras realises that Melas is Pasiphae’s agent – because Melas has just jumped up and down on his cover and ensured it’s well and truly shattered to teeny tiny pieces.

Delmos takes the news to Ariadne who charges in, thoroughly outraged. Melas fumbles for a reason and lies, claiming the gods had not blessed the union. He also points out that Jason was the first on the scene after the Oracle was taken. Jason, low on the uptake, realises Melas is the betrayer. Ariadne can’t overrule him, however, because he keeps waving godly authority about – but she clearly implies Melas will also face judgement

Melas declares Jason guilty and sentences him to death.

I really wish that we’d just have Poseidon appear all watery and bullish and roar “what is this fuckery here?!” But then I wish that about most of our shows (c’mon it would have improved Last Man on Earth!)

I’m glad to see Jason took a moment to express how sad he was with the Oracle’s death – not for the woo-wo she gives but because she has always been there for him. Ever since the pilot she has provided her dubious advice and rather useless guidance – but she meant well and it’s right he should be sad for her, not just that it’s a barrier to his wedding

MEDUSA! I always loved her (I also always love Jemima Roper who needs to be in a lot more shows than she is) and it was good to see she and Hercules back together: she sold the despair of Medusa’s choice really well and I’m glad she’s still the top of Hercules’s priority list (especially since it didn’t involve a ridiculous decision)

Jason getting all angsty – aaargh, I can take sadness but this blame is annoying. It’s not like the Oracle was killed by a disgruntled noble (and, yes, there are plenty of reasons why this marriage is political unwise so questioning the marriage I can understand), but by Pasiphae. Rather than saying “this is my fault” consider that Pasiphae has already tried repeatedly to kill Ariadne and will do anything to stop her securing the throne of Atlantis – there is no justifiable reason for guilt here: Pasiphae wouldn’t go away just because Jason wasn’t marrying Ariadne. I’m glad Ariadne doesn’t just bring love as an argument but also some decent sense: by all they know, Jason weakens Ariadne so why would Pasiphae oppose the wedding?

I almost have to admire how thoroughly Melas blew his cover. They didn’t keep us wondering long about that, did they?