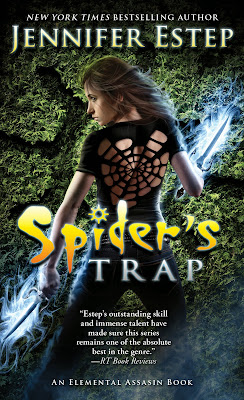 When a bomb nearly destroys her friend Phillip’s boat while Gin is negotiating a deal on board between several underworld leaders, Gin naturally assumes that she is the target. After all, becoming head of the underworld (however reluctantly) has hardly reduced the number of attempts on her life

But sometimes not everything is about Gin. And when she realises that one of those bosses has a difficult and dangerous past – a past Gin herself was involved in – it’s clear she isn’t the target. Of course, that doesn’t mean Gin won’t feel responsible – or feel the need to help. Whether her help is wanted or not.

There’s an issue with this book – and this series – that I find myself a little torn over. In this book, Gin is driven to fight a big bad guy because he is a terrible abusive arsehole hunting someone down and she just can’t bring herself to say no to anyone in distress. The big bad has Super Special Magical woo-woo that is either a) very rare or b) very powerful. They fight, Gin does badly for a while and then comes up with plan, goes in and stabby stabby killy killy. Job’s a good ‘un to Jo-Jo’s for healing (because the fight will involved Gin apparently losing and being terribly injured for some portion of the fight before the big triumphant end where Gin fights back and/or the victimised person manages to lend help that tips the scale so they can be directly involved in their justice).

Right, that, right there? That’s the plot for pretty much every book in this series, even more so for every book after Mab’s death and the lack of any particular meta-plot afterwards. This is the 13th book in the series and it’s not just following the same theme – it’s following the same formula. The basic plot elements, story progression, everything is pretty much the same

We have the opening attack. We have some flashbacks from Gin’s past. We have the initial defeat. We have the injuries. We have the working with her team for a solution. We have the unique power (acid, lightning, vampire soul draining, water, etc etc). We have her leaning on her friends but them not taking up too much page space and then we have the victory. It’s the same very rigid, very narrow formula.

But I do enjoy it. And I think there are several elements of this series which are excellent with it. We have a hero who is extremely powerful and skilled but who, despite all that, continually relies upon her support network and friends to get the job done. I like that she doesn’t do everything alone, that she is close to her support network and that includes other women (gasp!) and family! (who are not all dead tragically – well except her parents of course). I like the little snippets into the past that her dreams bring. I like her interactions with her friend. I like that she manages to bring down the big bads with intelligence rather than just awesome gnarly power (which also being immensely frustrated that she never seems to use her power in anything like an effective manner).

I like the pacing of the book, I like how the story develops, I like the balance of character interaction, victory and defeat. I like how the fight scenes unfold and how they’re described. I like Gin’s cooking and how much that matters to her and is an important part of hr life. I like her signature patience and how that has been developed throughout the series. I like her mutual respect with Sophia, Jo-Jo and her sister which has developed nicely over the series. I like her relationship with Owen and how, though he’s always there to back her up, he never tries to take over or “protect her”. I like that there are other powerful figures in the world, including powerful women, who are not evil nor part of Gin’s fanclub

Especially since, unlike some of them, this book has no real meta-plot. Gin is now ruler of Ashland’s underworld but doesn’t actually do anything with that, regarding it only as a nuisance that takes up her time. There’s no indication of this having any effect on her relationship with Bria, her police detective sister (I mean, it’s one thing when Gin was a vigilante assassin which took Bria a long time to get over, but now she’s effectively uber Godfather it’s not worth commenting on?). There’s no big bad like Mab or her descendents. There’s a shadowy, mystery someone working against Gin who was set up for a cliff hanger for next book but there’s not much there for it to develop more than that in this book. It’s just monster of the week- and a very repetitive monster of the week – with nothing behind it.

In terms of inclusion, Gin does have some POC in her circle – Roslyn, Xavier, Silvio and Catalina are Black, Black and Latino, Latina respectively. But they’re also the most distant of her circle, Roslyn and Xavier hardly appearing while Catalina and Silvio are employees and all Silvio, the most prominent of them, does is follow Gin around with a to-do list. They’re not close to as involved as Finn, Bria, Owen, Jo-Jo or Sophia, her core group all of whom are White. We also have a POC dwarf called Mallory who is elderly and awesome – who I really wish we could have seen more of, her moving through the oh-so-delicate southern Garden Parties with her acid tongue (throwing around “bless your heart!” like it has razor edges).

Silvio is this book – and this series’ – only LGBT character. Except, again, I only know this from a single line in book 11, Poison Promise. If you had forgotten that single throwaway line, two books ago, there is no indication in this book (or the last book) that Silvio is gay or bisexual.

This book does excel with the excellent women around Gin: Bria, Jo-Jo, Sophia, Lorelei, Mallory and even Roslyn (for all her brief appearance). They’re all women, they’re all awesome at what they do, but what they do is also different – they have different strengths, characters, priorities and skill levels but none is considered less due to their changing focus. There’s also a lot of respect for sex workers in this series I appreciate – they’re people, they’re professionals and Gin will respect and protect them for that even as they are vulnerable.

I don’t know where to go on this book. If I look at a basic “did I enjoy it?” then the answer is, yes. I did, I enjoyed it a lot. It was a fun, very well written book. But it also added nothing to the over all series, felt very paint by the numbers and, if I had bought it (this is an ARC) I think I’d be faintly annoyed that I had paid money for a book when I could have just picked up one of the precious 12 and read that instead and still got most of the salient points. IO enjoyed it – but of course I did, I enjoyed it the first time as well. And the second. And the third. And the fourth… at this point I kind of feel like it’s just scratching off the serial numbers, jiggling things around and retreading the same path.

It’s still immense fun. I don’t regret reading it – but I kind of wanted not so much MORE so much as something different.