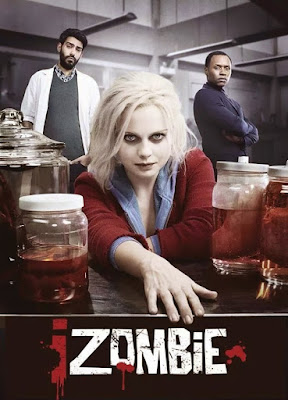 Major is still in the mental institution he checked into (which opens with classic “look at the nameless inmates twitching and babbling in the background”) – when he new friend Scott, the man who warned him about zombies, apparently kills himself

In come our crime solving crew and Ravi points out that if Scott had actually killed himself, there would be way way more blood. The quest Mason who tells them Scott was having sex with a woman called Brie and that he beat Mason at chess (and, yes, Clive you deserve that sarcasm).

They talk to his doctor, Dr. Larson, who tells them Scott had a breakdown following the massacre at the boat party – where Liv became a zombie. And that he was best buds with Major. So Liv goes to talk to him more and he asks if she saw zombies at the boat party. Ooops. And Steve has a video on his phone which he’s sent to someone on TV double oops

Liv begins to doubt how sensible her plan to keep Major in the mental institution was. While Ravi learns the cause of death was a drug’s overdose – and we get a warning that Scott was mentally ill so Liv may need to be careful with his brain; but she insists that she needs the brain to get the video.

Also worrying is Liv getting all odd-brained because Ravi is visiting for a date with Peyton who they’ve let out the plot box! Chinese food and tv night! They’re joined, to everyone’s surprise, by Major who checked himself out. He’s actually there to get a key to his home since Ravi changed the locks but he’s quickly invited for food and tv. They opt out of the horror film though since it has mental illness tropes and that would be Awkward. Also zombie shows, Awkward.

Oh and Liv starts hearing voices and hallucinating. Ravi is rather gloriously blasé about it.

Later Major and Liv have a moment and Liv invites him to stay and use the couch so he doesn’t have to go back to the house where he was attacked (which, side point, also technically means Liv just told him she believes he was attacked by Julian and it wasn’t just a hallucination).

Liv does have a useful hallucination that, apparently, Scott’s lover was trying to get pregnant which Scott wasn’t happy about. And we see Major shirtless which is always a good thing.

Liv goes to the mental hospital to get Scott’s phone – but it’s gone missing. She does get a list of people who visited him though and that includes Blaine. She and Clive also interview Brie but between her talk of devil worship and Liv’s hallucinations it doesn’t go well. They do learn that Brie isn’t pregnant and doesn’t want to be.

To Blaine and his evil enterprise – and Suzuki visiting for his shipment with Blaine dangling the brains in front of a clearly (but subtly) rather desperate Suzuki who takes the hint and tells Blaine that Liv was connected to Lowell. Suzuki definitely hates being under the thumb. Blaine refuses to answer any of Suzuki’s questions especially about his new project

Blaine goes to the morgue, ostensibly to continue Ravi’s investigations into a cure – with a whole lot of tension between everyone. Liv considers poisoning him but he insists on sharing the drink. So either they’re both immune or she decided against. Turns out she decided against simply because she had no idea what would actually kill a zombie. They do take the chance to ask Blaine about Scott but he adds nothing useful

Clive interviews Major without Liv around so he can actually ask harder questions without Liv playing champion. Other than Scott’s clear reluctance to become a father, they don’t learn much.

While in the morgue, Liv gets a visit from Johnny Frost, local celebrity weatherman who they’ve met before, who is a friend of Scott’s and is there to identify the body. He reveals Scott was his pot dealer and he was at least somewhat concerned about him. For some reason this annoying weather-man has a habit of commenting on the weather all the time – and he didn’t get any video from Scott. He does know where his valuables are hidden though. In fact something really needs to murder this guy.

Liv does get Scott’s lap top and uses it to track his phone, taking the weatherman with her. Of course she’s not the only one looking for it – so is Major and he breaks into Scott’s house and is nearly caught by Julian and Blaine doing the same – only they don’t bother searching and just burn it down.

Major decides to hide in the boot of their car. Major does not make good decisions. He does find the delicatessen where Blaine works and supplies his brains.

Back to Liv who discovers the orderly working in the mental hospital has Scott’s phone (and a huge stash of drugs). She claims it as a vision which Clive finds interesting but knows he can’t legally get a warrant for. So she stages an out of control party there and calls the police – after leaving the drugs out

Liv goes home to cuddle with Mason and the next day is called by Clive to tell her that the orderly has been arrested. He tells her not even to pretend to act surprised. The orderly admits to pawning dead patients’ things then points his finger at Dr. Larson who is pregnant with Scott’s child. She denies a lot – but they both guess she will confess if it will avoid a paternity test: since we know Scott’s family emotionally abused and abandoned him, there’s no way Dr. Larson will want them to have anything to do with her baby. She reveals Scott threatened to expose her if she didn’t have an abortion – it’s her confession.

At home, Liv is furious about Larson’s completely failure of ethics (a shout out to Liv’s medical training and ethics which we’ve had mentioned before) and while she rants, Major kisses her. She steps back wondering where that suddenly came from but Major is desperate for some answers – why did their relationship end? And Liv tells him, yes, there were zombies at the boat party

She tells him zombies exist. And that one of them scratched her. He’s now in on the big secret, that this was why she called off the wedding and, yes, zombies killed the homeless kids. Major takes a moment but when Liv asks how it feels to know the truth he says “better” and hugs her.

Back to Blaine who has his big order of uber expensive astronaut brain when one of his minions tells him a whole shipment has been stolen. Blaine stabs him in the neck – a non-lethal wound

In the morgue, Ravi keeps experimenting on zombie rat – and seems to succeed in curing it.

Back to Liv still with that damn weather man – who turns out to have been a hallucination all along, giving hints from Scotty’s brain. One of which she uses to open his phone. She finds the zombie attack footage – including footage of her eating her first brain.

Looks like the emotional revelation scene was another hallucination.

Damn it, iZombie, your bait and switch is naughtybadwrong! Though in some ways I AM happy it was a hallucination because Major’s reaction was emotional and pretty and…. Way way way too simple. It also makes me wonder how much of this episode was real?

I also liked Liv’s ethics rant because she’s pointing out not just that we had a man and a woman having sex and then her murdering him and him trying to force her into an abortion (an act which didn’t get sufficient condemnation) – but a sexual relationship between a patient and a doctor, a mentally ill man and his therapist which is a grossly predatory dynamic.

Every episode with Major in it really should be have the subheading “Major should not make decisions.”

But iZombie has a problem – far too often mentally ill people have been used repeatedly to bring comic quirks for Liv’s brain of the week. It has happened way too much, the issues touched on way too shallowly. They are there for comic relief. They are there for a new randomness without any real respect for the experiences or lives of people who live with these conditions – and with those people we only have depictions of them in the background in a very clichéd mental hospital depiction.