The Lady in Pink (Deadly Ever After #2) by J.A. Kazimer 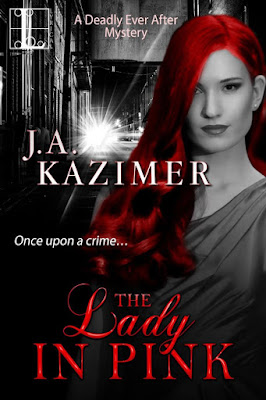 Blue and Izzy’s new detective agency is going from strength to strength and has become a household name (even if your house is a shoe). They have offices now and a staff and are a growing success

But when one of their interns is murdered it looks like Blue could be the target – and even so, losing an employee just has to be investigated. But as they delve deeper the opposition becomes stronger as they uncover more connections with Blue’s mysterious past. And his curse.

The plot of this book is interesting but I’m in two minds about it. The whole mystery of Blue’s origin, how it fed the conflict between Izzy and Blue, the whole opposition against their discovery and how it pops up in several different ways all work really well. I like how it’s related to several parts of the story and is both part of their profession and personal lives and allowed for some character growth

It also has a series of excellent Noir-style cross and double cross as victim and suspect constantly changed and changed and changed again. It had some really good twists and unexpected endings. I honestly didn’t have any idea where it was going or who the culprit was and I was completely surprised several times. I appreciate that in any book, especially a book with a murder mystery. Being kept guessing is always an achievement.

So lots of positive. On the negative side I feel the ending was sprung on me without any real back up to it. I didn’t see it coming – but how could I? All the relevant information was dumped in the last part of the book – there was no way to extrapolate to this and that whole revelation felt abrupt and rather sudden. There’s a twist and an abrupt change of direction. Still I am curious as to what that means for the future

I also quite like the whole debate over whether Blue’s abilities are a curse or a blessing – and I think it’s actually done really well (after I’ve read a huge number of books where the “curse” has had no real downside).

For me there’s a strange disconnect with this book’s – this series’ – world building which I’ve touched on before. On the one hand, the original elements of the story are excellent. The whole idea of fairies that produce dust and need dentin to exist – that’s an excellent original concept I really like. It takes the idea of the tooth fairy and elevates it and explains it. It’s interesting and it’s original and there’s some genuine thought behind it that I appreciated.  There are other hints of things that I think have high potential – like the very original Trolls. There’s a lot of really unique elements I’m interested in here

But there’s also a lot of fairy tale elements that don’t mesh well because they’re not remotely developed. I’m going to have to draw on how this is handled in other books to make my point clear. When Jasper Fforde write The Fourth Bear we had a Goldie Locks who was very picky and needed everything to be “just right.” While J.C. Nelson’s Grimm Agency had princesses who had powers and lives that mark that. In this book we have Goldie Locks who is… a woman with blonde hair. We have a reference to people living in a shoe but no development or explanation. We have women mentioned as princesses but it just seems like it’s being used as a synonym for “woman.”

I don’t understand why these fairy tale elements are there if they are literally just going to be used as words. Goldie Locks and Peter Rabbit could be called Susan and Fred if for all the meaning their names mean. It’s frustrating because I’ve seen how well this can be done and this book isn’t doing it

Blue has a lot of wrongheadedness when it comes to his attitudes towards Izzy. He is “protective” to the point of controlling, he tries to keep secrets from her for her own good and he is constantly trying to lock her up or keep her inside for her own safety. This could be seen as a general sense of caution when we consider the threats against him but he has absolutely no regard for his own safety at all – he is reckless to the point of foolishness and it doesn’t look like daring and pursuing a case despite the risk – it looks like defiant childish rebellion. His “protectiveness” of Izzy also comes with a huge amount of jealousy, even as he acknowledges he has no claim on her, he still stalks her and seethes over the possibility she may be in a relationship with another man

The flip side to this sexist patronising is that it’s also pretty clear that he’s wrong. Blue acknowledges it, Izzy calls him out on it repeatedly. He’s a patronising and sexist character who is clearly labelled as such and called out for it. Though he doesn’t get that much in the way of consequences nor does he try to change. At the same time, Izzy also takes it upon herself to hide things from him “for his own good” and equally invade his privacy, so it’s not entirely a one way street either.

Aside from that, I do find Blue an interesting character. I don’t like him, per se. I’m not a huge fan of the self-destructive, reckless, hard drinking grim and rebellious just for the sake of it rebel-without-a-clue character. However, personal taste aside, he is a good and internally consistent character, especially when we consider this isn’t just a grim man with a whole lot of upbringing angst, but he’s also a man with both a curse to make him bitter and make him sufficiently dangerous that he can pretty much be sure he can take down anyone around him. His character works – I don’t like him much, but he works.

In terms of minorities I can’t remember a single POC. There was one probably trans prostitute which was just such a trope that I’m glad that this 2 paragraph “inclusion” is the limit of the LGBT inclusion of the book.

In terms of women we have a lot of sexualising – from Izzy in her pedestal with a lot jealous and protectiveness, and Bo Peep as the cunning, conniving sexy seductress. However at the same time between Izzy, Alice and Bo Peep all of these women are fiercely competent – certainly far more so than Blue. They have a lot more competence, skill and knowledge than the often inept Blue.

I find myself very conflicted about this book. On nearly every element I really like some parts while being frustrated by others. Every great element – from world building to plot, to characterisation, at every turn there’s something I want to point to and say “hey this is cool” and something else that I have to say “this really needs to be better”. It’s brilliant and lacking in equal measure while leaves me so conflicted but, overall, still enjoying it.