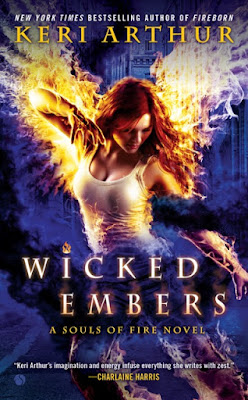 Melbourne is still under threat from the spread of Crimson Death – the vampirism plague that is creating ever more monsters. The research for cure and treatment is becoming ever more in demand from various shadowy organisations all with their own purposes

And in the middle of it is Emberly, the Phoenix, who many people think has the hidden notes for the cure research. On top of that, she’s having prophetic dreams of a new monster in town.

As a private investigator I think Emberly and Jackson are also much more legitimately involved in the plot, especially since Emberly is targeted as well. While the last book she felt inserted clumsily, now she works as a much more central figure to the investigation.

And I do like that investigation. It’s a mystery with lots of questions and numerous factions and twisting plots involved. The central question is still the plague, the quasi-vampires and their terrible infections, possibly apocalyptic disease and any possible cure or vaccination that may exist. But there are so many factions looking for this cure and many motives between them – people trying to make a profit, the Sindicati, a vampire underworld organisation that is now riven in two – with both factions after the information. And being a major underworld organisation, they have their lackies and contacts who also have their own input into the story with their own agendas and organisation.

On top of that we have PIT, the surreptitious police force that challenges the supernatural with their own shady organisation complicated with Sam and his history with Emberley. There’s a lot of things going on and it works

In fact if I have any criticism of this story is that there are too many factions and independent figures. Sometimes a name will come up and I’ll have a blank moment because I can’t remember who they are, which faction they’re part of or what goal they have. There are a lot of characters here – so very many characters and I get more than a little lost occasionally.

Part of this is it actually makes the main plot line seem somewhat out of place. Why are we following this shifting creature that eats people? It’s not that it’s a bad story – it’s actually really fun and well written and interesting. It’s just that the meta is so huge that I don’t think it necessarily fits except, perhaps, to add some new shiny new creatures to the world.

I do wish we could see more competence from Emberly. Throughout the book and their investigations Jackson is the one with the ideas and the knowledge. He knows the city better, he has the contacts, he has the investigative skills. Which is fair enough in a way, she is the investigator. But she has lived for centuries upon centuries – so where is the skill set to back this up? It’s no that she’s weak or useless – far from it, she’s immensely powerful – but that power revolves around her woo-woo. She’s a phoenix and they are might, dangerous beings – and it is actually somewhat rare to see a female character be so overwhelmingly more powerful (and actively so) than her lover and partner – but I do think at times she slightly turns into a fire turret. At the same time, I quite like how she is a power. She’ facing off against all of these major, scary organisations because she is a scary person. Not overpowered and terrifying and certainly there is tension facing off against what these dangerous organisation – but still a sufficient force that they have to respect her.

Jackson and Emberly are very sexual – as are, to a lesser extent, she and Rory. I can’t say I’m a massive fan of it, but I will say that’s more personal taste than any actual flaw in the depiction. They’re sexual, clearly into each other, flirt, have sexy talk and sexy fun whenever they are able to do so. But, unlike so many other books, they’re never ridiculous with it – there’s no pausing in the middle of a chase because they simply have to have sex NOW. There’s no putting off the mission because it’s time to have sex. It fits in the story.

There are not a lot of minorities in the book. There’s a gay man who appears briefly as someone vaguely related to the plot. He’s not a bad character but nor is he, especially, a real part of the book. Then monster in this book is non-western and we have a Filipino Medicine man show up to play guru, woo-woo guide and provider of magical shinies and ominous magical warnings. Brown people providing mystical support while being all exotic and superstitious is not a great trope

There are also some Earth fae who are darker skinned – not exactly parallel to human races but there is a level of diversity among the fae.

I think a better job was done of openly challenging PIT’s tactics and it’s complete disregard for human rights – not as much as I’d like but there’s definitely some challenges which is sorely needed. I’m not a fan of Sam but the revelations in this book do promise he will grow and become a more interesting characters beyond the ominous guy who broke Emberly’s heart.

I continue to be intrigued by this series. The whole concept of the phoenixes is a fascinating and original one. The way Emberly interacts with the world is a really nice one that is quite different from most of there. The world is deep and broad with lots of excellent features and details that I appreciate. The romance isn’t exactly something I love but it isn’t terrible and has managed to not annoy me. There’s a nice level of complexity and nuance and more than a few fun twists – I like it, yes yes I do