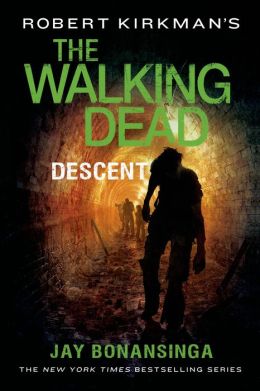 Lilly is now the reluctant leader of the people who survived the Governor.  Lilly feels the weight of responsibility heavily and is quick to act in dangerous situations.  Unfortunately, even having survived The Governor, Lilly and many of the people of Woodbury have forgotten the one lesson he had to teach them - zombies may be scary and lethal in large numbers but the real predator is still humans.

Lilly is the first female leader of a group that we have been introduced to in the book series.  Somehow she doesn't seem to have the same strength as Rick or even Phillip.  Even Rick's most stupid decision and plans always seem to work out somehow and that is most certainly not the case for Lilly.  With Woodbury absolutely decimated and struggling to keep going with its small population thanks to Phillip, the small town is desperate to take in stragglers and build a safe place to survive the walkers.  Lilly doesn't even bother to ask the three questions that in the television series Rick asks each new person who wants to join his group.  Nope, Lilly welcomes everyone with open arms even though she knows absolutely nothing about them.  After surviving Phillip I have to wonder why Lilly isn't more cautious and a hell of a lot more jaded.

She shoots him a hard look.  "C'mon, Cal ... you know very well what happens if they find out about my ... my condition.  Remember the KOA camp?"

"Those people were paranoid and ignorant"  He walks over to her, kneels by her chair, puts a tender hand on her knee.  "God brought us here, Mer."

"Seriously. Listen. This place is a gift.  God has brought us here and he wants us to stay.  Maybe that older man - Bob, I think his name is - maybe he's got medication you can use.  This is not the Middle Ages."


"They drilled holes in the heads of the mentally ill back then - it's worse than that now."

"These people aren't gonna persecute you.  They're just like us, they're just as scared.  All they want is to protect what they got, make a safe place to live"

Meredith shivers.  "Exactly, Cal ... and that's why they're gonna do exactly what I would do if I was them and I learned somebody in their midst was a mental defect."  (pg 22)

Cal does ask for the group to keep a look out for medication on their searches for supplies but Lilly never gets into great detail about what the drugs are for or what happens when Meredith doesn't have them. Cal warns Lilly that "it's an invisible illness. Most of the time.  But these days, it's very dangers - a very dangerous liability."  Lilly doesn't ask exactly what danger Meredith poses even after learning that the Duprees have been kicked out of two different settlements.  Cal tells Lilly that Meredith has bipolar disorder and clinical depress and has tried to take her life a couple of times since the turn. To me, that sounds like an opening to ask some questions but Lilly simply moves on.

After Meredith sacrifices herself to save Woodbury from an epic horde, it's not long before Cal and Lilly are sleeping together.  Why does Lilly even need a love interest in this story? And what the hell kind of person is Cal?  His wife's body isn't even cold before he has moved onto Lilly.   If that were not enough, still knowing virtually nothing about him, Lilly invites Cal to sit on the ruling council for Woodbury.  The insta trust routine is something that we haven't seen any male leader do to date.

The insta trust is bad enough once but then Lilly does it again with Reverend Jeremiah and his group of sycophants. Bob, the man that Lilly trusts the most is absolutely adamant that something is wrong with Jeremiah and states repeatedly that the man cannot be trusted. Does Lilly listen to Bob or even entertain the idea that maybe she should be more cautious? Why, of course not.  Lilly assumes that Bob's reticence is about his distrust of religious people.  It's not long before Jeremiah joins Cal on the ruling counsel and an even shorter step from there before Lilly promotes him to co-leader. Yes, you read that right.  She doesn't promote Bob who has been by her side advising her from the beginning but Jeremiah, a man she hardly knows because he is quick to pitch in around Woodbury and she is tired of being the leader.

Not only is Lilly the leader of the small band of Woodbury survivors, she is one of two women to be featured prominently in Descent and she is absolutely ineffectual and ridiculous.  Lilly gets caught up in her feelings for Cal, ignores Bob's warnings about Jeremiah and simply blunders around getting absolutely nothing right.  I cannot imagine that this would have been the characterisation of any male leader in this series.Not only does Lilly not see the danger coming, it's Bob who rescues the survivors of Woodbury and Bob who has to tell Lilly that the town cannot be saved.

Meredith's mental health is heavily discussed in the first part of Descent and unfortunately, it is treated as a burden particularly to her family and a threat to anyone she happens to be around. Lilly refers to herself in the most ableist terms: "mental defect" and "Nuttier than a soup sandwich."  Calvin has no idea how to help and his solution is to continue to pray that somehow God will intervene.  As aforementioned, Meredith saves Woodbury from the zombies by detonating a bomb.  She should have been hailed as a hero for her great sacrifice but that is the opposite of Lilly's reaction at the woman's funeral.


Lilly can see a sense of relief on the man's gaunt features as well.  Maybe Meredith Dupree had come to weigh heavily on her husband, like a yoke, pressing down more each day.  Maybe the burden of her mental illness had taken its toll., and no matter how sad her exit from this world had turned out to be, it was probably, when all things were considered, for the best. (pg 76-77)

Yes, Lilly's thoughts are absolutely self serving given her attraction to Cal but they also speak to how disabled people are characterised in this world.  They are something to be feared, something to be controlled, and most definitely people who are better off dead so that others can get on with the business of surviving a zombie apocalypse.

The antagonist of Descent is Jeremiah, who doesn't want to rebuild Woodbury despite the way he pitches in.  Jeremiah is the leader of a death cult and believes that the best way to save people is for everyone to die and be with God.  I think this entire plot line is a great statement on religion.

This is the first book in the Governor series to go over material that has not been previously published in the comics or addressed somehow on the show.  It can be read as a stand alone novel if you have read at least to the fall of the prison in the comics series, or seen at least to the fall of the prison on the show.There is really no mention of Rick et al, so skipping Descent will not make you miss anything from the original Walking Dead storyline. That being said, as a leader, Lilly is absolutely pathetic and I don't understand why the people of Woodbury allowed her to lead instead of someone like Bob.

Much of Descent seems extremely choppy and that is because the story shifts from concentrating on Meredith and her mental illness, to the threat that Jeremiah poses to the small town.  It feels like it has no continuity and reads like two stories within one book.  It's almost as though the author had no idea what direction to take with this story and just sort of patched some ideas together.  While Descent had it's problems, it's the first book in the Governor series since Rise of the Governor which doesn't feel like a money grab.  It's not a great book by any stretch of the imagination but might hold some interests to fans of the series who want to see what happened to Woodbury after Philip died.