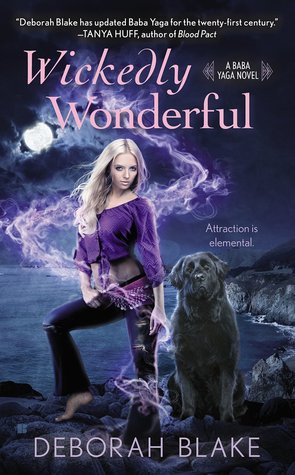 Beka Yancy is the youngest of the three North American Baba Yagas.  Her mentor has recently retired to the Otherworld and Beka finds herself dealing with an environmental disaster that leaves her mystified.  Not only are the selkies and merpeople dying but the fish have disappeared from the ocean leaving the local fishermen all struggling.  Beka has vowed that she will solve this problem but despite a number of dives, she has absolutely no clue what is happening.  If that were not enough, Kesh,  the prince of the selkies and a local fisherman named Marcus are both vying for her attention.  Beka doesn't know which way to turn and even starts to wonder whether or not she is cut out to be a Baba Yaga.

Wickedly Wonderful is essentially a paranormal romance; however, while the romance between Marcus and Beka features largely in the story, it never overwhelms the mystery of why the ocean has become polluted.  Beka is steadfast in her search and never stops working towards her end goal, even though she is constantly battling with the taciturn Marcus, who is not found of hippie people. Because of the way that Wickedly Wonderful is written, we know from the beginning who is responsible for the pollution and his motivation and simply wait for Beka to figure it out.

Beka is very different from Barbara, the protagonist in Wickedly Magical and Wickedly Dangerous. Barbara, being older than Beka, is very confidant and sure of her magical powers.  Beka spends much of Wickedly Wonderful doubting her abilities despite constant assurance from Chudo Yudo.  Beka is supposedly so insecure because she was raised without any positive reinforcement from the retiring Baba.  My issue with this is that Beka is almost a 30 year old woman and while she might reasonably have some doubt in her abilities, I think it went a touch too far.  There is also the issue of Beka's naiveté. Everyone who interacts with Kesh for instance, almost immediately says that they don't trust him, yet Beka has several meals with him and even makes excuses for his behaviour.  Beka only questions Kesh's behaviour when he gets into a testosterone pissing match with Marcus over her. I like that Beka declared that she is not a commodity to be owned but I would have liked her to question Kesh's motives more, particularly after learning that Kesh was on the outs with his family. Beka just seems to keep making the same moves though it is not progressing the case that she is investigating and I found that to be extremely frustrating.


There is also the issue that Blake does occasionally lean towards purple prose in her descriptions.


Beka shone beneath him like the ethereal luminosity of the full moon, like the sun on a perfect hot July afternoon, like hope at the end of the darkest hour.  Together, it seemed that they could reach new heights that neither could have achieved alone.

Finally, finally, he sank himself deep inside her, rocking and thrusting and stroking until they reached those heights in a fiery climax of passion and glory and joy, accompanied by one final clap of thunder that seemed to rock the entire world.

As they lay together in a sprawl of damn limbs and satisfaction, the storm eased to a gentle rain, and one by one, the candles guttered out until a few remained. (pg 294)

In terms of representation, Wickedly Wonderful is pretty much erased.   The only reference to GLBT people occurs when Marcus worried momentarily that Beka might be a lesbian.  The only character of colour is Chico, who Blake describes as "an illegal immigrant", who works for Marcus's father.  We learn that his family is still in Mexico and that he sends money back to them and is a great fisherman.  That's it.  To call him a side character is to be extremely generous.

Then there is Brenna, a "hippie earth mother stuck in the sixties" and a former Baba Yaga.  Brenna is described as being not completely sane by Chudo Yudo.  Many characters express fear of Brenna and  relief that she was forced to retire.  Brenna's goal is to undermine Beka at every turn so that she regain her position.  Considering that there are precious few interaction between female characters in Wickedly Wonderful, it's absolutely a problem that Brenna is jealous of the much younger Beka after being replaced by her.

In spite of its short comings, Wickedly Wonderful isn't a bad book though it could never be called a great book.  It's mildly entertaining, though Beka is extremely frustrating as a protagonist. Wickedly Wonderful is the kind of book that you spend the afternoon at the beach reading to pass time.  It can pretty much be read as a stand alone novel, though Barbara makes an appearance towards the end of the novel. I love the forever grumping Chudo Yudo though he doesn't spend much time as a dragon. Wickedly Wonderful won't put you to sleep and its moderate pace despite the lack of real use of the Baba Yaga mythos will keep you entertained.