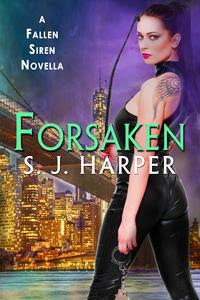 But all of that has to be put aside when a multi-billionaire’s son is kidnapped and his babysitter murdered possibly due to an extreme act of revenge or just simple greed? Answers that can only be found by being professional, putting their issues aside – and going undercover in a sex club

As a book reviewer, there’s a repeat problem I have when reviewing a series I like. How do you say “I love this book for all the reason I loved all the previous books in the series” without sounding repetitive or lacklustre? It’s hard to make it clear that the elements that you love about a series are still making these books ones you really love to read without sounding like it’s stalled or run out of ideas

This is a short story in the Fallen Siren Series and, yes, it contains many of the elements that have made this one of my favourites:

We have a police investigation that is interesting, tense, exciting and relies as much and more on actual investigative skills as it does on magic (now I do love magic heavy series but I also prefer my investigative protagonists to actually have skill rather than deus ex machinae powers that are so often used as an easy way to solve the mystery without a coherent plot).

We have characters who have a romance – but put it aside. Again, in a genre where all too often characters have sex at inappropriate times, especially a character whose woo-woo is sex based, it is refreshing to see characters that have such a good sense of priorities. In this story there could be no alternative - you cannot have people in charge of finding kidnapped children be distracted by sexy times. But this also reflects not just in the romance but also the other character developments between them.

Over the course of the books, Zach and Emma have had a fraught history. Her curse, her justifiable fear of love and the constant threat of Demeter has made their relationship difficult and have left them with a lot of issues and rifts between them. And, as professionals, as capable dedicated adults, they are quite capable of putting aside all this emotional drama to focus on the essential task at hand. I really appreciate that.

Not that that romance didn’t develop – but it did so in, again, a very mature and reasonable fashion. Zach knows Emma is keeping secret from him, he knows it directly impacts on their relationship and he knows it’s dangerous. He also knows that she can’t tell him – and he’s not happy about that, certainly, but he does understand that. He does come to accept that and accept that their relationship can only be on the terms and limits Emma lives under and doesn’t blame that for her.

All of this is delivered by a very fun story, a lot of very well written emotion, some tension and Emma going undercover in a cat suit and with a riding crop in a way that worked well (I’m actually impressed to see how mundane this was presented – not sleazy or even overly fetishised in a way that is meant for me to regard the clients with contempt or overly weird).

I think, as a short story, it did include just a bit too much information about previous books that weren’t directly relevant to this book – short stories have to be careful about irrelevant extra information to avoid bloat or padding.

Inclusionwise, the main local agent they deal with in New York is a Latina woman, as well as her judge aunt (which does smell just a little corrupt) but while she’s quite prominent she was, of course, completely supplanted by the arrival of the main characters. There are some other POC among the agents, they’re very minor characters though we’re in a book with few actual main characters. There were no LGBT characters.

It’s a short story so it doesn’t develop a great deal of forward movement for the metaplot (but it does certainly touch on it) which I actually like – I prefer main meta-plot in the main books in a series while short stories are nice extras – gilding not main structure. It was a fun read that kept all the excellent elements that I really love in this series.