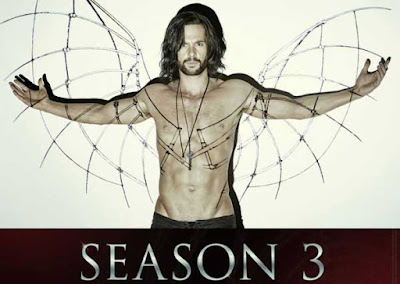 Leo has gone home to Vinci to find his newly discovered sister Sofia and the Leafy Page. And hallucinations. This show always has hallucinations

He also finds Cosmo and several other Labyrinth guys who want to convert him by flogging and torture. This is not a convincing argument. Sophia arrives to the rescue and to tell him that mummy is dead – because this show simply doesn’t have enough angst.

Leo then fights Cosmo and despite his many injuries which left him barely able to stand he does quite well and after much rolling around in the mud, he kills the other man.

There can now be sibling rivalry – and telling Leo that his precious Lucrezia is now imprisoned by her dad, Gedik and the Sons of Mithras. Also he totally doesn’t want to encourage her to be all vengeful but they totally need to murder these people

Together they start to read the page and go on a nature walk while discussing Leo’s many fortune telling hallucinations. And Sofia has Leo’s genius mannerisms – they could bounce off each other well. They use the page and have mutual shiny hallucinations which leads to a shiny shiny invention.

I think they just discovered electricity – or a dangerous Tesla coil.

Riario is still on a guilt trip and has decided to tell the slightly unhinged Lorenzo that he killed Clarice. There are probably easier ways to commit suicide. It’s the battle of the Manpains! Laura pleads for him, throwing around the word “tyrant” a lot, which is amusing when we consider she serves the pope. She goes to try and convince Riario not to throw his life away because Twu Lub while Vanessa tries to tip-toe around Lorenzo’s temper. Which she’s much much better at.

Nico and Zoroaster have managed to teleport all the way (got to love how people can zoom up and down Italy in days in this show) to Wallachia to see Vlad. They’re plan is comically awful “Hi Vlad, please don’t kill us!” It sort of works so we get to enjoy more of Vlad’s awesome decorating style while commenting on how not dead the very very scary man is – given that they killed him before. Of course that means they now have to rely on Vlad forgiving and forgetting that

Vlad doesn’t forgive or forget, even if he hates the Turks. He’s also very inventive and a fan of the Saw films. Thankfully Zoroaster is better at chess and after a few blade games and LOTS AND LOTS of creepiness. Also Vlad totally wanted to join the crusade anyway because he really does hate the Turks – and he has a HUGE amount of special invulnerable armour.

This is the whole episode of sexy men being tormented while shirtless. Riario and Leo’s torment seemed almost fetishised. With bonus mud wrestling.

I may think the whole Vlad storyline ridiculous – but I have to admit the actor playing him is so very very very very creey and does it so excellently well.

I do like that they’ve given Sofia’s Leo’s mannerisms and brilliance – but that would have been fun if she’d been introduced, say, in the last season (rather than the silly detour to South America). They could have bounced off each other with mutual genius joy and been all shiny

Vanessa is.. curious. I expected her to be completely sidelined when Lorenzo came back but she hasn’t been…. But she’s still kind of turned from a powerful woman to a care taker, caregiver and general confidant and support for a man – Lorenzo. I wouldn’t be surprised if they ended up in a relationship.