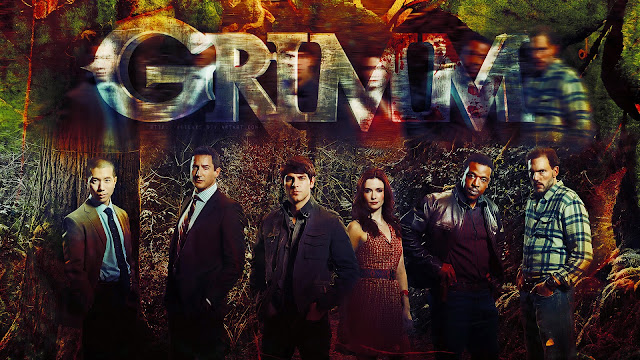 "Awake, arise, or be forever fall'n"

Truble wakes from her bad dream to find Nick holding a crying Kelly, looking down on her.  It's been 25 hours since she was last awake and now, Nick is more than ready to find out what is going on. After months of concern about what happened to Truble, Nick learns that Truble has been working with the people who took her - a group called Hadrian's Wall. Yes, the name is significant. HW has been fighting the global Wesen uprising and Truble has been running around the globe following their orders.  Truble did want to tell Nick but she was barred from doing so, though the group supposedly wants Grimm on their side.  In a quick newsflash, Truble announces that HW knows that Nick is a Grimm, that Adalind used to be a hexenbiest and all about baby Kelly.  It's not big deal though because the group doesn't want Kelly.

HW may not want Adalind or Kelly at this point but they do want Nick.  It is their hope to enlist all of the Grimm to fight the rebelling Wesen. Truble reveals that the agency is large and has Grimm working overseas.  Nick and Truble head to check out her bike and Truble has an emotional moment and hugs Nick.  When is Grimm just going to reveal that these two are brother and sister already? The reunion gets put on hold when Nick gets called into the station.

Renard shoots his commercial for Andrew.  Renard gets all sexy flirty with the camera crew and director.

Truble remains outside working on her bike and is joined by the now passive Adalind, who brings coffee.  They are really making Adalind all sweet and domestic now.  Truble questions Adalind about her feelings giving that she slept with Nick and they are now sharing a bed.  What the ever loving fuck Grimm? Adalind did not sleep with Nick, she raped him.  It is called rape by deception. Geesh. Adalind is quick to deny that they are fucking and says that they are only sharing a bed; however, when it comes to her feelings towards Nick, Adalind is incapable of giving a straight answer. Damn it, I just knew they were going to make Nick and Adalind of all freaking people a couple.  Time for Adalind to turn the tables and so she asks about Juliet.  Truble admits that she came back intentionally to kill Juliet. That's really no surprise because Truble did what Nick would have been unable to do.  Adalind promises not to tell Nick but advises Truble that she needs to spill the beans herself.

At the station, Nick learns from Hank and Wu about a gang raid on three different neighbourhoods. It seems the gangs smashed the windows of business, kidnapped one owner and killed another.  They were all wearing Black shirts.  Did anyone else think that Grimm was invoking kristallnacht?  The cops decide to head to the crime scene and there they discover that Xavier's (the kidnapped man) bakery  has the telltale four claw marks on the wall.  Yep, it's all starting to come together.

At the spice shop, Monroe and Rosealee are watching the news and are in shock.  It seems that they both know Xavier.  Bud shows up in a panic and together they figure out that the attack was not random and that all of the stores were owned by Wesen.  The three then inform Nick, Hank and Wu and add that Wesen attacking Wesen is odd. The cops head over to the Spice Shop where they get a bit of education on Wesen history. It seems that all of the major historical riots are Wesen related.  Rosealee snarks that history keeps repeating itself because people don't know the real history. The one thing they are all pretty sure of is that the four claw marks means that whatever Chavez tried to warn Nick about is well and truly in Portland now.

Wu goes back to question some of the store owners and is stone walled for his trouble.  He does however run into Xavier, who claims to have escaped from his captors.  Wu takes the man to the station and calls Hank and Nick. Xavier claims that he escaped when one of his captors fell asleep.  Really dude? Why is no one questioning his version of events because it sounds too damn convenient to me?  Also, if dude just escaped, why would he go back to his store and not hide someplace?  What we do know is the leader of the gang that took Xavier threatened him and demanded information on Monroe.  We don't quite know what is going on but it's clear that Xavier wouldn't be walking around if he hadn't given up whatever information the rebelling Wesen wanted on Monroe.

Nick places some photos in front of Xavier to identify and Xavier skips over the leader and instead points out Billie.  The cops bring in Billie for a line up but Xavier claims not to recognize anyone.  Nick decides that what Xavier needs is some encouragement, so he calls in Rosealee and Monroe, who swear to Xavier that he can trust Nick with his life because they have repeatedly.  Xavier does a Woge but agrees to identify Billie, so that the cops can interrogate her.

Hank and Nick sit with Billie to have a little chat and she plays it hard, refusing to give the cops any information.  Finally, Hank reveals that Nick is a Grimm and the tough girl routine disappears quickly because Billie is worried that Nick will kill her. They ask Billie to call the leader Dallas Cruz and when she balks again, this time, it's Renard who woges.  That's all it takes for Billie to call Dallas and arrange a meeting at the warehouse. The team decide it's time to go and investigate and Rosealee stays behind to take Xavier home because he is still very shaken up by his experience.

On the way back to Xavier's, he continues to be silent and nervous.  When Xavier learns that Monroe went with the cops, he admits that it was all a big set up. A pissed off Rosealee punches Xavier in the face and pulls over to call the crew to warn them.  At the warehouse when Monroe gets the call, Billie is quick to figure out that the gig is up and runs away screaming that the cops knows.  Quickly finding themselves out manned, the group decides to run and lock themselves in a room.

When Nick hears someone screaming, he decides to leave the safety of the room and investigate. He finds several dead bodies on the ground.  Nick is attacked and nor faring well. His attacker is suddenly thrown to the ceiling.  When Nick looks up, he see a woman with white hair staring back at him. It's Juliet.  Nick calls to her but she takes off running.

First off, in this episode we saw Reneard shoot his commercial to endorse Andrew.  There's no way that this isn't connected somehow, especially considering that Renard is royalty.  I want to see where this is going because thus far this season, Renard has been very disconnected from the meta plot and that simply cannot last. Also, can we please have some shirtless Renard because I am going through withdrawal.

Truble and Adalind sharing girl talk was extremely awkward.  Adalind admits that Meisner saved her and that he was there when she gave birth to Diana.  I still think that we are going to have some awkward relationship thing given that Adalind clearly has feelings for Meisner and Nick (just eww) and that Juliet is clearly not dead. Also, it has to be said, Fuck you Grimm for not recognizing Nick as a rape victim and having him shack up with his rapist. Also a double fuck you for having Adalind express feelings for Nick, as though the whole situation isn't creepy and incredibly wrong.

Speaking of Juliet, the fact that she chose to save Nick makes me wonder if she has left her darkness behind somehow.  Clearly, Juliet was captured by HW, so she could be working for them or somehow have escaped on her own.  The only thing we know is that things are going to get really complex. Truble better come with the truth pretty quick because Nick is going to be hurt if he doesn't find out what is going on from her.

I still feel like we are skirting around the edges with the so-called Wesen uprising.  It's taken six episodes to explain that some Wesen are rebelling and now we know that there's a faction trying to stop them.  We don't know the objectives of either side. I highly suspect we don't know the real reason that HW recruited Truble and want Nick. Something tells me that Truble is in way over her head and simply doesn't know it yet.