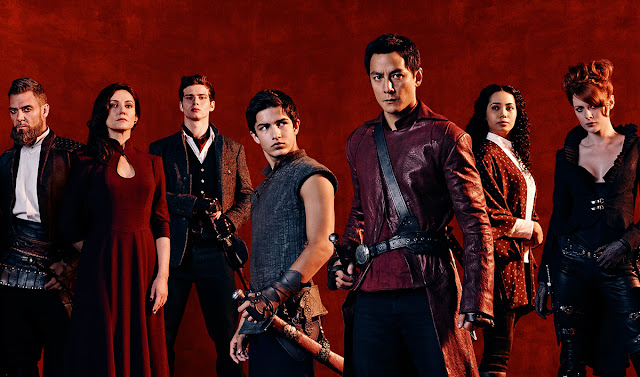 This episode begins with the showdown that we all knew was coming, the fight between the Widow and Quinn. Quinn leads an assault on the Widow's region with Sonny riding shotgun.  As Sonny's Colt, M.K. lines up with the other colts.  Though the colts are warned to remain outside, M.K. seizes the opportunity and sneaks into the Widow's fortress and steals a book with the emblem of Azra on it. Heaven forbid M.K. follow an order.  As Quinn and the widow battle it out, M.K. hides as the Widow's daughters escape the fortress using a secret passageway. M.K. calls out to Tilda and she acknowledges him but keeps moving. Quinn moves in for the kill shot on the Widow but stops and grabs his head when he feels a piercing pain. The Widow moves to turn the tables but Quinn is saved by Sonny.  The Widow then uses the opportunity to escape.

While the battle has been raging, Lydia and Jade sit at Ryder's bedside.  Lydia is clearly not pleased to be so near the Baron's next wife and the tension in the room is fierce.  Jade explains that she is there because Ryder is going to be her family soon but Lydia is not buying it in the least.  Jade is clearly playing the long game and does not yet trust Lydia enough to admit that while she is due to marry Quinn, the man she really loves is Ryder.  Lydia makes a point of telling Jade that she is nothing more than a distraction to feed Quinn's ego.  Jade tries to claim that she is not the enemy and points out that since she has been inside the house since she was a girl, she understands more than Lydia realises. Lydia makes it clear that the Baron's house is a battlefield because Quinn loves to fight and asks Jade to leave so that she can be with Ryder in private.

Before Jade can comply, they are informed that Quinn is leading the Clippers back from battle. Outside, M.K. gives Sonny the book and says that he cannot read it.  Sonny is not impressed that M.K. went into the house and orders him to follow.

A bruised and bloodied Quinn enters the house and Lydia does not exactly give him the conquering heroes welcome.  Lydia makes a point of mentioning that the last war brought shortages and death but Quinn is more interested in keeping his reputation in tack.  Lydia then brings up Ryder's health but Quinn isn't interested in seeing his only son and instead takes Jade into the next room for a booty call.  On every level, Quinn is a disgusting power hungry man.

Quinn may not care about Ryder and Lydia may not want her intervention but Jade cares enough about Ryder to go and see Veil and ask for help. This is a tall order given that Veil's parents were just killed by Quinn for daring to inform him that he is dying.  Jade plays upon the fact that she and Veil are life long friends and are both negotiating situations beyond their control. Veil calls Jade out on being in the big house.  Yeah, I'm not like the antebellum slave analogy with this one at all.

Veil makes her way to the big house and wants to alleviate the pressure on Ryder's brain but is initially stopped by Lydia, until Lydia learns that without the procedure, Ryder will be dead by nightfall. Proving that no good deed goes unpunished, Quinn then confronts Veil about the fact that she is Sonny's girl.  I guess there isn't much that this man misses.

After treatment, Ryder awakes and reveals that he was set up by a "doll" (read: prostitute) named Angelica at the Tick Tock Clock. Quinn sends Sonny to investigate the incident.  Sonny takes M.K. with him and orders him to wait on the balcony. M.K., always the contrarian, decides to wait on the ground.  Sonny and Angelica start to battle as on the ground, M.K. talks with Tilda about what is going on.  Tilda is convinced that M.K.'s story does not add up.  Angelica falls to her death rather than revealing the Widow's location to Sonny and M.K. tells Tilda to run away quickly.


Back at the compound, Sonny has M.K. balance on a ledge but M.K. is upset because he feels that he is not being trained how to fight.  Cue Sonny having a deep moment and going all Miyagi about there being more to training than learning how to fight.  Sonny decides to take M.K. to see the former Regent Waldo, who is in a wheelchair.  Waldo challenges M.K. to a fight and M.K. balks because of Waldo's disability.  Waldo ends up kicking M.K.'s ass and warns M.K. that under estimating people will get him killed.

Sonny takes M.K. to Veil's because he needs to get stitches after the fight with Angelica. M.K. learns that Veil can read and naturally this puts ideas in his head. Clearly, M.K. didn't learn anything from his little battle with Waldo.

Back at the compound, Ryder is now sitting up in bed after defeating his little brush with death. Lydia takes the time to confront Ryder about attacking the Widow against Quinn's express wishes. Lydia has decided that Quinn is right and that he cannot think for himself and is not worthy of being the next Baron.  Mmmm, things are about to get real.  Lydia says that she would rather have Ryder never speak to her again than to mourn at his funeral.  This is enough to almost make me feel sorry for Ryder, both of his parents are nasty people.

Sonny heads to see Quinn, who reveals that he got an invitation to parlay with the other Barons. Quinn is certain that this will be an ambush in repayment for his invasion of the Widow's territory. Apparently, the Badlands have been at peace for five years and the other Barons are not anxious to fight another war.  Quinn decides to send Sonny to speak with his former lover Zephyr, who happens to be a Regent for another Baron.

Sonny rides out to meet with with Zephyr, and they play a little bit of cat and mouse.  Zephyr suggests that the problem would be solved if Sonny would just clip Quinn and take over his territory. Zephyr believes that the other Barons would throw their support behind Sonny; however, Sonny says that he has no intention of killing Quinn. If you think about it, considering that Quinn will be dead soon, there's really no need.  Zephyr reveals that she will try and set up a meeting with Jacoby, who I assume is another Baron.

M.K. has used Sonny's absence to steal the book and visit Veil to find out if she can read it.  Veil feeds M.K. the meal she prepared and flips through the book but discovers it's in a language she cannot read. Quinn shows up and M.K. is forced to hide.  Quinn goes through his menacing routine just to remind Veil whom she is dealing with.  It turns out that Quinn has an agenda for his visit. After seeing the way in which Veil healed Ryder, Quinn wants to know if Veil can do the same for him.

Despite the fact that I love all of the glorious fight scenes and Daniel Wu is hot as hell, this story continues to feel rather generic.  There's nothing unique about these characters or their motivations. At times it really feels as though I am watching a B movie.

Sonny is clearly playing the long game in terms of Quinn. It makes perfect sense to try and wait it out since Quinn is facing a death sentence with his tumor.  In fact, if I were Sonny, I probably would have let the Widow kill him in the fight and taken off.  Why the hell did Sonny protect Quinn?

M.K. continues to be like an annoying puppy in need of house training but I suppose that is exactly who he is meant to be.  At this point however, I think they need to get to an explanation as to why M.K. goes all angry killer dude when he bleeds.  I get that Azra is a mystery but how it is connected to M.K.'s powers is not clear, particularly given that M.K. left there in the hopes of getting a cure.

The women in this series are clearly playing their own game. We have Jade facing off against Lydia and Veil not at all pleased with Jade living in the big house.  Then there's the Widow and her matriarchy and quest to take Quinn out.  Each of them is playing the power hand that they have been dealt.  I do however want to know why exactly the Widow is determined to take out Quinn, especially given that it means breaking the peace.

As for Quinn, it's clear that he has a death grip on his power and is going to go down fighting.  He wants everyone to know that he is the boss and that his word is law.  He had sex with Jade to prove that she is his possession because she was sitting next to Ryder and to remind Lydia of how little concern he has for her feelings.  It's a wonder when you think of it that someone from his own house hasn't taken him out yet.

I absolutely loved M.K.'s fight scene with Waldo.  It would have been easy to simply turn Waldo into an adviser for Sonny, given Waldo's disability but having Waldo fight M.K., served the purpose of showing how skilled one can be even with a disability. It's not often that one gets to see a character with a disability perform in a badass manner and I totally loved it.  This is absolutely a win for Into the Badlands as far as I am concerned.

At this point, we are halfway through the season.  Into the Badlands has thrown a few balls into the air and is busy juggling them.  It's absolutely beautiful to watch and the choreography of the fighting scenes are brilliant; however, I cannot shake the feeling that something is missing.