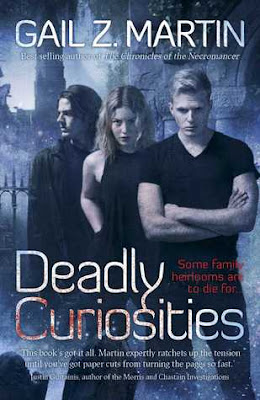 Cassidy runs a little antique/pawn shop in Charleston – but few of her patrons know her true job: finding cursed, haunted or otherwise dangerous magical items and taking them off the market. It’s a mission her family has had for a long time, aided and guided by the vampire, Sorren and her employee Teag

With a job description like that, the weird and the odd are pretty much bread and butter. But when some perfectly normal (or, at least, not too harmful) artefacts start to become suddenly dangerous and haunted, there’s clearly something new in the city. Something dangerous. And who else is going to clean it up before worse follows?

This book has a fun concept. A family running a pawn/antique shop whose role is to find dangerous magical artefacts and take them out of circulation. It’s a very fun idea and it really works with Cassidy, the main character, psychometry. Being able to read objects is a perfect fix. I also quite like how they’ve managed to make that useful ability a powerful, dangerous one (albeit a little convenient, story-wise, since it allows her to pull any kind of magical mcguffin she needs) with some really nice ways of working

One of the common tropes I’ve found with magical female protagonists, if they’re not an outright kick arse combat monster weapon, they tend to have magical abilities which are more utility based than battle based. Either they’re all powerful combat gods, or useful tools and rely on other people to protect and fight for them (and, frequently, rescue them over and over).  So a character who is both capable of fighting and protecting herself without being the toughest most dangerous weapon evah with awesome killy powers. I appreciate that balance

I also like the world building – groups of people, supernaturals (including a vampire) trying to stop all kinds of supernatural chaos and carnage being unleashed and, inevitably, the big baddy group of selfish power hungry individuals who are naturally wanting to do nasty naughty things. What I like about these very very standard elements is the lack of organisation. The ad hoc, loose collection of both entities rather than some grand secret society that we so often see. It feels… more real to me.

The world and the concept is excellent.

All of it comes with a lot of fun action, excellent battles and nice capability from everyone. All the characters bounce off each other very well - Cassidy and Sorren and Teag and                          they work as an excellent team. I really like their story and would happily see them in more shenanigans in future.

So why didn’t I love this book? Because it feels… flabby. Flabby and slow, terribly slow and it feels like it drags for a long time. The whole pacing of the book feels off. Part of this is how the mystery is revealed

About the middle of the book we pretty much learn, well, everything. Even in the beginning we learn a fair amount pretty quickly. We learn that there’s a demon doing scary things which is leading to lots of ghostly shenanigans. We learn pretty quickly about the big dark scary demon summoners both past and present, we get an idea of what is happening and where and how it’s all connected really quickly. The location, the smuggled demonic artefacts, the general shenanigans caused by dark magic, shadow people and angry ghosts – we learn it all really quickly.

But they keep investigating. For the first half of this book that’s excellent, there’s action and mystery and investigation and answers and a lot of nifty fight scenes and we get to see a little of all the characters. Which is great. But then we do it all again. They keep asking questions they seem to have the answers to, they seem to keep investigating long after they already have all the answers – but they keep researching over and over. I suppose we can put it down to confirming the hypothesis, but given we have chaos and an unleashed serial killer a little urgency would be quite nice.

In addition to Cassidy (who, as I’ve said, is an interestingly different protagonist) we only have one other major female character (though we do have some background characters who do have some sense of personality and presence but are not major participants even if it is hinted they are aware of the supernatural and Cassidy’s mission. It is a very male ). She is Lucinda, a Black woman and, unfortunately, she is very much all about the woo-woo. There is a major point that she’s educated and skilled and a professor who has a sterling reputation. But it’s all about the woo-woo. She’s educated in magical transitions, she’s a voudoun and all of her resources, power and activity in the book pretty much revolves around said woo-woo

It would help if there were a clear POC in the book who wasn’t all about the woo-woo- but even minor Black characters (Cecelia, Niella and her daughter) are also sources of woo-woo and little else. They’re definitely all extremely powerful and skillfull and mighty – but I would like another dimension to them beyond that. There are some other minor POC – but largely flashbacks and restaurant owners

I don’t know whether Teag is a POC. I think he probably isn’t – but this book often doesn’t describe POC’s skin tone leaving a lot of it somewhat… wooly. He is a gay character with a boyfriend and it is actually really well done. He manages to dodge just about every cliché and trope and he brings enough of his own storyline, motivations and involvement in the plot to be an excellent secondary character. He’s fully involved in the story and his own abilities which definitely add to the storyline which are essential to make the plot move forewards. He isn’t an extra, he isn’t an aside he isn’t a joke or a token.

This book has vast potential. It can really be an excellent book and an excellent series. It has an excellent world setting, original and interesting – it has an excellent concept and some great characters who really balance well together and have great potential to be developed into fascinating, wonderful people. I just really hope it’s cleaned up more, with less repetition. It’s an excellent story – it just needs to get to the point a whole lot sooner.