Lost Girl, Season 5, Episode 9: 44 Minutes to Save the World 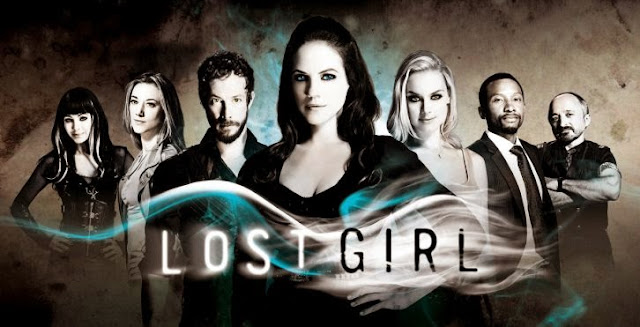 So after the midseason finale (which lasted a bit longer for Fangs because we totally forgot it was coming back – I blame Renee) Bo had just opened the big bad box of daddy issues (said daddy issues being hurriedly manufactured because Lost Girl has never been great at keeping people’s motivations reasonable and stable) to try and save herself from Nyx (I’ve read the House of Night series I can understand this). Even Zeus was all “oh hell no” about dealing with this angst (or possibly afraid of Bo’s daddy, one of the two). Alas Zeus was stopped by the impossible barrier of a flimsy wooden door.

She uses the music box and unleashes a terrible evil – a door to door evangelist talking about the end of the world. Well that was an anti-climax.

Hades was released, he just decided to go join Lauren and Dyson who are all despairing over Mark the Pointless who has just been stabbed by Iris/Nyx. With his help, alas, he lives.

Everyone is all happy about this (silly silly people) and it’s even all family reunion before Bo turns up and tells them the nice guy is her dad and she super duper hates him because Daddy Issues (actually she blames him for Kenzi’s death. Which… may be true because does anyone have any damn clue what happened in that train wreck of a season). With Mark alive they can jog his memory to find out where Iris/Nyx has gone

We get a bit of elegant recapping with various characters explaining exactly what the stakes are. Turns out Zeus and Hera put Nyx (the dark end of all things) into her daughter Iris to use to destroy the world for her own purpose. And yes, Nyx is going to destroy the world by growing and destroying everything (except those marked by Hades – like Bo and Mark – because Hades is just all that). Clearly they need to stop her, preferably without killing Iris (who was just used and abused) or Cicely (the human woman being possessed by Iris). Like that’s going to happen.

Unlike the Light Fae who aren’t – with both a random High Fae with a super staff and even Trick with his special blood writing cannot match the Ancients.

Bo and Hades wander around with a whole lot of resentful daddy issues and tantrums with Bo repeatedly rewriting her history (she know what it’s like to be used by her parents? What? She barely knew her parents for most of her life. Since when? Oh Lost Girl and their endless retconning)

Eventually they catch up with Iris who is super scary – except in the hands of Hades who, again, is just all that. With Iris pinned and minutes before the world ends Bo has once chance to save them all – she uses the box Hades was imprisoned in to capture Nyx. That saves the world – but also kills Iris and Cicely. Well, I called that one – wish I didn’t – but it was almost inevitable as soon as a recurring Black character appeared.

During all his Tamsin has been captured by the Ancients – which sounds like a plan but Hera is so emotional and she and Zeus spend so much time bickering and hating that it all falls apart with just a few chosen words from Tamsin. In the fallout, Zeus ends up zapping Hera into a coma and Tamsin is released to be stormy and stompy (and leave some nice emotional barbs with Zeus as well).

Of course, it is tempting to kill a helpless Ancient but they belatedly remember the human she’s possessing. Which is also Alicia’s husband (who is the woman hanging around Dyson and probably going to be all romantic for the sake of MOAR ANGST)

Also Lauren is working on some kind of immortality medicine so she can stay with Bo throughout her long, fae life. This may be why she plays in traffic (really doctor, that’s not healthy) and, when she’s hit by a car, she does the whole Succubus chi-sucking thing

Bo and Hades continue to have monumental daddy issues. He desperately tries to explain why he has been a terrible villain all along even though he loves her, honest. I feel for the guy, he’s trying to explain the plot holes of Lost Girl which no-one should have to suffer.