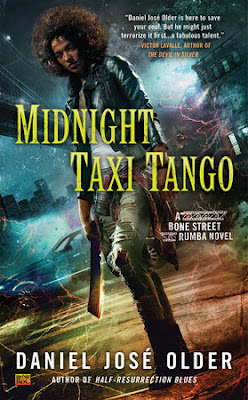 Carlos has been trying to track a series of disasters that have been hitting a park. It looks like ghostly influence that needs dealing with and, as an agent of the Council, that’s definitely his job.

But this job hits very close to home as it involves some of the people close to him – including Kia and Sasha – now mother to his children. He uncovers a terrifying and alien cult that brings several disparate people together to save or avenge their loved ones and put an end to this terrifying force

The whole concept and world setting of this book is fun, interesting and new. The enemy, the nature of it and its beliefs (which I really liked because it pointed to a very well thought out system) were all excellent. The research to get there was really clumsy and slow, but the characters and their individual involvement was excellent. How the plot lines all came together was fun and perfectly brought together every loose end – though until they all come together and all the loose ends are explained it’s kind of frustrating and annoying.

Like with the previous book, I’m not a huge fan of the voice in this book – I don’t like it, find it hard to follow but at the same time do think it adds to the setting and characterisation, which is good. In the last book I found the voice a little… dated (which wouldn’t entirely be inaccurate because, after all, who knows when Carlos was actually alive since he can’t remember his past?). This book changes that which in some ways works better as it flows more – but at the same time it makes the language of the previous book even more glaring. It’s like a subtle retcon.

I also found this book jarring. We have a huge number of characters running around now (all of Reza’s team, all of Carlos’s group, Riley’s ghosts, Kia’s friends, the Survivors and some people from… somewhere but I honestly have no freaking clue where) which is damn consuming, especially since they’re not all very distinct. I’ve confused Riga and Rohan more than a few times and sometimes another character has appeared and I’ve no clue who they are where they’re from or what they’re doing.

On top of this, especially in the beginning of the book we have not just several POV switches (I mean, I can get behind Kia and Carlos and Reza POV – but we had to have POV for a completely unrelated ambulance driver with a Jamaican-Russian-accent-because-head-injury as well?) but also several tense switches from Kia as well as she swooped back into her past without a whole lot of notice that we HAD swooped into the past (let alone why) to say nothing of her frequent diving into song lyrics. It is not an easy book to follow

In addition, for much of the beginning of the book, these three POV characters don’t have a great deal of relevant intersection – which left me wondering whose story am I actually following here and why (especially in Reza’s case because here was a completely brand new character dropped in from nowhere and I’m now following her around? Nice and all, but why?). Kia is following her own teenaged drama and being awesome while doing it. Carlos is moping after Sasha (and being damn annoying while doing it) while Reza is leering at women while pining over her lost love and being an enforcer for a prostitution ring (Reza’s introduction is pretty awful). It’s a while before these storylines randomly crash together.

So, writing wise, this book was a struggle. It took a lot of work to follow

I did like Kia’s point of view, it did a lot to really help overturn the poor depiction of women that was a problem in the last book. Now we have a woman who is capable, intelligent, strong, determined, driven very much in tune with her own mind and what she wants. She’s also very human and very real – yes, she doesn’t always make good choices (like getting really really emotional or angry or otherwise silly – because that’s what people are like), she’s not always perfect. She has a bad temper, she gets inpatient and frustrated and passionate and us generally flawed in very human ways. I like her a lot – she’s an excellent character because she is so rounded.

I also really liked Reza who not only also added to this book’s female inclusion, but is also a lesbian and an excellent kick arse, well dressed character. Her introduction makes it very clear she’s a lesbian and doesn’t try to downplay her sexuality – but it’s also clumsy enough as to make her seem pretty predatory which isn’t exactly well done. It’s overdone and to have a woman, recently bereaved from the loss of her beloved, be drooling over another pretty young thing the very first moment we meet her is just not a great introduction. But from there we see a lot more of her – her lethality, her professionalism even when she’s grieving deeply. She’s ruthless, but still cares; she has little time for rules, but still has an unyielding moral compass that drivers and informs her character. In other words, like Kia, she’s complex, well rounded, flawed but interesting. I liked her.

I did not even remotely like Carlos’s story. Like the last book he’s almost entirely focused on Sasha – only now it’s love interest Sasha and his precious little babies. Occasionally we have a drop in to worry about Kia, but otherwise it’s the same obsession. The bonus is that, with the other protagonists, there’s a whole lot less focus on this obsession, but it also really draws attention to how little I care about Carlos or enjoy his POV. Really so much of this book is Carlos about to charge madly into danger without the slightest thought, only to be stopped by one of the characters with an ounce of sense. Over and over, he just tends to follow people and be emotional.

This book, like the previous book, is full of POC, specifically Black and Latino. Reza and Carlos are both Latino, Kia is Black and the vast majority of the side characters are also Black and Latino. But, let the first book, there’s also a real effort to include different ethnicities as well as just racial categorisation – a character isn’t always just Latino, they are often also labelled as Puerto Rican or Brazilian for example. There’s more cultural information (including an excellent discussion of capoeira) and some really good discourse quite smoothly include in the book like Kia objecting to carrying a weapon because she’s Black and knows it can get her shot by police, or the acknowledgment of which neighbourhoods are likely to have a rapid police response (and I only say “quite” smoothly not because it’s inserted clumsily but because of the aforementioned tense/pov/voice shifting that made none of this writing smooth).

Reza is an awesome lesbian character (despite her beginnings) and she meets a bisexual librarian who is also awesome (they’re also older – in their 50s and 60s which is very rare for depictions of LGBT people), this is a definite step up from the exist-to-serve minor depictions of the first book (and Baba Eddie is no better in this book, having an even smaller role). We don’t really have an improvement of gay male characters, though, beginning with some unnecessary homophobia in the beginning of the book (authors, please stop putting homophobia in the mouths of gay characters like that makes it ok) and we have Gio introduced as another gay male character – but he isn’t much of a character. He pretty much exists to be an emotional tool for Kia – he’s there for her to be angry about, he’s there for her to be sad. He’s there to be a facilitator for her emotions – he doesn’t have any real independent existence beyond that. He’s an add-on to a straight woman’s emotional development, growth and pain.

This leaves me loving the story and the world setting and its excellent originality and really liking some of the characters. It leaves me loving the diversity. It leaves me admiring. And it leaves me really not liking the writing style or how this book was put together. It didn’t feel ordered or structured, it felt like everything was kind of mooshed together and disjointed and confusing and general not flowing. The frame of the book – the characters, the concept, the story are good – but how it’s all been assembled is really clumsy and really hard work to read which is a real shame. If it were just put together better, if it wasn’t so much work to actually read that really took the fun out of it.