This needs to start with a little recap – Ravi is desperate to find the cure for zombieness, not just for the sake of Liv, but because the last cure they used is apparently temporary: not only that, but this episode now points to the cure not only being temporary, but the “cured” rat also died

This is bad news for Major and Blaine. And Major is far too pretty to die – and Blaine far too funny (sorry, I know I should hate him and I kind of do but he is kind of a magnificent bastard).

To make more cure, Ravi needs a stock of tainted Utopian (a drug that Stacey Boss, the crime lord, is selling – a business that Blaine is trying to muscle in on) and they know there is some out there in the body of 2 drug mules who have been buried somewhere in a very large field. So far they’re not having great luck

But this episode they finally find a body! Yay! Except it’s the wrong one. Well shit. This means they get a police investigation, Clive and excuses that cause Clive to be super-duper mean to Ravi and cause him to make this face. 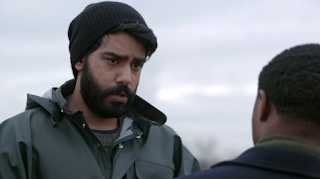 Awwww…. Ravi is too cute to die.

While Liv snacks on the brain and discovers that the body is a compulsive liar (which is kind of a lacklustre brain this week – but I think this week and last week have both been far more about the meta and they haven’t wanted to be too distracted by the brains) they do realise that, since it isn’t a graveyard, the chances of this many bodies in one field is just a little…. Too much. They conclude the field is used as a convenient dumping ground for bodies by one of Stacey Boss’s killer lackies.

Which calls for visions, investigations and more unpleasant reveals – Liv not only learns and shares that Blaine is muscling in on Stacey Boss’s trade, but also her new boyfriend Drake is definitely involved. Drake was shot on that field, Drake’s current co-worker Donny did the shooting. And as the investigation continues, the chief suspect disappears, apparently to Mexico (after a violent altercation with Drake the night before, I guess there’s another body put there)

I think this is supposed to be a super revelation but I’m not sure I buy it. I mean, she knows Drake is a zombie working for Blaine and that Blaine is involved in so many bad things and turned people into zombies because it was useful to him… it should have been suspected somewhat, I think.

More twists – Blaine learns that Major is the Chaos Killer and therefore the one killing off his competition. Blaine is not amused (though highly amusing) and he’s quick to get in on the blackmail game to try and use Major. He wants two things – one for Major to target zombies he wants dead (well, drugged, frozen and hidden which is what Major is doing) – and for Major to return his father

See, daddy is presumed dead so it’s time for his will to be read. But it turns out this abusive, evil man has left all his money to Blaine’s former maid (an abusive, evil woman which goes a long way to explain why Blaine hates his father so much) if he should die in suspicious circumstances. Well, looks like daddy did know his son very well after all!

So Blaine gets his daddy back and, after a fun moment of pretending 50 years have gone by, he has his minions torture him to Les Miserables.

Y’know, he’s evil but he really is awesome in his evil.

An interesting side point – Blaine sells brains to zombies and if you can afford it you get awesome brains. If you can’t afford it? Holocaust survivor and hypochondriac brains. It’s an interesting point to have a pay scale of brains, we’ve seen horrors and windows through the window of various brains and here’s one implication of it. Blaine doesn’t just control whether you get to eat or not – he gets to control whether you have an amazing time or are tortured by horrific, traumatic visions… It’s a terrifying amount of power

Blaine and Major together also attracted Clive and Dale’s notice which is going to lead to uncomfortable places. Clive is also finally realising that Liv’s personality changes with every case – so far he’s putting it down to a psychic thing…

And I have to praise the banter between the cast as well – it’s almost as good as Blaine’s witticisms which are just hilarious.