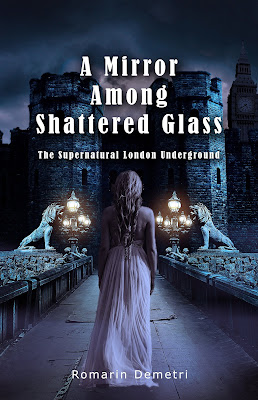 Ok, this book took a lot of chewing for me – there were several things I didn’t like and failed to carry me, mainly the story. Or the jumbled mess that tried to be a story, anyway.

Let’s have a look at the actual book blurb:

Unable to contain the deadly nature of her family secret and powers, nine-teen year old Romarin Demetri hails from California, U.S.A, to unearth her heritage as a descendant of serial-killer, Countess Bathory, the woman that lent Dracula his legend, and cursed Romarin with an appetite for blood.

Unenthusiastic about relocating to her birth city of London, a charming paranormal investigator with claim to the throne could change her mind, as he leads her to the only living and distant relative she has: a raven-haired recluse named Talia, who has taken refuge in an old castle in the heart of the city, and doesn’t seem to have a heart of her own.

After a rough introduction to the lethal, inappropriate, and enchantingly sarcastic people she calls her housemates, perhaps the other misfits will be her first true friends; However, as much as these people are like her, they still have hidden vendettas, a taste for revenge, and will struggle between what is just, and what will settle their psychological upheaval. There is only one way for Romarin to become part of the Supernatural London Underground: Can she be the one who challenges them to put down their ghosts and demons and make their world together?

That book? That book sounds interesting. That book I’ve be curious to read. That book description pulled me in. That book is, however, not all that relevant to the book I actually read.

Take that hidden vendettas and taste for revenge and Romarin being the one to make them all get over it? Not there. I mean, in theory we here that many of the characters were once experimented on by some kind of laboratory. But that’s pretty much all we see of it. No-one appears to be plotting elaborate revenge, at least not that we were shown. Oh they’re not happy with the past, but they’re hardly clinging to any of the ghosts or plotting endless vengeance. Kit seems to be more concerned with her own possession. Travis seems to be more concerned with… actually I have no idea what Travis is concerned with. Audin seems, again, to be pretty unfocused and not having any real goals except we learn her has a past which is catching up with him, but that’s nothing to do with the lab or his history. And Talia heartless? Literally the only thing I know about Talia is her endless grieving and sadness for a man who was in the lab with her. Oh and developing a deep connection with Romarin, enough to let her move in, because of their shared Barthory bloodline. That’s not a heartless person, that’s someone whose literally every decision has been made for emotional reasons.

And Romarin, our protagonist has no real place in any of their stories, let alone helping them let go of their demons. She serves as audience to each of their issues… but doesn’t really do anything about any of them. Similarly no-one actually does anything about each other’s either. We all learn about Kitt’s possession issues… but nothing happens about it. Audin has this changeling thing going on but we don’t do anything with it. Talia is sad… and she’s sad. Travis is running around doing random odd things – but none of this actually goes anywhere. We have all these little story bits but none of them actually turning into anything resembling a story.

Then there’s Romarin herself – and sometimes I think I’ve missed huge chunks of her story. For a time she bemoans her terrible fate and she hopes Talia can find a cure… but where is this terribleness? I mean she had the Atrocity on the Beach incident which she talks about regularly but that atrocity was her pushing a man trying to sexually assault her and he hit his head on a rock. This doesn’t seem to have anything to do with her actual Barthory-ness. She gets odd images and impressions from the blood she drinks but, again, this doesn’t seem to be a huge disadvantage or even something she complains about an awful lot except the time it gives her amnesia. But that only happened because she drank lots of blood from a suicide that dropped right in front of her… which I can’t imagine is that common an occurrence (and gave her a lot of useful knowledge besides). I’m not saying her bathoryness couldn’t be a curse, but like all the little plotlets, it needs some development beyond Romarin declaring it to be terribad awful. Show, don’t just tell. On top of that we have the bemusing instance where she decides she can throw herself out of a window if she has blood in her because she has superhuman abilities when she does. Apparently. This is the first we hear about it – and apparently half way through her amnesia incident.

Which is also a bit shaky – she forgets who she is and then gets her memory back –but I don’t even know when it came back. She just suddenly remembers things

This is the whole problem with the plot – it’s fragmented, unfocused and nothing develops. She arrives in the UK then has her amnesia moment. Then that goes away and she moves in with Talia which has all the stress of an introduction. Then we have a bizarre fake ball they throw to convince her parents she has gone to charm school for… reasons. In which we are told repeatedly that Romarin’s mother is the worst ever but never actually really see any behaviour to back that up so Romarin just looks like a really terrible person instead. Then we have all the other characters’ little moments, several visits to the bars and then general attempts to depict Britain despite what feels like a limited knowledge of the country.

Starting with the title of the series – The Supernatural London Underground. Oh gods I expected so much! Cthulu on the circle line! Ghosts haunting Kings Cross! A beleaguered team of work weary mortals trying to stop the horrors that lurk in the depths from disrupting public transport. Oh that would have been so much fun!

I can’t imagine titling a series “London Underground” and NOT expecting it to be about the tube!

And then there’s another random storyline – Romarin runs into Fred, love interest and, surprisingly, the second in line to the English throne (who would probably be Duke of York or similar title rather than introducing themselves as “second in line” but, again, there doesn’t seem to be a huge amount of knowledge of England here). She just runs into the prince at complete random… apparently in a library in the middle of the night doing school work (he goes to university – which he calls college. And no, he doesn’t mention which London university he’s attending that requires him to do his work in public libraries). She doesn’t recognise him – despite having absorbed the mind of a 40 year old Londoner. He has no entourage, no security – oh and he invites her to spend the night at Buckingham Palace without knowing her surname or her passing any security checks at all. He also wants to be a teacher. Seriously. And I don’t mean in an angsty “I want to be a teacher but my position will never allow me to have such a mundane profession” but as in this is a legitimately likely and non-controversial career choice for him.

They also manage to drive for an hour from London and arrive at a remote beach that apparently looks out onto the ocean.

She considers a relationship with him without any attempt to depict all the ramifications of a royal relationship. And then the first in line to the thrown (Prince of Wales) drops in to be another potential love interest. Who is this woman who randomly attracts princes? What is the point of this ridiculously simplistic fairy tale thrown into the middle of a book that already has minimal actual development?

We also have a rather dubious take on how English people speak: either indistinguishable from Americans or full on Dick Van Spike.

The writing itself is often… confused and bemusing. Someone is described as “spitefully muscular” and we have paintings of women with sad expressions leering at her – how does a sad expression leer? On discovering vampires are real, Romrin “rejoices” for some reason.

Throw in, I think, 1 random POC vampire (love interest #3 of course), no LGBTQ people and no disabled people (albeit, with some actual development parallels with the various experimented on supernaturals could be possible… with a lot more development. Like everything else in the book) and diversity isn’t a strong point either. And Travis is called a Luison – a being of South American mythology that bears absolutely no resemblance at all to Travis. Why use the word if you’re not going to use the mythology?

All in all, this book needed to be less unfocused. It should have introduced one story (like the development of Romarin) and run with it, giving us more background and focus and letting the other storylines sit for future books. It didn’t need the dubious royals at all, why even throw that in? It needed to get one storyline told and have everything else plant minor hooks for us to catch up on later – as it is nothing has really been examined in enough depth and everything feels shallow, distracted and kind of lost. I nearly DNA’d the book several times and if it wasn’t as short as it is, I would have.