Dyre: A Knight of Spirit and Shadows (Dyre Series #2) by Rachel E. Bailey 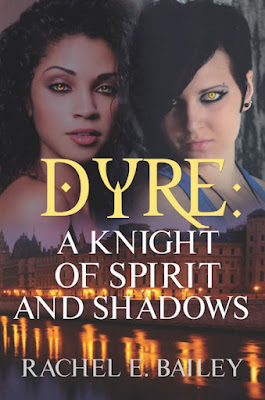 Ruby the new Dyre of North America, has been kidnapped – and only Des and Thierry, the people who love her, can try and get her back

She’s been taken to Europe, and must choose between a possible escape from the legacy she never asked for – or loyalty to the new family and people she has found.

I do feel like this book pulled out of a lot of woo-woo all of a sudden without a whole lot of weight or depth behind it. And since that woo-woo was convenient for the plot it felt a little flat to me. Like “how will I find Ruby?!” “Oh I’m psychic now! That’s conveniently useful!”

No, it’s not that convolutedly written, not at all. But it doesn’t change the convenience of it – a convenience that is often repeated. The characters don’t know what to do? That’s ok, a dead person is going to haunt them and give them step by step instructions on how to solve this problem. And it works. It also introduces more supernatural woo-woo that everyone just kind of swallows and it all works wonderfully with minimal difficulties. It’s just so easy. It just has all the answers spoon-fed to them by some convenient woo-woo

This is exacerbated by them not even exploring the supernatural woo-woo being handed to them. Like the idea that geas-bound have woo-woo… ok can we explore that? Why? What goes into the process? Where does the power come from? What’s the history here? Or the fact that every time Des has a vision she also bleeds from her ears and nose! Every time she has a vision she has a cranial bleed! She is literally having grand mal seizures, she is having strokes. She is literally asking people to punch her unconscious to help Rose through visions! What Urban Fantasy or Paranormal Romance book doesn’t LEAP on the angst potential of this! She’s risking death and brain damage for the sake of the woman she loves! Where’s the angst? Where’s the wailing? Where’s the guilt and martyrdom and nobility and overwrought emotions?! How can this just be a thing? Or there’s the supernatural afterlife that is revealed. How can the tangible proof of their afterlife not be powerful and world changing and immense?

But even after the fighting no-one seems willing to investigate the vast implications that has just happened? They just have sex and try to avoid Interpol (who is involved… why? I mean they’re suspected of murder in Greece? Does Greece not have police? The police of the world isn’t split between US police and Interpol). There’s no examination of what they’ve been through

This shallowness just keeps happening. Take the big bad guy – willing to kidnap, possibly start a war, rape and murder to take over the American Packs… for… what? Because they don’t follow the same traditions? Evelyn is willing to tolerate her father’s own murder and the kidnap and rape of a woman she obviously respects and is disturbed by – for… what? I mean they’re living by the traditions they value so much, there’s no indication of the US traditions spreading, there’s no talk of pro-democracy rallies or uprisings spreading to Europe. No indication of the wrath-of-woo-woo or any reason why the Dyre of Europe should give even the slightest shit about what happens across the Atlantic? I’m not saying there’s no way he would care – but explain! Explain to me why this matters? Explain to me why there’s no political ramifications over him effectively launching a coup against another territory? We’ve been told about several African Dyres and the Dyre of South America… explore this! Explore the consequences of this, the politics of this, the world building of this!?

EXPLORE THIS WORLD! I loved the first book in part because of the well developed characters, the excellently made world, the intriguing introduction, the hints of politics and the growing relationships between the characters

And this book ran screaming from all of that. We had Des and Rose being cute together (and overtly sexual) but not really any particular development of the relationship. The one of the old characters who came across with the was killed off and generally played such a small role I actually forgot who he was. It’s just kind of sad – because if there was a plot to back the world, the writing and the characters then this series would be utterly awesome.

I have to praise the writing that almost, almost managed to pass all this off. Almost. It’s a shame that the great writing, these intriguing characters and the world that was introduced was excellent. Sure the first book was light on plot – but everything else in that book was awesome. And in this book we have a plot… but… it’s not a great plot and it doesn’t really make up for losing everything else.

It does maintain it’s excellent diversity. Ruby and Des are both WOC and in a loving relationship: Ruby is bisexual, and Des is either bisexual or a lesbian. We have some background gay male characters (they don’t have a lot of involvement and it’s a little dubious to have him so invested in their storyline on the basis of very little). It is an excellently diverse series

I look to the third book now and hope we can pull up – there’s a lot of awesome here, there’s even a lot of good in the writing and characters to pull back from a plot line I found lacking. So now I hope that we can hold on to the awesome and head back to greater heights