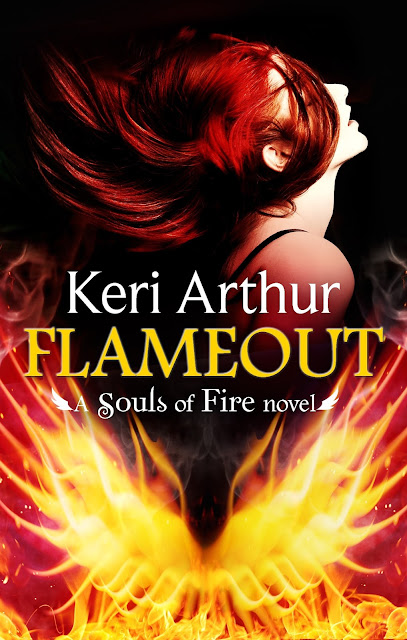 Emberly and Jackson are still desperately struggling to find some answer to the Red Vampire Plague. Unfortunately, the notes that may have the cure are nowhere to be found and many factions are gathering around to use them, threaten them or worse

And her big secret is out – far too many people know she’s a phoenix, and have magic to counter her fire.

I love the whole concept of the phoenixes in this series. I love their fire, how their immortality is presented, the awareness of their age and their require companionship. I like the tragedy of them which their cursed romantic existence brings – because it isn’t overwrought and ridiculous

It seems ridiculous to praise this – but this is a genre where I have repeatedly seen characters put everything on hold, everything paused because they simply have to hump right now. Books where characters will pause mid-escape to have sex, where they will literally stop in front of their enemies and argue over their relationship.

The relationship is good. The world building is excellent. The general pacing of the story is excellent, in terms of actual writing if not focus. I generally find her an intriguing character

I do have some frustrations. Firstly, I spent a lot of the book wondering exactly what the hell was happening, what they were doing and why. It could be that it has just been a very long time since I read the last books or it could be because there’s just sooooo many players involved. And this doesn’t get better now we’ve introduced another vampire faction and the werewolves

Which means we now have:
1) The Werewolves
2) The wererats
3) PIT (the police kinda)
4) Syndicati Vampires
5) New Vampire blokey
6) Angry former members of a vampire faction
7) The hive mind plague-end-of-the-world-scary vampires

That’s a lot of focus. So many factions. So many people to juggle. So many distractions. We get lost and a lot of this doesn’t seem relevant.

And there’s a reason why I’ve put The Red Vampires at number 7. It’s not necessarily related to how much attention they pay so much as how much attention it feels like they pay considering the overwhelming threat it represents (and this doesn’t just apply to Emberley and Jackson – I mean the vampires, werewolves et al as well). The red vampires are quite literally being held up as an utter threat to the country, if not the entire world. So… why isn’t everyone focused on this? Oh, sure they’re all looking for these long lost notes for cure – but they’re treating these notes like a spell or the Maltese Falcon or something. Is no-one doing independent research? What about finding head Red Vampire and putting a bullet in his head? Honestly if he didn’t chase them around and regularly launch attacks there’s a decent chance I’d forget about them all together. This is a terrible way to treat your big bad, especially when you get to the end of the book and we have the super, epic ending with so much damage – and that damage is justified because we have a whole end of the world spectre there – so we needed to keep that in mind and we didn’t.

While I like most of the magic system etc I have developed a major pet hate. Fire. Fire is a major part of the powers of the Phoenix. We know how fire works. It burns things. It doesn’t throw people around. You can’t pick people up with fire. You can’t knock them out with fire. You certainly can’t tie people up with fire. It’s fire. It burns. Don’t give your protagonist Swiss Army Magic when it doesn’t make a whole lot of sense. It’s not quite an Arse Grimoire, but still.

This book does sadly lack any meaningful diversity. I can’t remember any meaningful POC, any meaningful LGBTQ characters. And Emberly moves through an incredibly male world – with the only woman who was regularly mentioned both a) hating Emberly and b) dying. When we consider just how many characters and factions we have, that’s just an almost ridiculous lack.
Posted by Sparky at 12:00 PM