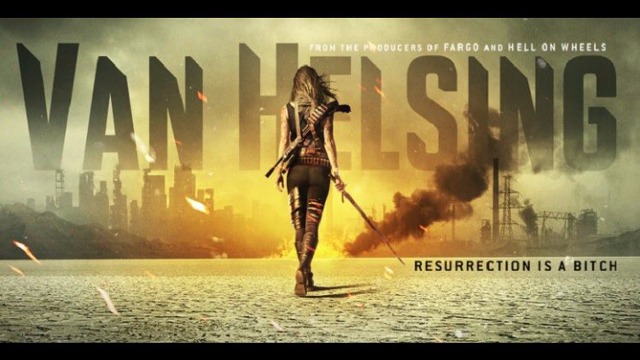 Ok, it has to be said that the first episode didn’t exactly impress me. Of course, if Vanessa were to stab Axel or a vampire eat him or something we could be making some supreme improvement.

We don’t get that but I am left with a serious question:

Why wasn’t this episode first? Seriously this episode has all the world building, it introduces the main cast – it does everything the first episode should have done. Whhhhhyyyyy wasn’t it first? This would have made the series much more… approachable

Anyway back in 2016 to a backdrop of a smaller volcano in Yellowstone erupting and scattering the US with ash, we follow Vanessa and her daughter Dylan. Vanessa is clearly pretty poor, she lives in a ratty apartment, her best friend and neighbour is Sarah, a sex worker being abused by her pimp (until Vanessa beats him thoroughly proving she’s always been kind of badass). Vanessa sells her blood to try and buy her daughter a birthday present

Poor Dylan is not only embarrassed by her mother dishing out violence to violent pimps (really, c’mon Dylan your mother is awesome) but also has to deal with her estranged dad who hasn’t sent a present and is skipping out of seeing her so he can hook up, apparently.

- Ok, can we go back to look at the feral vampires in the first episode? Because if they exist at this time how could they possibly hide from humanity. And if they don’t exist then what happened?

Anyway, the vampire dips into the blood himself and takes the rest to ridiculous creepy vampire boss Dmitri along with his minion Rebecca. This villain is terrible – he is such a caricature, I can barely understand him because he mutters and mumbles everything, occasionally drops into Russian and feels the need to ramble on about philosophy and ruling the night and utter nonsense. Honestly he’s comic. Said boss vampire realises Vanessa’s blood has turned his minion human – and quickly dispatches a vampire to go collect/kill/whatever her

This leads to a brutal, vicious fight in Vanessa’s flat with the vampire attacking her, being stabbed, but eventually overwhelming her…and biting her. The scene is utterly brutal, especially since Dylan witnesses all of it

Vanessa is taking to the morgue where she is examined by Doc Sarah – yes, Doc from the first episode who is a vampire. She quickly notices that something is up, what with Vanessa being dead yet having surprising living symptoms. She tells her sister Grace who is some kind of bigwig and declares everything classified: and causes the military to swoop in to claim the body

Doc rather awesomely calls bullshit on everything and isn’t buying what they’re selling and gives them a major hard time. And I kind of love it, but at the same time I can’t help but think this is an angry Black woman trope – I mean, why is she this invested in stopping the military taking a weird corpse? Why is she dying on this hill?

Before the confrontation can escalate, the Caldera at Yellowstone erupts. The sky turns dark as ash and debris cover everything – and vampires decide to leap out and start biting people, turning them into vampires and beginning the apocalypse

The CO of the soldiers, a Major, is clearly lost and confused and finally tells some of her men to stay and protect Vanessa and make sure Doc doesn’t leave while she and the rest go for help

Yes, this is the order that Axel is so desperate to follow. This, panicked, desperate order to “wait here until we come back” is what Axel has been following for three years.

I know orders are orders but come on now?!

I thought he’d been part of a secret mission and was told “protect her no matter what the world could hang in the balance” not that his CO panicked, told him to stay put and ran. He actually has no clue whether Vanessa is relevant to anything anyway! This is ridiculous. Someone eat him!

Forward 3 years to when they’re low on supplies and the other soldiers decide to leave to see if there’s actual help to get (but not Axel because ORDERS!). We see what was mentioned in the last episode – the group leaving and Doc getting bitten

Meanwhile Dmitri and Rebecca have some sinister scientists doing experiments for reasons… and he decides that they must have Vanessa. Alive. Wherever she is (after 3 years he’s just remembered this?). Also they have a human or possibly a vampire they’ve butchered alive for… what? Food stock? Science? I have no clue – I think it’s just to tell us that they’re super duper evil guys. Wait, I think it’s the guy who was turned by Vanessa’s blood in the beginning – so it makes near immortal humans?

So the second episode….

Ok there’s a lot of improvement here – we have a much more coherent foundation for the story and a better sense of who Vanessa is and who Doc is. We have a sense of vampires beyond animalistic monsters, doing-The-Strain-but-with-volcanoes sense that I had from the first episode. I’m more positive about this

Yet Axel looks even more ridiculous with his orders and there is absolutely no damn way I can take Dmitri seriously. Honestly, your vampire villain should not have a “goth guy trying too hard” vibe. This is comedic it’s that terrible.