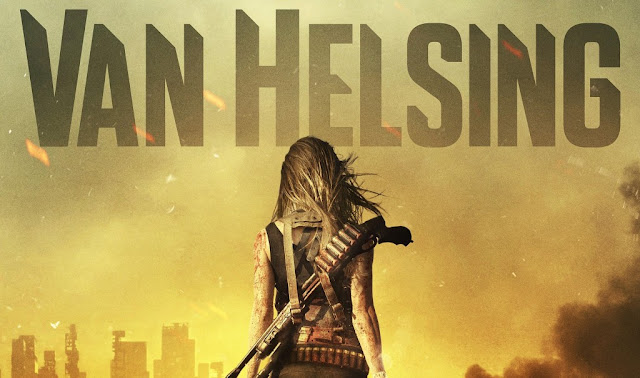 On the interesting storyline:

But he wants to test Vanessa first so after lots of dramatic speeches and noting that many of his vampire minions are afraid of her he decides to announce a challenge. He wants a vampire to step up, fight Vanessa and prove/disprove her abilities

The volunteer is… Susan. Yes Vanessa’s old neighbour and best friend who is now a vampire. Vanessa isn’t a big fan of beating her best friend but when Vampire Susan talks about eating Dylan, Vanessa’s daughter, Vanessa is done. One display of awesome fighty powers late, Vanessa bites Susan (can I just say how much the whole human biting vampire to turn them thing really amuses me? Nice touch there Van Helsing)

I suppose since Julius mentioned Dmitri we should check up on him. He’s being creepy, slightly incestuous and vaguely comic. So business as usual. Honestly I'm not exactly menaced by this villain

While Rebecca is being sexual, vaguely ominous and unexplained – this week letting Sheema go despite catching her exploring the tunnels at vampire HQ. Sheema is Mohammed’s sister and a member of the Resistance who intend to use her tunnel knowingness for some purpose or other.

Alas, this concludes the interesting storylines and we have to return to the hospital

Axel greets Brandon’s people with his usual level of absolutely arseholery and lots of passive aggressive sniping. Some of his points make sense – like the need to ration especially with more people – but generally he’s an arsehole making it clear he resents them there and would just as soon kick them all out to die. He’s such a nice guy like that

Unsurprisingly, this doesn’t win him any fans and Brandon’s group don’t really trust him and start holding their own meetings

to die. He’s such a nice guy like that

Unsurprisingly, this doesn’t win him any fans and Brandon’s group don’t really trust him and start holding their own meetings.

All in all this just makes me roll my eyes – can someone explain the level of mistrust and suspicion humans have against each other in this world setting? I suppose we have seen collaborators – but then someone’s going to have to explain that supreme bullshit to me as well

This cumulates when one of Brandon’s groups is murdered by the same murderer from last week. Axel tries to cover it up but John thinks everyone has a right to know about the murderer in their midst. Not because he’s caring and concerned but because it lets him be an arsehole to Axel. Yes, decisions are made almost entirely based on whether it irritates someone or not

Brandon is, rather understandably, a little annoyed that no-one felt the need to include “there’s a murderer among us” in the induction pack and stages a little coup locking up Axel and the whole original gang in a cell so they can snipe at each other. They come to no conclusions as to who the murderer is but Axel confesses because Brandon decides he’ll banish whoever the murderer is. Axel doesn’t really give a shit about anyone there and would much rather be out there looking for Vanessa since he has a creepy obsession over here. Sidekick Mohammed also wants to leap on this Sparticus bandwagon and adds his own confession. Please let this be so he can find his sister Sheema as he said last episode rather than to find Vanessa. Brandon doesn’t believe Mohammed but is quite happy to kick him out, unarmed, to get him out of their hair. Alas he doesn’t feel the same about Axel.

Sam also tries, but at this point they risk being sued for stretching the Sparticus reference a bit too far.