Once Upon a Time, Season 6, Episode 10: Wish you Were Here

Emma and co run into the EQ who is being awful on Robin’s grave – so awful that Emma completely loses it and slashes her with the sword – despite the risk to Regina who suffers any wound the EQ does… except not this time. Yes the sword they stole from Rumple can hurt EQ without Regina – result!

Emma now has a sword that will kill her according to her visions, but can also kill the EQ – she and Killian think this is a great way to learn more while Henry is firmly on the side of “destroy it now!”. Emma won’t because she’s the Saviour – but Henry makes an interesting counter: she’s also a mother.

This is an interesting element – because we’ve repeatedly see Emma identify as the Saviour and how being a Saviour is so important and vital and what a terrible decision dropping his saviourness was for Aladdin. But what about the rest? In some ways it’s rather dehumanising to be the hero, to be the Saviour – because you stop being a person if being a hero is all you are. And there is so much more to Emma than being the Saviour

It’s not the EQ’s day because on top of that, Rumple appears to put a tracking bracelet on her so, after he has retrieved his son, he can hunter her down and bring 8 kinds of hell on her. I said before, if you’re going to piss off the Dark One have a really good reason for it or don’t bother – a whim or pettiness will just get you dead.

Emma and crew go hunting EQ – without Regina because she can’t hurt EQ (uh… nor can Killian or Prince Sappy but they’re invited. And EQ can use magic to do so much more than direct damage).

Hey, remember when I mentioned last week that Jasmin and Aladdin seemed to be getting their own storyline? Nope, it’s all about providing a plot twist in Emma’s storyline! Oh, Once Upon a Time, you continue to disappoint.

Everyone is running scared of wishes backfiring or having a catch – so this whole episode everyone comes up with wishes which are pretty much designed to go wrong. Seriously wjo says “wishes backfire so let’s make wishes that have the backfire built in”?!

So, Regina wishes for Emma to get her wish – once expressed in despair to Aladdin – that she had never been the Saviour

This transports Emma to an alternate world – where she never left the Enchanted Forest. A world where Snow and David defeated Regina before she completed the curse, no-one went to Storybrooke and Emma happily grew up as a very sheltered princess all happy and celebrating (Henry is there, but his father not mentioned because that would break this little world).

Naturally back in the real world, Regina is not putting up with this and decides to use some cunning – since EQ is her clone and one thing that happens to one happens to both then surely Regina counts as holding the lamp as well (run with it – who are you to argue the physics of magic lamps) and she decides to wish herself into Emma’s new reality

Which is both in bad need of her snark and a whole lot of destruction. Alas, this Emma who has been thoroughly Charminged isn’t much of a hero and cowers behind her parents to save her when Regina desperately tries to reason with her

Regina turns to the only authority she can think of – Rumplestiltskin. The Imprisoned Dark One is pretty quick to accept that he is in an alternate world and gives Regina the key to re-Saviouring Emma: be an enemy. Be the villain the Saviour has to defeat. Saviours are created by the opponents they face. Regina needs to be that enemy

One Wardrobe transformation later, Regina swings into battle, kidnapping Snow and David and demanding a hero (hint hint) step up and save them (hint)

Actually it’s not the Charming Influence. The Charmings would turn up against impossible odds with no plan and rely on HOPE to save them. And. It. Would. Work. Ugh how I hates them. So very very much.

Emma surrenders. Regina murders the Charmings to try and convince Emma to fight back

What breaks through Emma’s memories is watching Henry try to kill Regina – and Emma finds her magic seeing Regina unwilling to fight back: Emma uses her magic to save Regina.

Regina and Emma are always awesome together

Unfortunately the path back to Storybrooke is derailed – between them snarking about unreal people and Rumple killing loads of people – they run into Robin Hood. A living Robin Hood. Regina’s deceased True Love.

Back in the real world, David manages to grab the lamp… and wishes Regina get “everything she deserves”

OH MY GODS CHARMINGS YOU ARE THE WORST?! Everything she deserves?! What does that even mean? This is how you make a wish for a genie to put catches in?

When that doesn’t work he tries to stab her, which also doesn’t work, so he goes home to woe and cry about what a terrible person he is for trying to stab his enemy and dear gods Killian please put him out of my misery. Go back to being set dressing in impossibly tight trousers, David 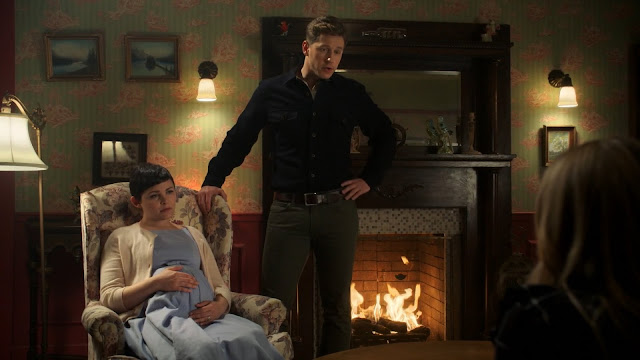 They do get the lamp back and give it to Jasmin (thankfully without wishing to wake up Snow because who knows how badly that would go given their wishing skills) so maybe she will get her own storyline.

Back to Rumple and Belle – Rumple uses all his magic to try and find their son and finds…. Noooothing. He is missing.

He goes to Belle who is naturally hostile but begs her to check with the Blue Fairy to see if the baby’s ok. They do and find that Blue was mugged by Black who kidnapped the baby

This leads to a lot of recriminations between Rumple and Belle before they take a beat and realise how utterly destructive their relationship has become and their fight over this baby has ultimately led to the baby being taken from them. They look at least temporarily read to bury the hatchet in something other than each other

But it’s time for the mysterious hooded figure to appear – and with almost no effort he neutralises EQ by turning her into a cobra in a cage (possibly the wish kicking in?) before going to Rumple and Belle. His parents

Who didn’t see this coming?