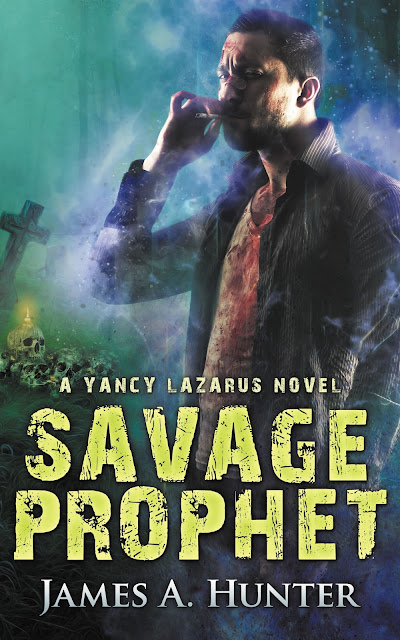 Yancy carries the Seal if the Horseman of War. His mind is being colonised by the demon Azazel and it’s a battle he’s losing

It would help if he could stop drawing on the dark power the demon offers. But with the world in the balance and another seal possibly falling into the hands of their enemies, he seems to have no choice. As he drags himself through horrendous, torturous experience after another, faces agony and horror and watches the Guild of the Staff completely collapse around him – can he really say no to the demon’s magic?

But if he accepts the demon’s help, does he risk being a greater threat than the very thing he’s fighting against?

The ongoing meta plot of this series now goes into high gear as the seals of the apocalypse and the archdemons who guard them are now front and centre to the storyline. We don’t just have Yancy stumbling across a situation that happens to be related to the epic ongoing battle on which the world rests.

This feels much more directed because of this, the grand fate of the end of the world and the consequences there are much more central. Even though that has been on the cards for a while, the last book felt more local, focusing on the Big Foot (big feet?) rather than the very world being in the balance. We definitely have the broader focus here. Along with all the epic conflict and fight scenes I expect from a Yancy Lazerous novel.

Perhaps because it is so focused, I don’t feel like this book is jammed with unnecessary fight scenes – not because there are less of them, but more because each fight as actually relevant to the overall plot line. In previous books if Yancy went to a bar, asked someone for information, pretty much anything, there would be a battle. I think one of the problems I have in taking Fast Hands Steve seriously as an epic enemy (beyond the awful name) is that he was introduced in a completely random unnecessary fight. Building a whole vendetta enemy out of a fight in a bar because Yancy can’t even play music without there being conflict going on really fails as a back story. Sometimes I feel Yancy eats BBQ in restaurants all the time because he can’t go to the shops to buy groceries without fighting ninjas, demons, and vampiric girl scouts.

Here all the action was on point

There’s also some devastatingly dramatic tension with Yancy confronting Fotuna after the horrendous things he suffers in this book. It doesn’t downplay or minimise the trauma nor expect Yancy to just breeze past it – it’s devastating and presented as such.

And I was wrong. She was out of her depth. She absolutely fell apart in a combat situation and generally Yancy’s first impressed was confirmed in spades

This isn’t a bad thing. Why wouldn’t a fully experienced combat veteran like Yancy NOT recognise someone with combat training. Plus waif-fu – or awesome fighting power houses who don’t remotely look the part – is an annoying trope that is kind of elated to the super-hot-thin-people-eating-fried-chicken-covered-pizzas-and-not-exercising trope. Actually being an active, experienced combat fighter generally comes with a level of physical fitness and muscle tone. And that’s aside from demeanour, grim bitterness etc – there’s every reason why Yancy should have been able to accurately peg Darlene

On top of that, Darlene isn’t terrible. I mean it would be tempted to shame her, hate her, demean her or otherwise reduce her because she isn’t a fighter. But she isn’t. Her skills, her administration and her encyclopaedic knowledge of the Guild’s procedures, reports and previous events is an asset and in the end definitely gives her some extremely useful input to saving the day

I like this. I like that Darlene can be capable, useful, respected member of the team without being a combat monster. While being, yes, a soccer mum. Especially since we still have Ferraldo who is, as I’ve mentioned in several previous books, a definite, skilled, dangerous combatant and tactician. We see two female characters, both adding awesome strength to the plot in very different ways.

We do have some very dubious elements that come with the world building. This is something similar to what Supernatural faced: when you have a world setting which moooshes all kinds of mythologies together, there’s a lot of dubious tropes you can follow, along with things like colonising, appropriating and generally raiding other cultures and belief systems which are all issues we’ve covered before. This book takes those issues and then sets up, the White King, a pretty blatant Judeo-Christian mythology god, as basically above them all. We have an excellent story of Indian naga and Buddhism which seems nicely done – and then jumps into this with angelic intervention and a seal of the apocalypse. We have this whole Buddhist based legend and story and just stuck in a quick “subordinate to Christianity” in there. Aside from this then ending up as part of the story lead by Fortuna and the Fates, again, restricted and controlled by the White King. Similarly when the gang travel to Haiti we have the Loa treated the same way – with Baron Samedi being pretty much completely erased as a loa and replaced by one of the seal bearers.

Which adds into the ongoing trouble of the whole Haitian and Voodoo depiction in the genre and in media in general (and in general societal awareness for that matter). Voodoo is constantly portrayed as evil, dark awful darkness with whole lots of racist undertones and exotic/savage otherness.  And in this book? Baron Samedi is literally a demonic horseman of the apocalypse. Voodoo is all about zombies, mind control, torture, gangs, child soldiers and death. All of it – there’s no counter example at all. More, the whole power of voodoo which the mage council doesn’t understand? That’s Nox. The special demonic power which is the very antithesis of

And Haiti? This is set in Cite de Soleil, a shanty town in Haiti, that is presented as basically a lawless giant violent hell slum of child soldiers, voodoo warlords, torture and awfulness.

Look, Cite de Soleil is a terrible place, it’s on record of one of the most dangerous places. And no, I’m not saying that Haiti should be presented as wonderfully wealth and prosperous and stable without gangs and crime. No, you don’t have to present Haiti has a utopia, or Voudoun as this perfectly serene religion whose followers are all enlightened saintly people.

The there’s no counter-narrative here. Everything about Haiti, voodoo and Haitians here is presented as evil, dark, horrific and generally awful. Also with absolutely no inclusion of the very relevant history behind Haitians history here. No, I’m not expecting Yancy to give us a nice historical recap of Haiti being the first (and only?) nation founded by rebelling slaves or the crippling, punishing debt that was then imposed on it by the international community in response. However, I also don’t condone a book to take a country, culture, people and religion and turning them basically into a hell-scape for Yancy to run around killing things in. You could literally have turned his entire time in Haiti into some hell-realm controlled by goblins and made no real change to the plot because nothing about this depiction acknowledge or treated Haiti as an actual place or tried to treat any Haitian as an actual person

Also I’m going to sideswipe here at the naga Buddhist monk who was basically serene and peaceful in between dishing out kung fu and, really, really? Y’know I said that it was excellently done to incorporate Buddhism into this story was nicely done? Well it would be nicer if the depiction of the one actual Buddhist person wasn’t cribbed from a 1980s kung fu movie.

This is pretty much the POC in this book – we have some other side POC who are part of the guild, but they’re not exactly major players or hugely influential on the book or plot line which does nothing to counter this… We continue to have no LGBT characters.

This series continues to have a lot of awesome moments, a lot of epic battles and an excellent meta plot. I think this book has all of that in excellent, amazing degree – but it also has a really terrible diversity problem that is, if anything, only exacerbated by it drawing so heavily on different cultures and mythologies