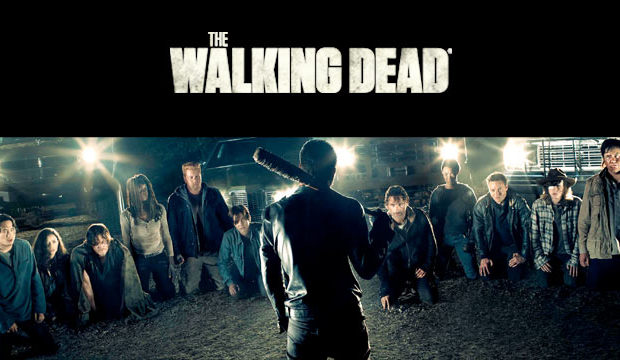 I actually kind of forgot that Tara and Heath hadn’t actually been part of the Saviours storyline at all – and, in fact, for most of this season they were separate from the rest of the group because they were both on a harvesting expedition.

I think that’s a comment on the fact that both of these characters are such background characters with little or no real attention paid to them and definitely with no storylines of their own. They were there to fill in the crowd scenes and, this being the Walking Dead, to fill some inclusion quota before their inevitable tragic demise. So I was quite impressed and shocked by this episode that focuses so much on Tara

I like how this episode opens with Heath and Tara having, basically, an existential crisis. I think it reminds us a lot of some boiling issues that were happening on the show before the Saviours arrived and consumed everything

Health is horrified by the fact they outright murdered a group of Saviours on the say-so of the people from Hilltop. This reminds us, though it can be hard to remember at this point, that the Alexandria group is actually the aggressors against the Saviours. It was Rick who launched the massacre, it was Rick’s group that decided to be mercenaries and hire out their services as killers to make a trade with Hilltop. I think that’s important to remember, if not least of which to remember the direction Rick was heading in – which wasn’t a million miles away from where Negan is

It also reminds us of another division in the Alexandrians. The old Alexandrians led very sheltered lives. Heath and his fellows, are in many ways several steps behind the others in realising what then world is about now. His horror over what they’ve done and his realisation that it’s all kill or be killed now; a lesson Tara et al learned a long time before. But he’s still in the shocked mode and just seeing the world now all as every man for himself, the brutal story of survival. Of course, Tara has learned this but she’s also survived as part of a group and had chance (and happiness) and hope rekindles. It’s a comment really that Alexandria represented hope for Rick’s people – but their arrival shattered the naivety of the Alexandrians and brought despairing reality to them

This is an episode that does the whole broken timeline thing – which I hate so I’m going to shuffle things back in order. While scavenging, Tara and Heath are separated and Tara ends up in the river and washing up on a beach where she is found and helped (secretly) by Cyndie

Can we have a moment here to appreciate the quiet horror that is Rachel? A child, gleefully running down the shoreline, killing Walkers as if it’s a game and fully being ready – and eager – to kill human survivors as well. Much to Cyndie’s horror. Rachel represents a subtly underlying horror of the series – this is what the next generation looks like. Inured to violence, fully absorbing the lesson that is so brutally hitting Heath

Cyndie quietly helps Tara to keep her secret from her group which is foiled because Tara doesn’t just wander off but follow Cyndie home. There she finds a whole community made of women – a community with a lot of supplies (including a huge stash of guns) and living comfortably off the sea (side note: if I ever end up in a zombie apocalypse, the coast line is definitely where you want to be so long as you can find sufficiently low population density)

Like so many groups, these women are deeply hostile towards all strangers and even have a kill-on-sight rule. Tara manages to be captured not killed (since she spares the life of one of the guards and because Cyndie is really trying to get her fellows to drop the whole kill on sight thing) but they’re still not rolling out the welcome mat.

Though they are relatively civilised about the whole captive thing. They feed her, are kind to her, are polite to her.

They’re very worried about letting Tara go when she knows where they are – she could lead all kinds of badness to their door, which is why they normally kill strangers. Since we’ve seen the Saviours we know their worry about being found is hardly stupid. It’s another example of the moral quandary of the apocalypse – good, genuinely good people driven to kill and do terrible things, things they know are terrible, because of fear and survival. And Rachel is there as an example of where this will lead.

The best solution they have for her is if she stays with them. And with Heath if they can find him as well. Yes, they accept men – it’s not an all female group by choice. But all the men of their group, including boys, were killed when another group attacked them where they were before and slaughtered all the men and boys. Yes, it’s the Saviours, again.

Tara, who doesn’t know the scope of the Saviours yet, is still in the full ideal of everyone working together – which Rick proposed to Hilltop. She clearly sees adding his community to the Alexandria-Hilltop network and spreads this happy, shiny vision with Natania, the leader of the group.

Natania somewhat despairingly agrees – let’s Tara go with a Scout to see if what she offers is legitimate. And that scout, Beatrice, tries to kill her.

Tara again pleas for peace and Beatrice reveals the hard truth – the Saviours attacked them and the people Tara’s group killed was just a tiny outpost of the Saviours and her people are probably dead now from Saviour retaliation. Tara needs to die because she could lead the Saviours to them – and facing the Saviours is inevitable death to them

But Cyndie saves her – saying only that Tara must swear not to tell anyone about them. She wants another way, she is tired of all these people who decide they “have” to kill people. Cyndie insists people aren’t evil – but forget who they are. And while that is true of so many people, Tara reminds her that it isn’t true of everyone

Still, Cyndie’s story is one of trying to find another way. A way where people aren’t killing people and deciding they “have to” when there may be another choice. A way where killing isn’t the only choice, an unquestioned necessity that leads to children stabbing people in the head while they’re unconscious on a beach

Tara makes it home to Alexandria – to be greeted by the grim reality there. Including that Denise is dead

And a desperate plea for her to tell them if there are any guns anywhere at all, any weapons they can use… and Tara says she saw nothing.

This has been an excellent episode for reminding us of the moral quandaries of The Walking Dead which I think was needed, especially with the Saviours. Negan, like the Governor, allows us to forget these quandaries, these debates, the question of whether kill-or-be-killed is the new reality or whether necessity is being used as an excuse for convenience. When you have a Big Big bad it’s easy to forget the nuanced morality of survival. This episode reminded us of that, reminded us that these questions still matter and are part of the world.

While at the same time almost crushing that- with Tara not telling about the weapons the women had she’s giving up on a resistance and accepting their choice: hiding keeps them safe.

It also gave us an episode that really developed one of the minor side characters considerably – I hope this is something we see more of going on; of these often crowd-scene characters actually being given more of their own space and stories. I think it will go a long way to combating the Rick focused nature of the show, make a lot more of the deaths and losses more poignant and meaningful (by making them people)

I do think I would have preferred more mention of Denise rather than just have Tara sad in her old clinic. We know why she is sad, but so many of our shows (and media in general) tend to downplay or outright hide LGBTQ identity the more prominent a character becomes: like Tara being the effective protagonist of this episode means we need to not draw attention to the fact she’s a lesbian. She can be a lesbian when she’s extra #5494169 but not when she’s central to the plot.