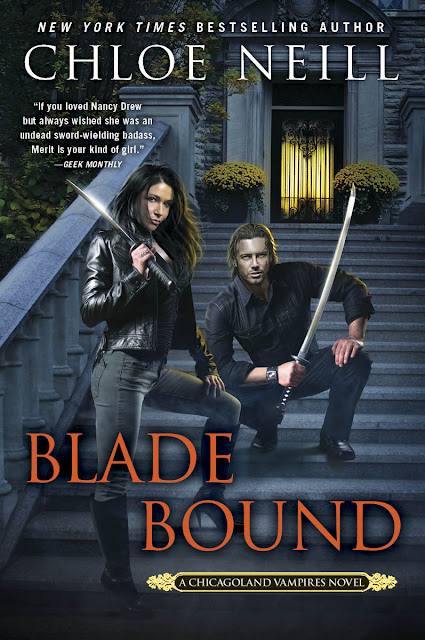 Merit and Ethan are finally getting married. Everything is finally going her way

Until Sorcha returns, bringing winter to summertime Chicago, threatening the entire city and having one terrible demand: that the city and over Mallory and Merit

I am a little bemused about the mayor taking the lead so much. In fact, this has been a thing that has bemused me throughout this series: why is the mayor all powerful, how come they have so much authority and why is no-one else involved? I mean, if the third biggest city in America is evacuated because of a supernatural menace isn’t the president obliged to make a speech or something? Shouldn’t the governor of Illinois actually notice?

The story gets more and more epic but at the same time it’s clear the author wants this to be very very local. This is the Chicagoland vampires, it’s a story about Chicago so even when we probably should spill a little beyond the borders.

I think this probably centres on a general underlying issue I’ve had with this series from the beginning. It has an element of simplicity that kind of hangs on the story. Like keeping the story focused only on the Chicago authorities, making the mayor pretty much a complete authority within her realm and having her and her minions make decisions which are pretty dubious. It serves very much to make our main characters look intelligent, insightful and martyred but it’s a little clumsy (we see something similar ion how this series is pretty disjointed in how vampires are treated, flirting between viciously hated and violently oppressed minority to moderately tolerated/ignored other and back again within a pretty short space of time).

This bleeds over into the plot as well – it’s quite predictable with a lot of conflict resolved quite easily. Ethan makes a speech. Mallory manages to translated a centuries old mystery in a couple of hours. It adds to the story being a trifle… predictable? The arc is not one that surprised me even once and there was nothing resembling a twist

But… it’s still very fun. It’s one of those books that asks me to question whether twists, originality or a great deal of complexity is necessary. The story was predictable and simplistic – but still emotionally engaging: invoking anger at the terrible way the vampires are being treated. Excitement from the battle scenes and some decent, engaging development of Ethan and Merit’s relationship and their concerns over the prophecy that says Merit will become a parent. None of these are original and, yes, a lot of them are very predictable – but that didn’t make the characters any less engaging. These same patterns have been continuing for a long time in this season – but I still largely enjoy them. I like Merit, she’s fun, capable, not as bright as she’s written but still nifty without being overpowered. She also has some excellent female friends – which has been a major issue in the series before now: other women were demonised or occupied a relatively small role in the story. But increasingly we’re seeing Mallory move to become her own, skilled fun character who is taking a prominent space in the story and not constantly tormented by her own guilt which is an excellent step forward

Though I have to say I’m not a massive fan of Ethan or Merit and Ethan’s relationship. Nor their end game (I think this whole baby ideation seems to have dropped on her from nowhere apparent). Sure he’s finally respecting her as an equal and deciding that he shouldn’t be putting his Sentinel in a little secure box somewhere, but my gods it took him a long time and he still has to constantly fight that instinct.

I also wish that over this series the very few POC had more prominent roles. Or there had been some LGBTQ characters (after 13 books + short stories. Really).

Working my way to the end of the review, I have to say my comments about the sometimes dubious plot limitation, simplistic railroading and coincidence still apply: but none of this is a deal breaker. None of this stopped the story from being engaging. None of this stopped the book from being fun. None of this stopped me from caring about Merit, being angry on her behalf and being excited by the action she faced. I still laughed at her and Mallory bouncing off each other and still felt her worry over the world they lived in. Basically, these issues don’t change the core important element of this book – and this series – it’s fun, it’s enjoyable; sure it’s not my favourite series but it’s a series I’ve returned to happily again and again and again.