The 100, Season Four, Episode One: Echoes 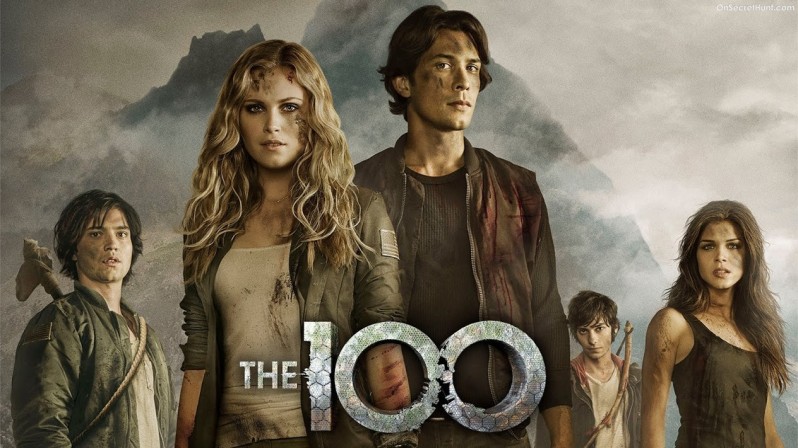 It occurs to me that The 100 is the perfect show right now. Let's face it, with Agent Orange as president, we are living in terrifying times. The 100 illustrates with its dystopian setting how much worse things could actually be thus ironically providing a sort of mental break.  It's not an accident that we have seen the popularity of the dystopian drama in recent years.  With Echoes, The 100 returns for its fourth season and once again, the population of the earth is in peril which only Clarke and her cohorts can stop. Yes, it's rinse and repeat but it never fails to be entertaining.

Echoes begins right where the season finale ended. Clarke and Bellamy (who has gone back to being good thank goodness) don't get to celebrate long because it seems that ALIE left the humans a parting fuck you.  The nuclear reactors are breaking down and the earth will be flooded with so much radiation in six months that no human will be able to survive it. If that were the worst of it that would be bad enough but the The 100 has more drama in store for us.

Octavia climbs down the tower and sees Indra being cut down.  Octavia rushes to Indra's side to report that Pike is dead. I've just got to say one last time that The 100 didn't do right by Michael Beach. He's an amazing actor, who wasn't given anything near his ability to perform. Clarke gets busy trying to help the wounded but it's clear that they blame her for what happened. Clarke is quick to pick up on the vibe and instructs Kane, Jaha, and Abby to get out of the city.  Before they can make a move however, Roan is discovered alive.

Abby and Clarke rush to examine him and discover there's no exit wound from being shot by Kane. Echo however is not down with either woman helping Roan and instead uses the opportunity to seize power. Echo announces to the onlookers that Skaikru is responsible for what happened and that Azgeda is now in control of Polis.  Bellamy of course is shocked, even though flip flopping is kind of Echo's trademark at this point. Not even a small hiccup of having an ambassador stand up and suggest that Polis should be ruled by a counsel of ambassadors until commander can ascend stop the ambitious woman. Echo doesn't even blink and quickly slits the woman's throat and then orders that Skaikru remain in Polis.

It seems that Echo can give orders but Clarke and the rest of Skaikru are not about to follow them. Using the the passageway in the flamekeeper's temple, Skaikru makes their escape with the exception of Octavia, Bellamy, Clarke, Jaha, Kane and of course Clarke. Indra arrives and greets Kane with a warm hug. Kane really has come a long way since arriving on earth in terms of his relationship with Grounders.  The reunion isn't pleasant for long because Indra is quick to inform everyone that Azgeda has 1000 warriors in Polis. Unsurprisingly, Octavia and Indra's first response is to go to war and Kane goes into strategist mode, wondering how many tribes they can get on side.

The war council is called to a halt when Clarke informs everyone why they don't have time for a war  because of  ALIE's last fuck you. Bellamy steps up to report that he's gotten into contact with Raven, and she's working to discover whether or not there's any weight to ALIE's final threat. Clarke however is absolutely certain that ALIE wasn't playing with them and that this is coming to pass.

Jaha, who has been collecting the bodies of the dead, takes Ontari's body to the commander's chambers. Echo once again shows her colours and rewards Jaha with an ass kicking. I cannot say that I'm made at Echo over this one. Jaha deserves to have his ass kicked repeatedly and often.  He's the most useless character on The 100. An Azgeda soldier enters to report that Skaikru wants to surrender. Echo grabs Jaha and takes him with her to meet with the representatives of Skaikru.  Echo roughly shoves Jaha at Skaikru with a message that the only one she'll speak with is Bellamy. Jaha uses the moment to inform Kane that their plan worked. Y'all know what happened right?

Octavia cuts herself out of the shroud and gets to work taking out the Azgeda soldiers that Echo left to keep guard over Roan.  Octavia then opens the door and lets in Clarke and Abby, so that they can treat Roan. While Bellamy negotiates with Echo, Abby manages to remove the bullet inside of Roan. Octavia tries to get them to rush but they are captured before they can finish treating Roan. Echo is not pleased to see the women with Roan, even though they try to explain that they were saving Roan's life. Echo gets all Ice Queen and prepares to decapitate Clark,e but before she can act, Roan wakes up. Well, that's timing for ya.

Clarke calls out to Roan to help them and to honour their agreement. Echo has other plans and is quick to suggest that Roan kill Clarke and take command. Having been out a tick, Roan decides to put Skaikru in a cell while he thinks over his options.  Echo blames Skaikru for the death of Ontari and pulls out the crown that once belonged to Roan's father.  Echo suggests that the people aren't really loyal to him given his long absence and so the best way to secure their faith in him is to offer them Clarke's head on a platter.  Echo is going full out evil. Roan does have enough sense to question who Echo is loyal to and she of course claims that it's him. Finally, Roan calls for Clarke to be brought to see him.

At Arkadia, as aforementioned, Raven gets the radio working and talks with Bellamy and Jasper does his I'm sooooo sorry bit.  Raven decides that she needs to get down to work and so kicks everyone out. Jasper is amazed that though Raven is no longer in the City of Light, that she can still code. Monty and Harper leave to go and get it on and on his way out Jasper grabs a gun. Yes, they're going right back to Jasper's man pain.

Alone in his room, Jasper looks at Maya's favourite painting one last time, writes Monty a goodbye letter and then puts the gun to his chin. Unfortunately for us all, this is when Monty shows up to collect Jasper, so that they can all go and chat with Raven about the reactors. If only Monty had just been five minutes later. Oh hush up, you were thinking the same damn thing.

Raven reports to Monty, Jasper and Harper that the reactors were reinforced to survive a nuclear strike however that reinforcement was only meant to last for 100 years and their time is up. The radiation rates are already rising and though they have six months before critical mass, things will get a lot worse before then. Jasper is amused by this and laughs, before handing Harper the gun. With time running out, Jasper's solution is to go and watch the sunrise. Someone needs to put Jasper and us out of his misery.

At Polis, Echo supervises Clarke being brought to Roan with glee, certain that she's going to get to watch Clarke die. Roan orders everyone out of the room, much to Echo's disappointment because he wants to have a chat with Clarke.  Clarke doesn't waste any time letting Roan know what is going on with the reactors but he believes that they survived the first time around and so will survive this. Clarke argues that things will be much worse and that the only way out of this is science and for that they need Skaikru.

Roan however is still not moved because he is well aware that if he allows Clarke to live, he won't last six days, let alone six months.  Finally, with no option left, Clarke shows Roan the flame. Clarke suggests that Roan take the flame and rule until another Nightblood can be found.

With flame in hand, Roan addresses his people and vows to keep the peace, and even agrees to Skaikru become the 13th tribe. Has anyone stopped to think about how unlucky the number 13 is? Echo gives Bellamy a medallion that will allow Skaikru to travel safely and asks if they will ever be able to trust each other again. Yes, she's flipping once again. Bellamy wisely says no.

Jaha, Bellamy and Clarke head back to Arkadia to work with Raven on a solution to the reactors, while Abby and Kane stay behind to ensure the peace.

In the last scene of the episode, a woman walks in the dead zone by the pyramids and is obliterated by a radiation storm.

Echos did exactly what is expected of a first episode of a new season - identify a problem for the cast to deal with for the coming season.  It was extremely fast paced and filled with the drama we have come to expect from The 100. I am completely relieved to see an end to the City of Light storyline because it seemed to drag on and unfortunately made Jaha, who needs to be voted off the island, central to the plot again. It's why it felt so good when a young woman who Jaha was trying to help responded by spiting in his face. I also loved Murphy letting Jaha know that he is absolutely responsible for the whole City of Light fiasco.

Speaking Murphy, while he didn't have a pivotal role in this episode, he did make plans with Emori. Murphy's first idea was to return to Arkadia, even though Emori points out how many times he has been cast out.  Murphy however is certain that they'll be safe because they owe him now. I just love how Murphy skips over all the shit he did to get cast out in the first damn place.  In typical Murphy fashion however, when he learns about the plan to save Roan, he decides to leave with Emori. Murphy will always put Murphy first.  I do hope that Murphy won't be absent from the story for too long because he provides the best snark on the show.

Perhaps the second greatest moment of the episode was the hug between Kane and Indra. For far too long, Indra has been shunted to the side and it's my hope that this season she will be moved to the forefront.  Like  Michael Beach, Adina Porter deserves so much better. I want to see her interwoven into the story better and perhaps this new camaraderie between Indra and Kane will result in connections which will draw her in. I know that in terms of POC cast we have Bob Morely; however, it's clear that the writers don't intend for Bellamy to be read as a character of colour. And no the irrelevant Jaha doesn't count.

I know I said it in the recap but is anyone else just sick to death of Jasper's manpain? Everyone has lost someone, yet he wallows in the death of a girl he knew for a N.Y. minute. Enough already. His sudden switch to see the sunrise further didn't endear me to him.  I suspect that as the season goes on, Jasper will get more and more irritating. Hey Monty, come get your boy.