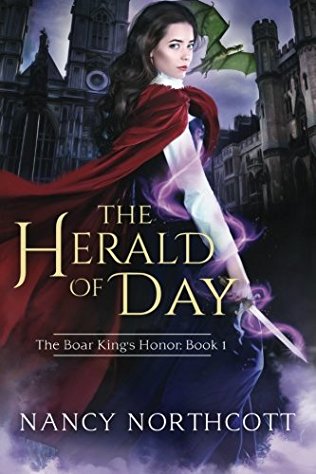 I really like the history and the world building of this book, how it draws heavily on English history, the Stuart era and especially all he controversy surrounding the War of the Roses (there is actually a historical society that protests the treatment of King Richard in the historical record since the Tudors did a killer hit job on the man’s rep to increase their legitimacy). This draws out the whole debate extremely well and makes the world building very rich

It folds in more from both the civil war, the protectorate and the restoration of the monarchy – it’s all fascinating

The main barrier to me enjoying this book is its pacing. We have the beginning which is fascinating and interesting as we’re introduced to Miranda and briefly see her life before she meets up with Richard – it works as we’re reminded of the historical context (and this is definitely well researched) and the difficulties Miranda faces. It really nicely sets the tone, theme and events of the book and the politics at hand.

Then we have the middle which sadly splodges along. Miranda is with Richard. He’s trying to learn how to use magic but not really achieving anything. Richard and his fellow Gifted worry about bad things that are happening that are bad and how it worries them but they’re not really doing a whole lot to stop them. Miranda continues to fail how to learn magic. Richard worries. They have odd meetings where it’s clear they’re into each other while at the same time they can’t be together for Reasons. Miranda has a dream. It’s vague. And we’re introduced to Richard’s friends, there’s a party, bad guy is bad. Splodge splodge splodge. It would have been interesting if we’d had skirmishes, development of Miranda’s magical skill or her character or… well… anything. But splodge splodge splodge.

It doesn’t help that in an early part of the book we have the villainous antagonist happily describe to us a) what he’s doing, b) his motivations, c) how he’s doing it, d) how someone can stop him, e) why he particularly has a grudge against Richard and f) why Miranda is a threat. Since the rest of the book kind of rests on the protagonists discovering these answers it kind of deflated any tension.

Richard’s only real actions against said bad man was to occasionally go to the council of the Gifted for the following repeated exchange:
Richard:  He’s a bad man! Put him on trial
Council: Do you have proof?
Richard: no, but he’s totally bad
Council: errr… that’s not really enough
Richard: We can use magic to force him to confess when he’s on trial!
Council: but we can’t put someone on trial just because you accuse him. Especially since you’re known to hate him…
Richard: But he’s a bad man!

This is kind of all they did to stop the big bad doing his big bad thing. So most of the book is not really doing anything about the big bad interspaced with Miranda trying to use magic and pretty much failing in between ominous dreams. Sploooooodge.

Then we reach the end of the book and suddenly we’re sprinting to the finish line. We have the big quick reveal and mastery of the bad guy’s methods. Miranda suddenly pulls out not just power but 8 levels of confidence from somewhere. Richard and Miranda stop do-si-doing around their relationship and just go for it and we have a dystopian alternate world and fight scenes and magic and time travel and a hundred people who were kind of periphery are suddenly important and it’s suddenly – who what why how and dreams and ghosts and slooooow doooown there.

Miranda feels like an entirely different person. Suddenly all these people who have kind of moped around the edge of the splodge are actually super important and I totally should have remembered their names

Diversitywise we have very little: there are no POC, no LGBT people which is all sadly common when we have any kind of historical fiction. POC and LGBT people existed in the past.

We do have another female character alongside Miranda – Richard’s mother who is a skilled and capable magic user I would love to see more of. She does consider a lot about the vulnerability of women, how much protection they need, how much agency they have – and so low level calling out of men being protective of women for things they’re not actually afraid of (while at the same time being especially indulgent of this idiosyncracy)

There’s also a lot of debate from Miranda about the issue of class and how she is so far out of her depth as a serving maid alongside Richard’s noble class. Which is all well and good but it’s shallow. Because she does worry that her class will be an inevitable gap between them and how hard that is to overcome: but a lot of the actual indicators of class are missing. Miranda is educated, well spoken, aware of court etiquette. In short, while she isn’t upper class, she can fake it really convincingly which rather minimises the actual barriers she has. In short, the class barriers she has are more in her own mind than actual structural since Richard is bankrolling her and she already has all of the markers of an upper class upbringing

This is especially when compared opposite Richard’s curse. It feels formulaic. These two will fall in love, it is known. So, per the Great Romance Statues, there needs to be conflict for why they can’t be together (but not really). She has class. He has his family curse he’s not going to pass on to other generations. Both of these meaty issues are… not resolved but kind of handwaved by the end of the book.

I do like Richard seeing class as as much as duty as an advantage. Sure he doesn’t want to pass on his curse, but nor does he want to burden his people with an unsuitable liege.

I like the concept of this book, I appreciate the work that has gone into the history and world building. But my gods the pacing is an issue, all that splodge. All that painful splodge