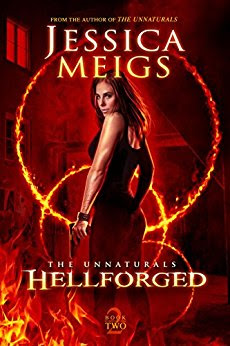 Riley Walker has been labelled rogue by the agency by her former mentor, Brandon - and is left with no choice but to run. Of course Scott will follow - his loyalty to Riley has only grown stronger; as is the unexpected help from the Agency’s Director


She expected many things to come chasing her - but demons were never among them. They are forced to appeal directly to the supernatural specialists in the Agency to survive… but Riley, and her unpredictable new powers, may be the real key to fend off the attackers - especially when one of their own is possessed by something far worse than a mere demon


There is a lot of action in this book. Our characters are all secret assassins for the government, with a specialty in the supernatural. They’re being pursued by a former mentor and general bad guy who has a penchant for using demons. There’s a lot of fighting, a lot of planning about fighting, a lot of running from crisis to crisis and planning for the next crisis.


The action is well done, the fight scenes exciting and flowing with lots of skill on display as well as a steady diet of tension and fear. There are definite stakes and, barring one element I’ll get into, a good sense of them as professional agents.


We also have an excellent prominent gay couple with Zachariah and Ashton, whose love for each other is never in doubt and matched equally by their capacity and skill. They’re not victims or weak or stereotyped or dead weight or ridiculous - they’re excellent together. Ashton, a long term agent and a complete human, also has been severely injured in his work for the agency and is disabled - that doesn’t make him weak, incapable or not a valued member of the team, but nor is woo-woo or plot contrivance used to erase his disability when it could be convenient


Sadly we have not developed any of the minor POC characters from the previous book into dominant roles - or roles at all - and this book is very white. Vanessa has made an appearance as another female character but her prominence is still not really developed even as her skill is acknowledged.


I do have some issues with the shape of the story because I ended up not enjoying it a great deal.


We have all this woo-woo thrown about but very little actual clarification or exploration. We have demons and angelic power… ok, what does that mean? Why? We have vampires… ok can we explore that? We have an ex-vampire, can we explore that? We have a legend about the Witnesses… ok,  what does that mean? There’s a lot of stuff that just is because we jump from battle to crisis to crisis to battle.


This also affects the characterisation: like I love Ashton and Zachariah’s relationship and we open with some excellent moments examining Ashton’s injuries and Zachariah’s battle fatigue - but this is all quickly cast aside so we can focus on the drama with Ashton in a terrible situation and Zacharia being full of rage and angst


Rage and angst pretty much characterises Riley as well - she’s a very skilled fighter, obviously has issues of hunger and deprivation in her past but she has a major case of anger and rebellion and storming out which gets in the way of actually examining her. Honestly I also question how she can be an assassin, no matter how good a fighter she is, she’s impatient and inclined to fly off the handle far too easily.


And why is the director of a secret cabal of government assassins deciding that the best thing to do with a demon worshipping evil henchman is to promote him to high office. Why? Explain this? And no “keeping your enemies close” isn’t an explanation for the leader of a secret assassin cabal since keeping your enemies very very very dead is a much better adage as we’d assume the leader of an assassin cabal would understand. And why does Brandon have the power to virtually use those assassins as his own virtual army while Damon the director is being all shady?


I’m not saying there can’t be a reason for all of this - any more than I’m saying that there might be a big world and lots of meaning behind the prophecies and monsters, or that Zacharia and Ashton don’t have a meaningful relationship - the problem is that the book doesn’t explore any of this


This is similar the issue I had with the last book. I love what these characters could be. I love what this world could be. And I love what the story could be WITH those foundations established. But I feel the book is in such a hurry to tell that story, those foundations have not been well enough established. I need more to follow these creatures beyond just a name, I need more to invest in Riley and her relationship with Scott and what that means, I want to see more of Ashton and Zacharia and I want Damon to actually make sense. Then we can run with exactly the same story and it will be awesome.