The Fangs of Freelance (Fred, the Vampire Accountant #4) by Drew Hayes 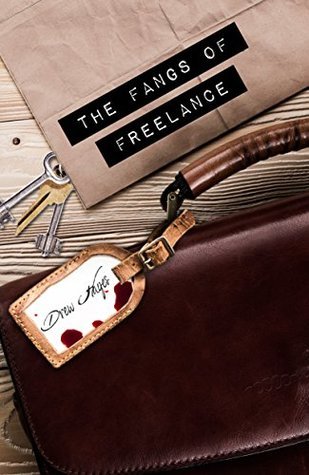 Being an accountant, even if it is for the paranormal community should pretty much be a danger free calm job. Despite Fred's sweater vests and over all calm demeanor, trouble seems to routinely find him.  Fred isn't the bravest vampire in existence but his strong sense of morality and concern for others has earned him friends and allies who are quite powerful.  Now that Fred is the leader of his own clan, he has to become even more involved in the lives of his friends.

My constant criticism of this series is that each book is more like compilation of short stories rather than one long discernible novel with a beginning, middle, climax and end.  It's almost as though Hayes had several good ideas and could not find a way to pick one and flesh it out until it became a standard length novel. What Hayes does instead is to pick an overriding theme and then write stories which fit whatever narrative he's chosen to fixate on.

The Fangs of Freelance is really all about how Fred adjusts to being the leader of his own clan and the new alliance he makes with the Agency.  Fred may not be a brave vampire and is still relatively new to the supernatural in comparison to his friends but becoming the leader of  the clan of Fred has given him remarkable power. Fred could choose lawfully to twist his friends to his will, or to make life altering decisions for them but instead, Fred chooses to use his powers to empower their autonomy.  This manifests when Fred encourages Albert to spread his wings because Albert possess a weapon of destiny, even though this will take Albert away from Fred.  It's Fred who sees the usury of Amy's contract and rather than enriching himself, not only gives Amy the ability to free herself financially, thus opening up new options, he turns down a bribe to maintain the status quo. Essentially, Fred is just a classic good guy.

Fred's basic decency has earned him the respect of his friends who have formed his clan.  This decency has caused his friends to jump to his aid when he needs it and or risk their lives to protect him.  Arch actually dies to protect Fred from his sire. Sure, Arch may have the ability to resurrect but being decapitated cannot be any fun.

The Fangs of Freelance is the fourth novel in this series and I have to say that the novelty is starting to wear a little thin.  Yes, Fred is unique because of his passion for numbers, fairness, and sweater vests. Yes, Fred gets himself into interesting situations because of his unfamiliarity with the paranormal world and his skill as an account allows him to come up with unique solutions. The problem is that Hayes has hammered home on this to such a degree that it feels been there done that.  The Fangs of Freelance doesn't really offer anything new to this universe or give us any new characterisation to make it a fun read. If you're going to go down a quirky road, it's something that you have to keep playing with in order for it not to grow old and tired.


I very much have to bring up the grooming which is a reoccurring theme in the Fred, the Vampire Accountant series. We are reminded that Gideon is an ancient dragon who has taken on the persona of a small child in order to supposedly grow up alongside Sally.  Sally is special because when she reaches maturity she will have the ability to give birth to a dragon and this is a big deal because the dragon fertility rate is extremely low.  Richard, Sally's father agreed to the betrothal of his daughter to Gideon, under the condition that Gideon vow to keep Sally safe and agree that Sally has to choose to marry him upon maturity. In Gideon's mind. the only way to ensure that he's Sally's choice is to hide inside the body of a child and grow up alongside her. Anyway you spell this, it's grooming. It's sick pedophile behaviour and not a single character seems to have a problem with this. It's supposedly fine because Gideon is devoted to Sally and is willing to even sacrifice himself for her. If the other paranormal beings are scared and overwhelmed by Gideon's power, how much of a chance does Sally even have, particularly because Gideon is being manipulative with her? This is one story line that I wish that Hayes would drop altogether.

As aforementioned, The Fangs of Freelance is the fourth book in the series and it remains sadly largely erased. Bubba, the only gay character in this series does make a small appearance in the novel but he is certainly not central to the various stories in The Fangs of Freelance. I will however say that at least there isn't a repeat of the homophobia Hayes engaged in in the first book and Bubba seems to be over his crush on Fred. There are still no notable characters of colour to speak of or disabled characters. Diversity continues to be a sore point in this series.

I have to admit that I was very much looking forward to reading The Fangs of Freelance. Unfortunately, by the end of the book,  I found myself wondering if I even wanted to spend more time reading about Fred because it's starting to feel as though Hayes is out of ideas and is only recycling the plot in order to keep the series going.  Obviously, The Fangs of Freelance is not meant to be serious and it is at least self aware; however, the story has failed to grow even a little bit, thus making it boring to read.  I hope that in the next book Hayes recovers the spark he lit in The Utterly Uninteresting and Unadventurous Tales of Fred, the Vampire Accountant. The best thing that I can say about The Fangs of Freelance is that it's about as exciting as a bowl of lukewarm oatmeal.