Squawk of the Were-Chicken by Richard J, Kendrick 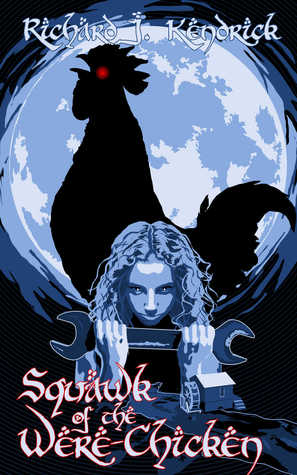 I mean “werechicken”? I was in right there. That’s such an awesome parody with so much potential for utter hilarity. Bring on the werechicken! Let it be ridiculous! Let is be terrible! Let it be hilarious! Fear it’s BA-GAWK!

And some of it is awesome. I got half way through this book and nearly put it down so many times - but each time I was about to put it down there was a lovely little moment of awesome. This lovely little apparently medieval kingdom with its distinctly agrarian feel is full of highly erudite people. I love that the teachers of this rural school turn goldilocks into an analysis of forensic investigation and encouraging small children to read fairy tales and “question the socio-political hegemony those stories are meant to perpetuate!”. Or the farmer and his love of philosophy reminding us that absence of evidence is not itself evidence of absence.

It’s hilarious, it’s really well done and it brings both a wonderful challenge to preconceptions, some nice thinking points and just this almost sublimely ridiculous feel. Every time I’m about to drop the book another moment happens and I think I can keep going

There’s also some nicely interesting themes - like Deirdre rejecting the idea of becoming an apprentice because adults have to specialise and can’t learn ALL THE THINGS instead just get to learn one thing. And there’s Deidre’s inventing which could also be fun…

Except… this would have been reinforced more if Deidre had actually shown a diverse interest in different topics rather than just inventions. Or even if her inventions meant more by the stage I finished

There’s also Fyfe - for reasons I didn’t reach (and don’t matter) Fyfe for some reason has a lot of modern 21st century cultural references pouring into his head causing everyone to consider him pretty weird. And it could be another element of funny, patently ridiculous silliness. And at times it is, it really is. And it’s definitely trying…

But it doesn’t succeed. And I hate to say it because it has all the ingredients of being really really good and zany. And I need some zany… but it’s just not consistently funny. We have brief moments but so much of it is a slog and not funny

Part of the problem is I’m not sure what this book wants to be. It was advertised as YA… and part of it feels that way with the elaborate nature of the language in places. But the general tone and attitude of Deirdre, our protagonist feels a lot more… middle grade; definitely childish. It doesn’t so much straddle that line as teeter across it like the world’s most drunken tight rope walker, constantly plummeting off one side only to climb out of the net to fall down the other.

The worst of his is how Deidre’s mind wanders. And it’s a good way of showing Deidre is easily distracted and what that feels like but this is a description of Fyfe’s facial expression:


“Hi expression wasn’t just vacant. It was completely abandoned. When she looked into his eyes, she could practically see the signs saying, ‘Temporarily closed for renovations.’ Only the sign was askew and dusty, because the renovations had started three years ago, but the contractor ran over budget, and then the money ran out, so the work only got halfway done. And the shop couldn’t reopen like that, but without an open shop, there was no money to pay the lease. So the renters were out. Only meanwhile, property values had leapt through the roof - figuratively, of course, though the roof was beginning to look a bit dodgy, in Deidre’s opinion. And so the owners had raised the rent accordingly, only no-one was interested in paying what they were asking for a half-renovated, mostly dilapidated storefront. But the owners wouldn’t budge because of the principle of the thing. And that’s what Fyfe’s expression looked like.


Just… no. It’s trying so hard to create an amusing little aside but it just rambles on and it doesn’t stop and it’s not even really funny or amusing. And it’s not the only occasion. This is how she describes two people acting suspiciously


They probably slept in a suspicious manner. Which was a completely hyperbolic thing to think, and what exactly would a suspicious sleeper look like. Did that mean that you were suspicious that they weren’t really sleeping? Because that’s not quote what Deidre had meant when she thought the thought that she’d initially thought. Nope. She’d meant something more like, the twins acted so suspiciously all of the time, that even if they were really and definitely completely, no doubt about it, asleep, they seemed like they were up to something. Plotting maybe. With that horrible I knew-something-you-don’t-know-and-it-gives-me-the-upper-hand-so-I-can-make-your-life-unpleasant-smirk. Like they were pretty much always wearing- Could it be true? Could that thing that moms everywhere always said about not making that face - you know, whichever face it is that annoys the particular mom in question - because it’ll stick that way, could it really be true? Could the twins actually have made their faces stick with that smirk, and so it’s there even when they’re sleeping?Eye roll. What was she even thinking about?


Good gods Deidre I don’t know! No-one knows! Why is this here? Whyyyyy?

I’m trying not to be cruel because it does have potential… but it feels like someone trying to pull off hilarious, Terry Pratchett-style footnotes (which, were awesome. RIP Sir Pterry, you are missed) and just not pulling it off.


And… it broke me. Because those wonderful gems in there I really liked are neither numerous enough nor shiny enough to make me dig through more of this... but it has such potential - just run it through another couple of drafts and edits.