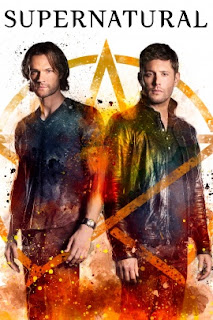 
But we ended last season with the most depressing ending even Supernatural has managed. We’ve had the world ending, big bads rising and terrible things caused all too often by the brothers’ own mistakes… but for Castiel and Crowley to be dead and Mary to be lost in a hell dimension is a big step for even Supernatural


And on any other show I would be screaming retcon. You don’t kill half your main cast and several fan favourites, it’s just a bad idea. But that number “13” makes me doubt. 13 is a lot of seasons. 13 is the kind of number that makes me think reboots, shake-ups and even outright shark jumping become possible: and paring the cast down to Sam and Dean again could be just what writers of a 13 season show want to do


Which means Castiel may be really really dead. 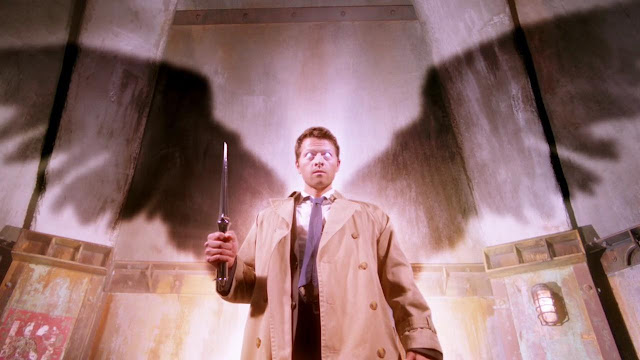 While Dean is reeling from All The Grief, Sam speaks to the new Nephilim Jack - who keeps asking after his father which is a little worrying given the whole son of Lucifer angle. Sam tries to talk to him being Sam and it may have worked - but Dean comes in and draws a gun. Dean’s not exactly good at processing emotion anyway and he’s looking for someone to blame for all the badness - Jack is a good target


Of course, Jack is also a nephilim with super powers which he uses to knock them both out while he goes wandering around, stark naked. This ends up with him running into a fast food restaurant, the sheriff being called and him being taken to the police station with a very reasonable, very kindly sheriff (honestly she’s a good candidate for another character in the we-all-hope-it’s-happening Jody spin-off) who is understanding and kind and tries to find out who Jack is even as he mutters random supernatural mumbo jumbo. And his fingerprints are weird. And he has clear woo-woo powers for the stealing of chocolate bars from vending machines.


He continues to be confused and asking for his father


Sam and Dean keep tracking him, Dean picking up a hand injury and a local drunk lady with Issues, until they make it to the police station, just in time for Sam to tase Jack as he starts to gay haywire


And sheriff awesome to arrest all of them


That leaves the Sheriff in a room with Dean for him to give her the monster speech (and be faintly amused but quickly backing off from any idea that he’s a super hero). While Sam talks to Jack. It’s quickly clear that he’s lost and confused, though he remembers a few things (like opening the portal while still in the womb) and that most of his mojo is instinctual and fear based more than anything else. And that father he’s looking for? That would be Castiel - the man who mother told him would protect him in this dangerous world (the same reason he grew to adulthood so quickly - his mother said the world was dangerous soe being a baby would be too vulnerable). So, yes, the Nephilim has All The Power, basically - but doesn’t seem to be evil. Sam’s convinced


Which is when angels, and angelically possessed drunk lady attack. It seems angel radio causes debilitating pain in Jack. These angels remind me of some of the early series angels - beings you simply cannot fight without trickery, angel blades and the odd bit of supernatural help. They’re just too strong and too powerful. In one on one attacks both the Winchester brothers are defeated - but Sam manages to draw one of his angel banishing symbols that gets rid of two of them - drunken possessed lady has time to tell them they want Jack because he’s ALL THE POWER but faced with the fact she can’t have him she stabs him with an angel blade instead, before being stabbed herself


She is dead. Jack is… not. Not even overly bothered by this. That would be that “all the power” thing.


Dean agrees. He refers to Jack as the “kid” which suggests a level of melting towards him but he still insists that Jack is evil and will one day have to be destroyed - he wants him at the Bunker to isolate him from the rest of humanity so no-one else dies. I think this is less that Dean actually thinks Jack is evil but more that Dean is still angry, still looking for someone to blame and simply is not in a place to believe the best or hope for anything. He doesn’t have hope


This is more evident when Sam suggests they can still bring Castiel back - but Dean says they can’t. He already tried praying to Chuck, demaning Chuck step in, pointing out that chuck owed them (and got nothing. Hence the blood and injured hand when he punched a wall in rage and frustration). When Sam suggests Mary is alive Dean drops that as well - Mary went through a portal with Lucifer. He’s convinced Lucifer would kill her as soon as they were through.


This leads to the funeral which had every bit of emotionally devastating as you’d expect. Let’s face it, Supernatural has always excelled at angst, pain, grief and loss and Dean actually has 800 versions of grieving (throw in Sam explaining what saying goodbye means to Jack and this whole scene is poignant). That several stages of grieving also shows a new direction for Dean’s pain: Dean is usually king of denial. He retreats into anger and then expects to fix it. It’s been one of the repeated issues of the series, Dean not giving up and causing apocalypses trying to save the people he loves (usually Sam). He gets angry, he messes things up, he gets petulant, but he doesn’t give up. But here he has written off Castiel and even Mary in the other realm - it’s a level of defeat which is new for Dean and carries the kind of nuances you can probably only have on a 13 season show.