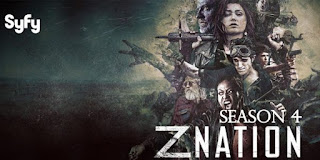 Things are not well in Zona - all these super super super rich people living their ultra-luxurious lifestyle. Am I the only one wondering how these people are supposed to rebuild society? They literally wander around playing rich-people sports and having parties (I question how Zona manages to produce enough booze for all these martinis) how on earth will these people manage to build anything?

Anyway beyond the supposed last survivors of the world and the future of humanity being very very very very boring. Because one drunk driving man manages to run one of the silly golf buggies over one of the guards and kill them. Ok… you can die from being run over by a golf buggy? I thought the golf buggy would come off worse there…

But the dead guard is laid out on the tarmac and the rich pampered minions of Zona… eat him.

So to Murphy, Warren and Dr. Teller. Murphy wants to join many many many many parties of rich people and really doesn’t want to leave the island while Teller warns them that big ominous things are coming but never takes the time to say “hey people are turning into monsters” until they finally actually meet one of Murphy’s friends who is suffering from clear mental degeneration and bashing people in the head with golf clubs
It’s convincing.

He explains that the new vaccine with Murphy blood has some terribad side effects - making people monstrous and deadly. Tiller wants to evacuate Murphy and Warren, as the only unvaccinated people in town

Yes, that includes him. He accepts his own death but wants to save them, leading them to the helicopter, through their Founder’s house who babbles about his grand plans for the world while obviously already infected. This may be a good thing given how ominous his speeches were. Though the flip side is that this may be a whole new plague which could be worrisome. As they leave they also find a room full of Murphy’s blends which Zona have been experimenting on

He also urges Warren to trust her scary burny visions. Ok. We’re doing this, it seems, psychic visions now, before getting them free.

So that ends the Zona storyline and it feels… like a pretty massive anti-climax. This whole ominous storyline has been looming for very very long time and now we finally see this massive, ominous, terrifying force is… full of croquet playing golf-cart riding people and now they’re all dead. In two episodes? Is that it? This could have been a much more ominous storyline and instead seems to have just been handwaved like the writers aren’t interested any more.

And at the Newmerica camp, Lt Huggy (or Mueller as his name actually is, I prefer Huggy) is concerned because the convoy leading to the Newmerica camp is missing. People are getting antsy - as people who have survived the apocalypse by trusting no-one and continually moving around. Staying in one place surrounded by strangers is not popular. So he asks for 2 volunteers to come with him and 2 soldiers to investigate

10k and Doc volunteer because why not - they head to the convoy and find it ominously deserted - which they communicate back to Red and Dr. Sun Mei who are duly concerned but decide to hide it from the other people at the camp. As the soldiers investigate one of them is hit by a sniper and everyone runs for cover

Lots of bullets back and forth and no way to save the dying soldier. The people shooting at them are actually the Zona soldiers in the hut… unfortunately for them it’s 10k shooting back. No-one wants to get in a shooting fight with 10K and one of the Zonas is shot. The remaining force Abby to take his place at the sniper rifle.

Which is bad - no-one wants to get into a shoot out with 10k. We gave classic Z Nation cheese with a bullet being shot out of the air before the wounded soldier is finally mercied - and gets up as a zombie

Despite being shot in the head

Both 10k and Abbie shoot the zombie, not killing it but causing it to run back and forth between them like some kind of weirdly morbid and slightly comedic tennis - until Lt Huggy orders the retreat because UNKILLABLE ZOMBIE. In the aftermath, Abbie manages to escape - but not Lucy


So episode 2 of this season feels like a bit of a reboot. Zona has been removed, the Blends and their issues and Murphy empire dropped: maybe we have a big organisation in Newmerica but we seem almost to be returning to the ragged band of individuals against the world motif.

But with mysteries - the zona plague, the unkillable zombies, people disappearing: it’s a new dynamic. Unexplained weirdness rather than big shadowy organisations