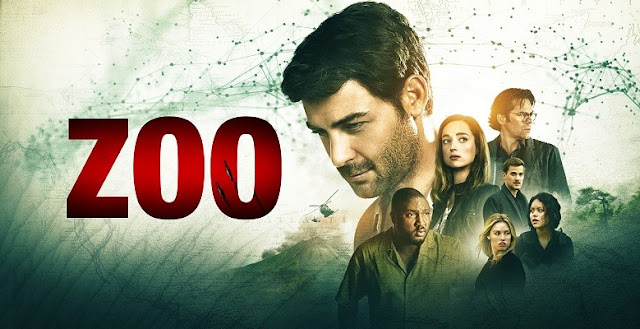 This is the last episode of this season and oh dear gods, guys, I honestly can’t even begin to describe my reaction. Relieved that this is over for at least a season but so damn angry at how damn ridiculous this plot is. I mean the whole season has been a ridiculous problem of endless awful decisions made by people with the intelligence of slime mold coupled with vast plot holes that don’t even begin to make sense but ye gods this may set an award.

So, deep breath - let’s get through this.
Basically the team now has their beacon-turning-off-switch except it doesn’t work. Of course not. Instead Mitch has to use his genius mind with what they have to make a plan b - turn off ALL the Beacons but supercharge the St. Louis Beacon. This will cause all the hybrids to charge to the Beacon which Mitch thinks is fine because that would mean charging through the barrier which is designed to be anti-hybrid so they have a chance to work out how to shut this down (or he does - since Duncan designed them - and Duncan is him) while the wall holds.

It kind of makes sense - if we assume there are absolutely no nests anywhere in the Americas at all. So let’s assume that’s true because REASONS. Let’s face it, it’s hardly the worst logical leap Zoo has made.

After all the requisite shouting and everyone being super angry at Mitch for saving the world and them discussing having to blast the St Louis Beacon (as opposed to it and many many more… because no-one here makes sense), the IADG plans a desperate last defence against the waves of Hybrids, dying and losing ground constantly in a last ditch effort to protect the power supply (Jaime decides to nobly stay with Mitch to help him rather than, y’know, go with the soldiers, Abe and Dariela and fight to the last person. She’s noble like that. Real noble).

But can we address this whole defence? This wall has guns. Not even lights to help them see in the dark. No mines. No artillery. Where’s the US airforce? The hybrids are all razorbacks - planes could literally be flying the length of the wall carpet bombing the horde. In fact why haven’t they been flying over hybrid territory doing that for the last 10 years? How come the US with all of its vast vast military resources can’t do better than a few guys with machine guns?!

And what is this wall made of? How are they breaking through? They’re big dogs, what are they doing to a concrete barrier? And how are they starting fires?! Why did no-one engage some minimal thinking when putting together this plot?

Now we need personal drama: Jackson has managed to get Sam for treatment and to tell Abe all about how Sam is his dead baby son. He can prove this by Abigail’s word and a scrap of yellow blanket. Because it is the only yellow blanket in the entire world ever.

Since the wall is going to be invaded by many hybrids, Mitch insists that Clem and baby save-the-world be evacuated since the whole world depends on the baby and the sterility cure. They do this because it’s sensible (I know I’m shocked too!) but Jackson is furious because the baby is his grandson too… so he… doesn’t want the baby to be safe? And Abe is furious because he’s mid cure synthesis and there’s apparently only one shot at this. For. Reasons.

Oh how much of Zoo can be summed up “for reasons” because there’s just no logical explanation, ever.

Ok… yes? I mean did no-one think to connect that Abigail recorded his woo-woo? Did they think she was doing it for an awesome playlist?

Also note how everyone just totally accepts Jackson’s Dr. Doolittle powers
Jackson’s woo-woo means he can go to the beacon without having his brain fried. Which he does. Tessa goes with him to dramatically waste everyone’s time because without woo-woo she can’t get near the beacon, but nearly killing yourself and forcing Jackson to delay to save her does no-one any favours.

What? We’ve see the hybrids without beacons all season. They’re not herbivorous rabbits - why did they suddenly become so? This makes no sense. For 2 seasons they’ve always attacked on sight.

But hey, this is Zoo

Is the day saved? Nope, because Abigail ambushes Logan and Clem’s evacuation, kills Logan and kidnaps Clem’s baby. Yes Logan is dead. Alas the moment is stolen by how ridiculous this is

How did Abigail know when Clem would be evacuated - or if, since there’s no way she’d know all the other beacons would be turned off. How did she know the exact route. How did she manage to be in exactly the right place. This. Makes. No. Sense. And this is twice Abigail has managed to be in the right place at the right time. Psychic senses and teleportation are now an Abigail power it seems.

So just when everyone thinks the day is saved and the hybrids are no longer a threat, the baby with the sterility cure has been kidnapped

Bonus points, a dog that was killed by one of the hybrids now comes back from the dead as a hybrid and has to be put down

This means each hybrid can turn the animals into a threat and we’re back to season 1 again.

Do you know what would really finish off this season of Zoo? What would really emphasise the sheer ridiculousness of this whole season? AN ACT OF BLITHERING MIND BOGGLING STUPIDITY!

So Jackson puts a great big hole in the barrier by crashing the Implausible Plane into it.

I’m not even going to try to analyse how ridiculous this decision is. It’s so self-evidently ludicrous I CANNOT begin to address it. I’m too busy getting a concussion slamming my head into the desk

Which is really a perfect way to sum up this entire, terrible, inexcusable season. I actually have a headache trying to consider it all. From Dariela & Abe looking to kidnap Clem, to Jamie deciding the best way to investigate the Shepherds is to be arrested for murder. Sam’s continued loyalty to Abigail. The number of times And do we have any idea what Abigail’s motives are? Why does she want to end the world? Throw in plots that just do not make sense - Abigail’s super powers, Duncan/Mitch being the same person, the sheer impossibility of the wall, Sam being Jackson’s grandson. The nests and beacons everywhere without anyone noticing.

It’s nonsensical. Every last episode contains a moment of complete and utter nonsense. Every episode brought more nonsense until the entire plot was not only held together by nonsense - which is a fault of a lot of shoddily written shows - but each episode became nothing but nonsense.

I’m annoyed that a lot of this nonsense put Abe and Dariela - the show’s two main POC (we had Sam appear later… as a villain) - in the back seat for a long time - especially the way Dariela was treated and consistently demonised. In a way she was plot boxed for most of the show without actually disappearing - she was always reduced to the fringe of the group, constantly enduring the hatred and scorn of everyone else. It wasn’t until the end of the season she was able to stand forward again. Throw in Jamie the evil (lots of scorn, bad decisions and mea culpas. She and Dariela could set up a chorus) and Clem the pregnant (to the tank with you!), damselled and plot boxed and it wasn’t great for the female characters either. There continues to be no LGBTQ people - the animals in season 1 seem to have eaten them all.