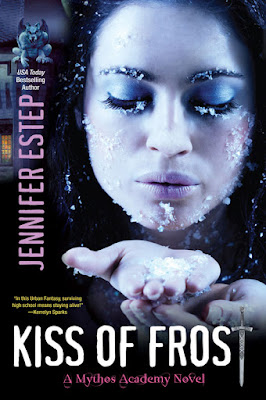 Gwen Frost, with her unique gifts is just beginning to learn her place in the world, and the magical training academy and their long historical war and her special legacy within it and Nike’s champion.


Of course epic history doesn’t change day to day life - including being pulled into the parties that characterise Mythos Academy and her complicated relationship with Logan, the very sexy Spartan warrior.

There’s some fascinating concepts in this book. I like the idea of many many supernatural warriors inheriting divine powers. I like the diversity of their powers. As an massive mythology buff I love the idea of the gods underlying this whole conflict and world building. Norse, Greek and more? Of course I’m into it… though I do rather think the world building rests a lot more on “the Greek gods. And Loki. Because”. I think that because may be because someone looked for an archetypical trickster among the Olympians and realised “all of these fuckers” was the best answer (yes, Dolos of course -but still the Greeks were pretty much all tricksters to some degree in the same way many of the Norse gods moonlighted as warriors)


The whole concept of the school is one I’d be a lot more interested in if it were actually developed a lot more: because instead of seeing all the mythology, history and training we get a lot of partying and Gwen disapproving of said partying because raaah.


We also have Daphne who is a much more interesting character with layers, managing to embrace the partying culture of the school, be “girly” and pink, be a computer geek and being a super strong warrior.


And I do like a lot about Gwen - she has some excellent challenging of the classism that completely permeates the school. I also like to see a character with psychometric powers who doesn’t considered themselves cursed - and even appreciates the knowledge and secrets she learns. There are some excellent foundations to this story


But what was built on this story I have trouble with


I have a lot of trouble getting past the decisions that Gwen makes in this book. No matter how much she wants to prove herself the kickarse warrior like the other students, I find it bemusing that Gwen, who has not been raised as part of a warrior culture, would decide that multiple attempts on her life are totally something she should keep to herself


I would find it bemusing, if she had been raised by a warrior culture, and knowing what is at stake after the last book, that she would consider it appropriate not to tell anyone of the literally murderous threat on campus


And who thinks “I won’t tell my teacher about this LITERAL ASSASSINATION ATTEMPT because I don’t think he likes me”? And she won’t tell the teacher she really likes. Or her grandmother


In fact, I find everyone’s decision making in this book to be utterly bizarre. When a fellow student learns something you don’t want to disclose, do you really think “trying to kill them but not really I want to scare them” is a tactic for silencing them? Especially since you’re doing it anonymously? How do you intimidate someone into silence when they neither know who you are or what you want? And seriously, murder? And, again, this is a campuses where we already explained last book that everyone has been raised to be a warrior, fully expects to be attacked by their enemy and several of them are already used to death. But he thinks ambushes are going to make someone thing “zomg must be silent!” and not “we’re under attack! Sound the alarm!”


And as a people who are constantly under threat why is their security so damn poor? Seriously they all head out on a skiing trip and any evil monster wolf and evil KNOWN BIG BAD can just wander in. And I’m not even touching plot contrivances like the avalanche which can be aimed with laser accuracy to hit just one person


Oh and can someone please justify this damn ridiculous urban fantasy YA nonsense of raising your kid completely ignorant of their powers, their destiny or how to fight when you know they’re going to be


There’s also more nonsense when it comes to their relationship. Because Gwen has the uber hots for Big Bad Spartan Boy who totally can’t be with her for REASONS which means he constantly drives her off by being an arsehole then reels her in again with lots of mixed signals (because it’s a YA romance and we have to play this game and my gods WHY WHY WHY?) and it’s just awful. He also has a representation for sleeping with everyone woman within 800 miles because he’s such a stud. While the woman who has the same reputation is just a raging SlutWhoreJezebel who totally deserves everyone hating her now. Sure Gwen expresses sympathy for her - but it’s not just “she doesn’t deserve this abuse being sexual isn’t wrong” but more “sluts have feelings too”. No. Really. (Gwen also spends a goodly portion of her time pouring scorn on the sexy ways of all these sexy students who are sexily sexing each other.) So Gwen, finally tired of Hot & Broody’s mixed signals finds another hot guy who is interested but Hot & Broody decides to get in the way because of course he does - just because he is driving her away doesn’t mean other men can go near his woman. But it all works out because Hot Competition guy is EVIL and that’ll teach her for daring to look at another man! We will consider your near murder a just punishment for your terrible veering into slutdom.


Let’s sprinkle this hot mess with a gay man who I’m not going to consider a spoiler because having a minor bit character’s sexuality be a shock reveal (despite someone having to be monumentally clueless to not actually see this before hand). Except this character isn’t closeted. Except he is because there’s a whole nonsensical closeted storyline dropped on him without him being in the closet mainly because having the closeted Spartan would have been just too far. Honestly this whole storyline is ill thought out, destructive, horrendously portrayed and honestly can we not? Oh also Gwen decides to say how she totally understands him on account of her magic… which… no. He’s also Asian.


We have Gwen‘s best friend, Daphne Cruz who is latina and actually a woman who is not evil, has some level of complexity and is actually immensely more interesting. It’s a shame she doesn’t have a much more prominent role. We do have other minor POC characters


For extra cringe, all of my comments about how the word “gypsy” is used in the last book still applies for all its awfulness in this book.


There is a lot underlying this that could have made an excellent story - the foundations are there. The world is there. The concept is there… but the plot itself leaves me less than amused