Supernatural, Season 13, Episode 8: The Scorpion and the Frog 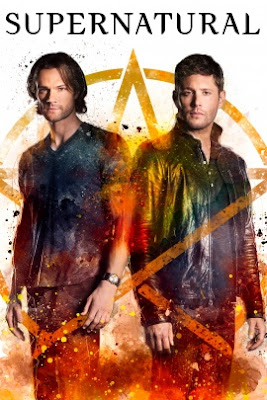 Time for a heist.


Well kind of. Honestly I prefer my heists a little more elaborate.


A demon has managed to steal a spell from a museum. This is a spell for finding a nephilim which just about everyone wants right now. Including Asmodeus who can’t wait to be nuked by a nephilim


But this demon doesn’t want to give it to Asmodeus because he’s a crossroads demon and is not into Colonel Saunders. Instead he’s going to make a deal with Sam and Dean (and killed another demon to do this - which just goes to show how common angel blades are now)


And I have to say now this demon, and his lesser demon lackey, are both weirdly unbothered by the Winchesters. I mean the Winchesters have taken on princes of hell, Lucifer, Crowley and just about everything in between. This crossroad demon and lackey are super confident and even dismissive of Dean giving them the evils. And Dean gives very menacing sexy evils.


Over pie (because he’s done his homework), Demon guy wants Sam and Dean to steal an unspecified something from a collector of magical artefacts and trade it for the spell. He can’t get the shiny himself because the collector is well versed in woo-woo and has demon wards everywhere. Also to get in the vault you need the blood of someone who has been to hell and back - which is (as a nasty flashback reminds us), Dean. Also the collector apparently


Dean does not want to have anything to do with demons, citing Crowley as a reason why not. Which doesn’t make a huge amount of sense because the relationship between Dean and Crowley was a) complicated and b) largely beneficial for Dean.


Sam, though, thinks they should take any chance they can and, hey, they can always kill the demons later.


So we have Sam and Dean with Lackey Demon called Smash and human woman called Grab, but really Alice (it’s possible I’m mixing Smash and Grab up here but hey silly names deserve this little attention). I say again, lackey demon is waaaay too unscared of Dean and his evil eye.


Twist, turns out the collector has woowoo which makes him unkillable in his own home which means Sam can’t stab him to death, lackey demon gets stabbed and Dean shoots him several times doing nothing. But he can punch the guy unconscious. Because lethal damage does nothing but non-lethal is effective? I don’t know. Woowoo


Faced with a lot of booby traps the brothers Winchester take the immortal home owner, tie him up and basically wheel him through the place absorbing all the badness


I have to say I applaud, this was inspired, an awesome parody of Indiana Jones and I want to give the writer a medal. A shiny one.


So they get the box, and Alice has a crush on Dean and reveals, unsurprisingly, that she’s made a deal with the demon. So does the Collector as they try to escape: he reveals he escaped hell by making a deal with this evil demon who did evil things (promising to save his sick son who then died in an accident anyway because Fine Print) by stealing his body. Yes this box of unknown contains the demons bones and if they’re burned this demon is a dead demon.


Y’know I still don’t get the motives here. By all accounts demon bloke could have ignored the collector who seemed content to just keep those bones rather than get involved with Sam and Dean who have a proven record of demon stabbing, a pet angel and enough weapons to kill demons they can literally afford to give one away


The Collector appeals to them pointing out they’re on the side of evil which they act all torn over despite working for, y’know, a demon which meant side of evil should have pretty much been a given anyway. But said demon shows up and thoroughly murders the collector but Sam and Dean refuse to hand over the bones for the spell because they’ve suddenly found Moral Lines They Will Not Cross which would be an important message of Sam and Dean getting back on track and remembering who they are and what they represent except for the whole “this demon was evil always and why is this a surprise” thing
Alice gets threatened to make them co-operate but with some nudging from Dean Alice decides to look out for herself and burn the bones herself so she can declare victory get on a train and hopefully show up as a safecracker/thief joining the Wayward Sisters spin off with her dodgy 90s shoes


This leaves Sam to be sad because the spell was burned but Dean is back to his old self, confident that they’re totally awesome and if this doesn’t work they will find another way and keep on fighting because this is what the Winchesters do.

And that may be the point of this episode - after all the angst of the beginning of the season, this is the Winchesters back on track