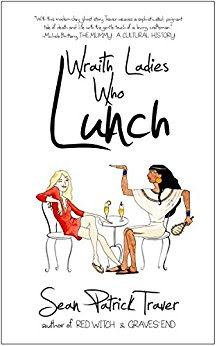 Ta-Senet-Net-Hor has been a ghost for thousands of years, moving with her mummy from location to location, rarely meeting another like herself. Until she met Christabel, a Victorian ghost tethered to a particularly morbid piece of jewellery. Neither understanding their condition, the two spectral ladies agreed to meet for lunch at semi-regular intervals


Until a third ghost enters their circle, Derren Gray, a newly deceased ghost who may provide them with the missing clues to find the truth of their unique natures.


I’ll be honest, I went for this book mainly because of the title. I pictured a rather hilarious collection of historical ghostly ladies of note gathered together, Sex in the City style to have shenanigans and adventures. I could see Queen Elizabeth and Cleopatra and Joan of Arc and Ching Shih all running around spectrally in the modern world doing all kinds of hilarious and silly things. By it's title and cover I expected humour, lightness and shenanigans.


Instead we have a rather deep, powerful book focusing on Ta-senet-net-hor, an Ancient Egyptian woman who has been a ghost for millennia and her infrequent contact with her fellow ghosts (Christabel a Victorian lady and Derren, a much more recently deceased ghost). They talk and often discuss the whys of being a ghost. Why they are ghosts, why other people are not ghosts and the limitations and restrictions of their state. What is noteworthy and interesting is how little they actually know - how their knowledge of ghostliness is all theoretical, despite, in Ta-Senet-Net-Hor’s case, existing for centuries as ghosts.


I like this uncertainty, the fact that the supernatural can be this big unknown even for those supernatural.


This book explores their lives, their own personal development including the often bleak and difficult situation they find themselves in. I like how we get a powerful sense of the frustration and hollowness of ghostly existence without a lot of over the top angst while still maintaining small gems of experience that make this existence still worth clinging to. I like how we examine each character with a careful view of their flaws as much as their virtues, making all three extremely human people


The discovery of the secrets behind their condition is interesting and unexpected as well as the grand revelation of what connects them all as well as the dark secret in Ta-Senet-Net-Hor’s past. I even like the show down scene which, like so much in this book, is restrained, careful, layered and nuanced. There’s no moustache twirling villain. There’s no be-halo’d saint.


It all makes for a fascinating, insightful and well balanced book that is truly artfully crafted


In terms of diversity we had only three characters, but our protagonist is definitely a woman of colour as an Ancient Egyptia


It’s also a short book - unsurprising since it’s a novella. And when I reached the end I was left with a vague sense that I had just read a prologue and was looking for the rest of the story. This book excellently introduced these characters. It excellently introduced a world setting, a concept. It set up our three main characters in a very unique situation - but what do they do from here? What does the future hold for them? What are we going to do with this world, with these characters, with the potential antagonist, with their new understanding and position? Where does it go from here?


In short, with all of this foundation laid, what is actually going to be built on top of it?


But I then question if this is my own bias or unnecessary expectation. Does it need more built on it? In fact, isn’t it a commentary on the generally limited ability of ghosts to affect their lives that these wraiths don’t actually have a narrative. And since, as I’ve said, the book is complex, intelligent, nuanced, fascinating, interesting and a general good read - so it is certainly a deeply satisfying read. I don’t think you can put my desire for more on the book itself so much as on my expectations on what a narrative should look like - my expectations of a forward-moving plot rather than an exploration even when that exploration is extremely good in and of itself.