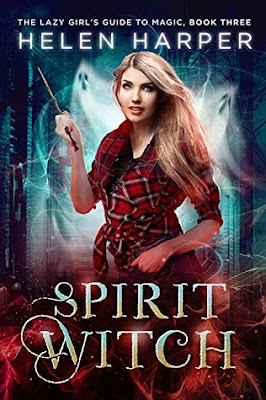 After her brush with Necromancy in Scotland Ivy has been suffering some side effects - she’s not sure of the full implications, but it seems she can see ghosts

Some of these ghosts are not exactly thrilled to have the less-than-motivated Ivy as the one woman who can see them, but you work with what you can since she may be the key to freeing them from their purgatory - and with a serial killer on the loose targetting witches, their ghostly insight can certainly help the Order investigation.

This book ended and apparently this amazing series is a trilogy which means thi is the last book. No-one consulted me on this. I did not agree to this. I do not approve. This is my disapproving face.

But as it has ended, one thing I really liked is that Ivy is still very recognisable as the character who started this series. She’s still the Slouch Witch. She’s still lazy. She still avoids effort.

I’m not saying I’m against character growth or that Ivy hasn’t grown or changed. She has changed and she has grown, she has got involved. She will whine but she will get out there and help when she has to. She would just rather not do it first thing in the morning. Her talent and skill are clear as well as well as her moral compass and even willingness to sacrifice. But so many books would have taken Ivy, had her had a revelation, maybe a training montage and then have her spending late nights reading books or getting up at dawn to go to the gym. Her heroics haven’t turned her into a new person. Even her new powers haven’t driven her to embrace her new purpose in life. She’s still Ivy, laziest witch and I like that because everything that made her so unique is still there and it wasn’t treated as something to remove from the character. Again, I’m not against that kind of character growth, but I like that we kept the very essence of what makes Ivy Ivy

And I do love Ivy. I love that Ivy is such a perfect, ordinary person even if she does have extraordinary powers. Yes she’s fighting evil, yes she’s involved in a dangerous investigation but that core of such normality, that foundation of duvet loving, laziness makes her so relatable and real. And I just love how her talking cat fits into that - I can’t even begin to spoil it even if it isn’t especially plot relevant, it’s just too awesome.

I also like how Raphael has grown over the series - I think he still needs a little more than being the hyper-competent guy who loves Ivy. but in some ways him being this picture-perfect awesome guy he emphasises Ivy’s realness - while not overshadowing her because she can go toe-to-toe with her. I think it’s even intentional because a number of the more side characters have elements which I appreciate: from the simple dedication of the Ipissimus to even designated-rival-bad-guy actually being useful and helpful even while Ivy seethes over it. I like that, I like that even the caricature of awful is still not all bad - and that Ivy isn’t the bigger person to let this go

I’m also loving a depiction of ghosts as annoying pushing nuisances - as well as the whole extremely original concept of how ghosts are created.

Honestly, I need more from this series, because it needs more. This series has already teased a little bit about how magic interacts with the greater world - from reality TV in the last book through to this book showing us witches who are not part of the Order to seeing how the Order’s witches interact with mortal police series. We see a lot of these excellent little little hints of the wider world which just screams for more development. Especially since Ivy, with her general irreverence and not really caring about the Order walks through this, cuts through all the nonsense and ritual in such an excellent fashion.

Diversitywise, sadly the book somewhat falls down. While we have Ivy as an awesome women and some other female characters who are completely undemonised kind of in her orbit (some of the main ghosts she communicates with are women), there’s more men around her than anything else, no meaningful POC and no LGBTQ people at all. It's the main barrier to me utterly fanpoodling this whole series

I’m not overly enamoured of the plot - I mean it’s not bad by any stretch of the imagination - it’s a great, fun story. But the point of this book is Ivy. Ivy is hilarious, fun, and cuts through this plot in awesome fashion, elevating a fairly simple and linear murder mystery to all greater levels, taking these small hints of world building and making me want more through Ivy’s lens. She’s original. She’s fun and she drives the entire book, sprinkling her magic on everything; this cannot end.