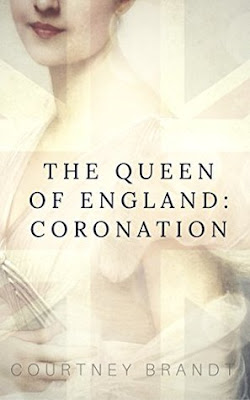 Queen Victoria is dead, killed along with her whole family in a terrible terrorist attack that shook the empire and led to Juliette, young, inexperienced and far from the throne as the next queen

The New World Order has claimed responsibility for the deaths and threatens not just Juliette’s reign but the world itself; Juliette must try to expose this conspiracy while securing her nascent throne, some inconvenient romances and the hunt for Excalibur itself.

Fantastical Steampunk is one of my favourite genres - I do like the whole aesthetic and plot of running around in dirigibles with mechanical arms and steam powered gadgets - but to throw magic, unicorns (unicorns!!!) and arthurian legend in as well and I am sold. We’re taking those elements - magic and machines - and engaged in deadly attempt to take down a shadowy conspiracy that would plunge the whole world into chaos by any means necessary, with battles, shadowy plans and lots of hidden agendas and looking behind every corner for who the enemy is.

If anything I wish this book had explored this more because the world we have laid out here is really excellent. The existence of magic, Excalibur and air ships it all tantalises so much - but that’s kind of the theme of this book: tantalises. We have Excalibur with apparently lots of powers and perhaps its own agenda but we don’t really explore that.

We have a fascinating female crime boss with a shadowy but apparently legitimate past running around doing swashbuckling things… but we don’t really focus on her except as a provider of resources.

We have a society of magic users who apparently follow the legacy of Merlin and have done so for generations - but they’re only mentioned.

A county whose principle resource is unicorns, is in much demand by European nations and appears to be African (it’s not explicitly stated but North Africa was implied), but we only get their prince visiting?

It’s like this whole book throws out a million fascinating storylines, characters, world building etc and we don’t actually spend much time on examining any of these amazing things instead focusing on Juliette

Part of this is because of the general feel of Juliette. I mean, I like Juliette - as a “plucky adventuress uses grit, determination and intelligence to overcome great odds” Steam Punk protagonist she’s great and would fit nicely with characters from Magnificent Devices, The Finishing School Series, Girl Genius, or even early Parasol Protectorate. Her character is fun and embodies many of the elements I love about the protagonists of these series

But she’s the Queen of England. She is the heir to Queen Victoria (who died, presumably early in her reign since there aren’t eleventy million heirs) at the height of the British Empire. This character running off alone, doing lots of things by herself, being on the front lines and generally not being surrounded by a gazillion staff. Even the assumption of a grand conspiracy from the very beginning seems highly dubious on the strength of one terrorist attack. Juliette has 1 maid, 1 aid of her father’s from before she became queen and a military captain - she picks up a couple of others along the way (complete strangers with no background checks which, again, makes no sense!) but this is a ridiculous lack of support for the Queen of England. The whole framing of her character just doesn’t make sense and we have a weird feeling of dodging between being helpless, alone and lacking resources and then jumping back to “I’m the richest and most powerful woman in the world”. It just doesn’t work and it blends with the odd band of misfits she has around her which… also doesn’t work.

There’s also a lot of rather tiresome romance around her: there’s the obvious hot captain is hot and lots of admiring of his body and lots of moment when they get close and kiss and then Not Talk about it and shadowy conspiracy group guys, can we focus? Then there’s the prince hotness who is technically a good political match but no-one ever really explains this beyond UNICORNS and hey horny horses are cool but can we explore why this makes him politically desirable? And she spends time exchanging semi-racy love notes with an anonymous admirer who better not be trying to blackmail her because good gods Your Majesty this is not sound judgement. And it all feels like this time could be better spent on any of the awesomeness above.

Diversitywise we have Prince Hotness and his brother who are POC. Prince Hotness appears a few times, there’s clumsy flirting and he has the potential to be vast important either against or for the conspiracy but he doesn’t make too much of an appearance here to be sure. Ella, the swashbuckling underworld boss is also described as “dark complected” which is vague but could indicate she is a POC. We also have Designated Gay Servant. I suspected he was gay the minute his cravates were described at length. For someone reason gay men in Steampunk are impossibly obsessed with cravates. Cravates are clearly the Grindr of the 19th century (the description of him borders on some pretty heavy stereotypes too). He is fiercely loyal to Juliette because her dad didn’t hate him and he may have had an unrequited crush: making him a loyal servant to him all his life (even working with this man he had a crush on to help him meet and marry his wife which… damn really?) which then transfers to Juliette which. The gay servant is a trope, a poor one especially when they have no life outside of that service. Having your daughter inherit your gay servant just exacerbates things

I’m left feeling like this book has vast potential and some doubts as to whether it will achieve it given the focus of this one. But the foundations have been laid, we have some excellent characters, some intriguing concepts, some excellent world building and an excellently balanced writing style that gets the necessary elaborateness of a steampunk setting without bogging it down - there’s plenty of reasons to follow this series