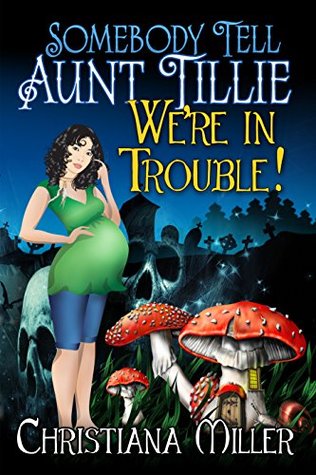 After being possessed by ancestors who were up to no good, Mara's now pregnant with a witch, possibly demon child.  Mara may want the baby but that doesn't mean Paul, her boyfriend who is struggling from post possession disorder is on side. If that were not enough, Gus, the man that she can always count is obsessed with the remains of Lord Grundleshanks - a deceased magical toad. Aunt Tillie knows that things are about to go desperately wrong but can Mara figure it out in time to saver her best friend?

Somebody Tell Aunt Tillie We're In Trouble is the perfect book to pick up to relax on a beautiful lazy S afternoon.  It's light and it's fun and an extremely easy read.  Don't go into expecting anything earth shattering and you should have a good time with it.

Miller did more world building in this second outing for Mara and Gus and we learn that Devil's Point is actually quite aptly named.  Sure, living on top of a hellmouth means that Mara and Gus can work magnificent spells now but maybe just maybe there's a reason there are limits to a witches powers.  Even though Mara and Gus have only recently gotten over their latest bit of trouble with the supernatural, Gus's stubbornness means that they are full steam ahead because after all, rules are meant to broken right?

What makes this book interesting is the constant bickering between Gus and Mara.  They are like wild siblings who love each other but cannot seem to stop snarking. I love that Gus completely supported Mara's choice to keep her baby and even offered to step into the role of father figure in place of the deadbeat Paul,  even though Gus constantly wishing for a boy was somewhat irksome to me.

I really want Gus to have his own life separate from Mara. As it is, he's already picked up his life and moved to Wisconsin because Mara did. Then there's his obsession with every morsel of food Mara puts in her mouth barbecue she's pregnant. It's a stark contrast to Mara's assertions about her body. Throwing out all of Mara's favourite foods because he didn't think she should eat them any longer is crossing a line. Then there's the issue that Gus finally got a boyfriend and of course, it's the devil. They both agree that they want happiness for the other and while their relationship is great, Gus being so intertwined in Mara's life turns him into GBFF and that's a trope. It is further problematic that Miller just had to come up with a reason for these two to kiss. Ummm nope. Let Gus be the gay man that he is.

Mara showed real backbone when she stood up to Paul declaring that since the baby was in her body that it was her choice.  It's not often in media that we have such strong declarations of female reproductive freedom.  I will however say that Miller only chose this stance because Mara had chosen to keep her baby.  Media is generally speaking reluctant to take this tact when a woman is choosing to have an abortion.  I liked that Mara not only justified her decision by claiming her body but that she also told Paul he could choose the level of his interaction with the child.

As for Paul, him going through post traumatic possession disorder while played for laughs at times is actually very important. Quite often, in this genre, characters go through unspeakable things and they seem to just magically bounce back from trauma after trauma with no ill effects. Paul recognising that he needed to seek mental healthcare when dealing with the after effects of having his body possessed is really important, even if he couldn't tell his psychiatrist the whole truth about what was troubling him. Where Paul's trauma did fall down was his concern about the baby having hooves or horns. Yes, to the medical staff it made him seem unstable and it was absolutely played for laughs; however, given that he was possessed by a demon, it's not an unreasonable concern.

While I am enjoying this series thus far, it's well worth noting that there isn't a single person of colour in this particular book.  I know that Wisconsin is the home of cheese and not necessarily brimming with POC but we do actually live in every state in the U.S. I hope that the next book brings some more inclusion.

Miller dropped just enough seeds in Somebody Tell Aunt Tillie We're In Trouble to make me curious about what is going to happen in the next book.  Now that Aunt Tillie is stuck on the mortal plane for instance, will she go back to throwing knives when she's irritated? Will the baby be uber powerful now that it has the toads bone inside its body? You just know that we haven't seen the last of the devil and given that he's written as a trickster God, I wonder how long Mara and Gus will be able to stay one step ahead of him. Whatever happens, I'm sure that hilarious trouble will ensue.

As I mentioned at the beginning, this series isn't something you pick up if you want a serious tome.  It's straight up paranormal chick lit and doesn't try to be anything else. There's something to be said for setting up parameters for a story and sticking to if faithfully. Sure, the characters are hollow and not necessarily well fleshed out, particularly Gus but given what this genre is, it works. So, grab a fancy drink with an umbrella in it, and a beach towel and while away one summer afternoons with shades of the ridiculous with the Toadwitch series.